5 questions about the Interior-EPA, Energy-Water bills 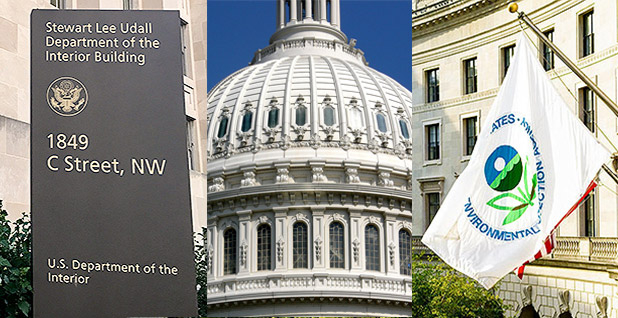 Proposals to reorder the Trump administration’s energy and environmental priorities will come this week as the House unveils its fiscal 2020 spending bills for EPA and the Energy and Interior departments.

Already, House Democrats have backed top-line increases for those measures — 4% for Energy-Water and 4.5% for Interior-EPA.

They’ll outline where those increases will go in legislation being released tomorrow ahead of subcommittee markups Wednesday.

Leading Democratic appropriators have already said they plan a sharp break from the priorities of the White House and GOP lawmakers.

Rep. Betty McCollum (D-Minn.), chairwoman of the House Interior and Environment Appropriations Subcommittee, has said to expect a "significant bump" for EPA.

An increase would be in contrast to Republicans, who have largely flat-funded the regulator, and a White House that wants to cut it by a third.

Eyeing water infrastructure projects, Rep. Marcy Kaptur (D-Ohio), chairwoman of the House Energy and Water Development Appropriations Subcommittee, has said that if President Trump is committed to infrastructure, he could "start" with an Army Corps of Engineers increase.

Here are five questions to consider as House Democrats take the lead in writing the major energy and environmental spending bills for the first time in nearly a decade.

Where will the EPA spending increase go?

After years of fending off cuts, EPA is on target for its first significant increase since Trump took office.

One area certain to do well is the Great Lakes Restoration Initiative, where there is bipartisan support for setting funding at $300 million — not the $30 million proposed by the White House.

Programs aimed at studying climate science also will be a priority for Democrats, after the GOP has tried to curtail them.

Lawmakers have sought to bring more attention to water contaminants per- and polyfluoroalkyl substances, or PFAS, which have been linked to cancer and other health ailments.

McCollum said she backs that effort and is expected to propose more dollars for EPA work on PFAS. She could also add language in the bill ordering the agency to speed up setting a maximum contaminant level for the chemical.

Democrats are likely to propose to limit funding for various EPA efforts aimed at rolling back the Obama-era Clean Power Plan and attempting to set a new national standard for car emissions.

Appropriators might also put the brakes on funding for a proposed reorganization of EPA’s Office of Research and Development.

They worry that plan is an attempt to sideline the Integrated Risk Information System, which assesses the health hazards of chemicals and has long drawn industry criticism.

Will appropriators kill the Interior reorganization and offshore drilling?

An overdue agency reorganization and controversial offshore drilling effort might see their prospects dim further under this year’s spending bill.

New Interior Secretary David Bernhardt already has signaled he is not on board with some elements of his predecessor’s call for reorganizing the agency into regional, military-style commands and moving some land management personnel West.

It seems likely that appropriators, who have been skeptical of the effort, won’t provide much of the $28 million sought to implement it.

Bernhardt is also slow-walking a push for expanding offshore drilling amid legal wrangling and political pushback from several states.

House appropriators could weigh in by limiting funding for the Bureau of Ocean Energy Management, which would oversee that plan as well as politically charged drilling in the Arctic National Wildlife Refuge.

An increase may be coming for the National Park Service, which the Trump administration hopes to cut by 15% to $2.74 billion for fiscal 2020. Democrats have argued at hearings far more is needed, especially to address the agency’s nearly $20 billion maintenance backlog.

Will House appropriators get behind a ‘Manhattan Project’ for clean energy?

Energy Secretary Rick Perry caught many off guard this spring when he said he could get behind a push for a "New Manhattan Project" for clean energy that could become a bipartisan counterweight to the progressive Green New Deal.

House appropriators could make a first down payment on that goal by reversing proposed cuts to the Department of Energy’s Office of Science of $1.1 billion and the Office of Energy Efficiency & Renewable Energy of $2 billion, when compared with their fiscal 2019 enacted numbers.

Those efforts — including more spending on carbon capture and battery storage — are seen by many on Capitol Hill as crucial to accelerating the development of green technologies that will help reduce carbon emissions.

The idea for the ambitious project comes from Sen. Lamar Alexander (R-Tenn.), the chairman of the Senate Energy and Water Development Appropriations Subcommittee, but with the House moving its spending bill first, the effort could take root in the Democratic-controlled chamber.

Will water projects budgets be flooded?

Rep. Mike Simpson (R-Idaho), the top GOP appropriator on the Energy and Water Development Subcommittee, likes to note that every congressional district has an Army Corps of Engineers project in it. But the best advocate for the corps this year might be Mother Nature.

Amid record-breaking floods in the Midwest this spring, the Army Corps of Engineers could be set for a large increase to help fund and manage its long list of overdue flood control projects.

One area where appropriators could direct more money is for a comprehensive study of the lower Missouri River, where some of the worst flooding has occurred.

Simpson is seeking to boost spending by as much as $2 billion this year for the corps, after the White House proposed cutting the agency by 30% from current spending of $7 billion.

Expect a bipartisan push to bump up funding for the Army Corps’ Everglades restoration project, which Trump himself promised after visiting this spring. Backers say they want $200 million in fiscal 2020 compared with the $63 million originally proposed by the White House.

Spending bills aren’t moving in the Senate — yet.

While the House is on course to have introduced more than half of its bills by the end of this week with plans to move them to the floor by June, the Senate has yet to take up any.

Without increasing them, federal agencies would face automatic reductions of tens of billions of dollars come the new fiscal year, Oct. 1.

Those cuts "will be draconian," Shelby told his Senate GOP colleagues during last week’s caucus luncheon, adding that many senators "probably haven’t thought about it much because they think we’re going to take care of it."

House Democrats counter they are moving spending bills under the assumption that Congress will eventually raise the budget caps.

Schedule: The House Appropriations subcommittee markup of the Defense bill is Wednesday, May 15, at 10 a.m. in H-140 Capitol.

Schedule: The House Appropriations subcommittee markup of the Energy-Water bill is Wednesday, May 15, at noon in 2362-B Rayburn.

Schedule: The House Appropriations subcommittee markup of the Interior-EPA bill is Wednesday, May 15, at 2 p.m. in 2008 Rayburn.

Schedule: The Senate Appropriations subcommittee hearing on the Forest Service budget is Wednesday, May 15, at 9:30 a.m. in 124 Dirksen.

Schedule: The House Natural Resources subcommittee hearing on the U.S. Geological Survey and Bureau of Reclamation budget is Thursday, May 16, at 2 p.m. in 1324 Longworth.