5 questions about the surprise deal 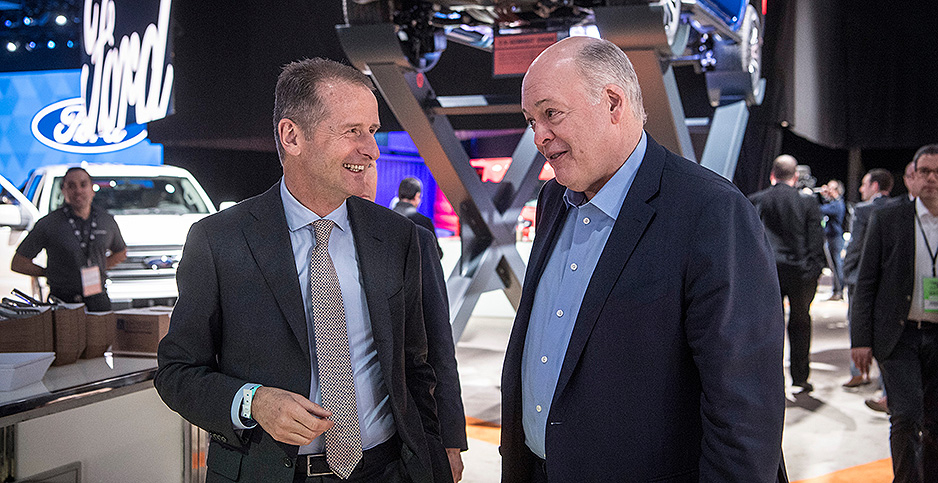 Four major automakers inked a deal with California yesterday to continue improving fuel economy, as the Trump administration drives in the opposite direction.

The deal represents a strong rebuke of President Trump’s plan to roll back Obama-era clean car standards. On a practical level, it could help reduce greenhouse gas emissions from cars and light trucks.

But many key questions remain unanswered. In particular, it’s unclear whether other U.S. automakers will join the compromise in the coming days or whether the deal will have a meaningful impact on curbing planet-warming emissions from transportation.

Here are five of the most pressing questions:

Why is Ford the only U.S. company?

Andrew Linhardt, director of advocacy for the Sierra Club’s Clean Transportation for All campaign, credited the environmental group’s intense pressure campaign on Ford to back strong clean car standards for nudging the company to the table.

"We’ve been pressuring Ford to be a leader on this for quite some time," Linhardt said. "I think our reasoning is that their corporate leadership has always talked about wanting to be an environmental leader and a green company. So I think our work has paid off a little bit on Ford."

GM and FCA are holding their cards close, hedging on whether they would join the compromise in the coming days.

GM spokeswoman Jeannine Ginivan said in an email, "We are driving toward a future of zero crashes, zero emissions and zero congestion. As we have stated, the pathway includes continuously improving fuel economy and our commitment to an all-electric future."

An FCA spokesman said in an email that the company was "not invited to participate" in the deal.

"FCA US is committed to continuing the improvement of our fleet fuel economy," the spokesman said. "We have been clear throughout the federal rulemaking process that the current standards need to be adjusted to reflect changing conditions in the marketplace, and today’s announcement acknowledges that is true."

Under the terms of the deal, the companies agreed to improve the fuel economy of their cars and light trucks by 3.7% each year, with the ultimate goal of achieving 50 mpg on average by model year 2026.

That’s slightly less aggressive than the Obama-era standards, which would have required automakers to improve fuel economy by roughly 5% each year, with the goal of reaching 54.5 mpg in laboratory conditions by 2026.

But it’s significantly more ambitious than Trump’s rollback, which would flatline fuel economy requirements at 2020 levels through 2026, allowing automakers to remain at just 37 mpg.

An analysis by the Rhodium Group, an economic consulting firm, found that the rollback would increase carbon dioxide emissions by 321 million to 931 million metric tons.

Hannah Pitt, a research analyst with Rhodium, said the firm is still crunching the numbers to figure out how the deal would affect emissions.

But Pitt said that "the deal goes a long way to getting states back to the Obama standards. And it helps keep pressure on the four automakers that joined the deal to invest in clean vehicle technologies."

Environmentalists, though, are criticizing the deal for expanding several off-cycle credits that automakers can receive for installing technologies that improve fuel economy but aren’t related to the engine, such as more efficient air conditioning systems.

They call these credits "loopholes" because their benefits aren’t well verified.

"I think this sets a very bad precedent for the future. It locks in and expands a bunch of loopholes," said Dan Becker, director of the Safe Climate Campaign.

"And in terms of the comparison with what the auto companies committed to under the Obama administration, this is probably less than half of the emissions reduction that they committed to," he added.

Does it expose a rift among car companies?

The Alliance of Automobile Manufacturers, a powerful trade association representing 12 companies including Ford and GM, has tried to present a unified front in the face of Trump’s rollback.

The Auto Alliance has consistently argued that all of its members support annual increases in fuel economy that account for market realities, such as weak consumer demand for electric vehicles.

"Automakers have said repeatedly that they support year-over-year increases in fuel economy standards that align with the marketplace, while also advocating for one national program," Gloria Bergquist, a spokeswoman for the group, said in an email when asked for comment on the deal.

But Becker of the Safe Climate Campaign said the deal reveals big fractures among member companies.

"There ain’t no unity anymore in the auto industry," Becker said.

"I guess I’m surprised that General Motors didn’t want to do whatever Ford is doing, both to tell their American consumers and the Chinese," he said. "China is going to demand 25% electric vehicles by 2025. So why would GM tell the Chinese, ‘We don’t really care about that stuff’?"

What does it mean for consumers?

Friedman told lawmakers on the House Energy and Commerce Committee that the proposal would cost new vehicle buyers an additional $3,300 over the life of the vehicle, on average.

In an interview, Friedman said he thinks it’s unfortunate that the compromise includes more gradual improvements in fuel economy and more off-cycle credits. That could slow the rate at which automakers improve gas mileage, thereby raising gas prices for consumers.

"People will certainly be spending more money at the pump," Friedman said. "We’re still running the numbers, but you’ve got to be talking an additional $100 million, if not more, that consumers are going to be spending than they would have under the existing standards."

He added, "It’s not trivial, especially for consumers who are living week to week. They need every penny they can get."

How will the Trump administration respond?

Many observers say the deal is unlikely to change the Trump administration’s course.

"It doesn’t change anything, really, in terms of the path forward," said Tom Pyle, president of the American Energy Alliance.

"The Trump Administration believes strongly in a national fuel standard that promotes safer, cleaner and more affordable vehicles," Deere said in an emailed statement. "The Federal government, not a single state, should set this standard. We are moving forward to finalize a rule for the benefit of all Americans."

EPA spokesman Michael Abboud similarly said the agency is forging ahead with the final rule.

"This voluntary framework is a PR stunt that does nothing to further the one national standard that will provide certainty and relief for American consumers," he said.