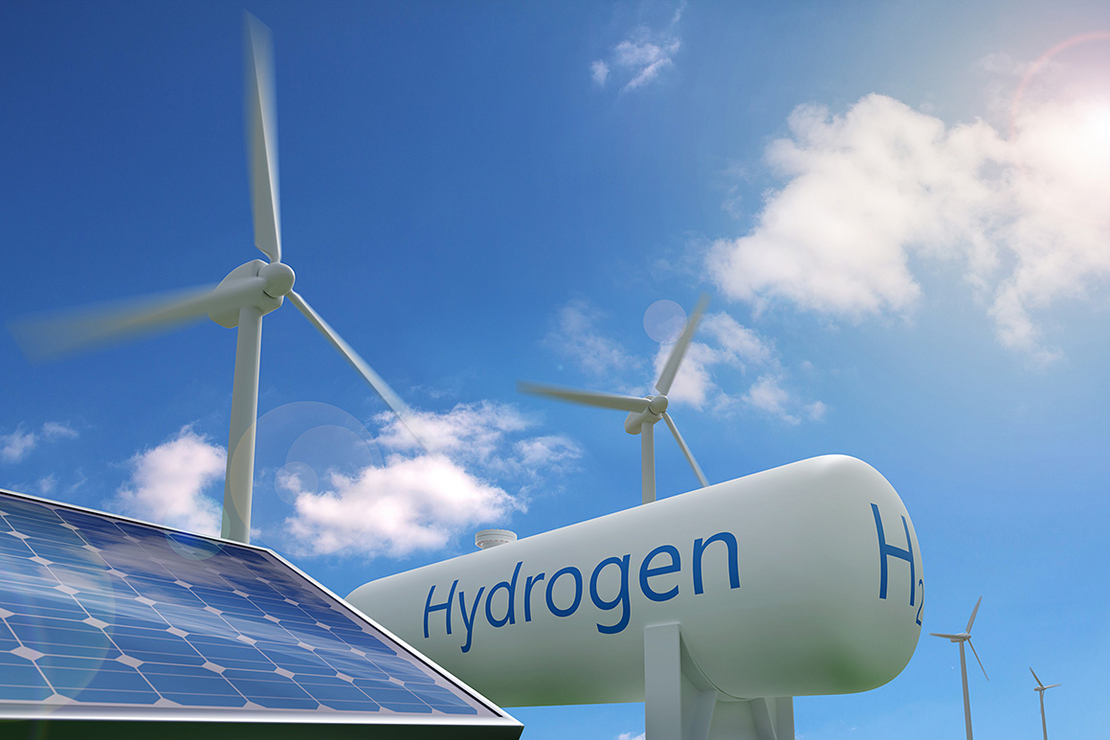 Hydrogen's credentials as a "clean" resource are much debated in policy circles. One way of making it uses solar or wind power and water as the primary feedstocks. jroballo/iStock

Hydrogen’s long crawl into the energy sector mainstream has turned into a sprint the past few years, as the private sector and policymakers champion the idea of creating “hubs” for the fuel’s production.

But what would the hubs do exactly, and would they be as “clean” as envisioned? And will the Biden administration be able to deliver on its promises about hydrogen?

The answers are pivotal for the Department of Energy, which is planning to take a major step next year in testing hydrogen by shelling out billions for the U.S.’s first big demonstrations of low-carbon production, transport, storage and consumption of the fuel.

About $7 billion in infrastructure law funds will flow out to six to 10 of those hydrogen hubs in fall 2023. The department started accepting concept papers for the demonstrations in late September, with full applications due April 7.

“I would say the awareness of policymakers is much improved, compared to even a year ago,” said Lin, who is also CEO at Strategen.

Yet hydrogen’s uses, merits and drawbacks as a climate tool remain opaque to some — not least, for much of the public. In the meantime, questions remain over whether hydrogen can live up to its branding as a low-emissions technology and become cheap fast enough to replace fossil fuels.

Here are five things to watch about “clean” hydrogen’s future in the U.S.:

What do the colors mean anyway?

Of the 10 million metric tons of hydrogen made annually in the U.S., “gray” hydrogen makes up nearly all of it, according to DOE. That color refers to hydrogen extracted from natural gas, usually through a process known as steam methane reformation, which emits CO2. A related but less widely used variant, “brown” hydrogen, uses coal as a feedstock.

Then there are the color variants that Congress and the Biden administration have sought to encourage based on the expectation that they would represent “clean” hydrogen.

“Blue” hydrogen is essentially identical to gray hydrogen, except it pairs natural gas reformation with carbon capture systems. That means it could theoretically be created with a very small or even zero carbon footprint. Its associated emissions, though, would depend on several factors, including the capture unit’s ability to stop carbon from escaping into the atmosphere, emissions from the electricity that powers carbon capture and the amount of methane released upstream during the drilling and extraction of natural gas.

Just one blue hydrogen plant is operating in the U.S. — an Air Products & Chemicals Inc. facility in Port Arthur, Texas — although several others have been proposed in the past few years.

“Turquoise” hydrogen is derived from natural gas as well but uses pyrolysis, which separates carbon from hydrogen in an oxygen-less environment, resulting in a solid form of CO2. Investment is flowing into early projects, including from the Energy Department, which announced a $1.04 billion loan guarantee to a Nebraska-based turquoise hydrogen developer late last year (Energywire, Jan. 3).

“Green” hydrogen typically involves zero-carbon electricity like wind or solar, which is fed into an electrolyzer to extract hydrogen from molecules of water. Of all the hydrogen types, it tends to garner the most widespread support, although only a few small-scale pilots are operational. Those often involve blending the hydrogen into natural gas lines, as is the case with pilots led by gas utilities New Jersey Resources Corp. and CenterPoint Energy in Minnesota, for example.

The “pink” kind of hydrogen is also derived from water, except it uses nuclear power in place of wind or solar. Neither the pink nor green production process emits carbon.

Many of the definitions are blurry, however. For instance, some call nuclear hydrogen “purple” instead of “pink.” And debates are almost sure to arise over terminology used by developers, particularly if they are making hydrogen from a mix of resources or using the grid’s electricity rather than dedicated sources of power generation.

Blue hydrogen plans have come with big price tags. One project in Louisiana, for instance, entails $4.5 billion worth of investment (Energywire, Nov. 16). But analysts at BloombergNEF have projected that green hydrogen will become cheaper than blue hydrogen everywhere in the world by 2030.

What’s the point of a hydrogen ‘hub’?

By 2030, the Energy Department wants the U.S. to make roughly as much of the “clean” type of hydrogen as it does the “gray” kind today, according to a draft of the administration’s hydrogen strategy released in September.

Its reasoning is that low-carbon versions of hydrogen could become deeply useful across a range of applications.

For manufacturing, shipping, aviation and other energy consumers that are considered hard to electrify, hydrogen could substitute for fossil fuels and allow those industries to scale back their carbon emissions, supporters say. And fuel-cell vehicles, including semitrucks and other heavy classes of vehicle, could consume clean hydrogen without a greenhouse gas emissions footprint.

Environmentalists and environmental justice groups tend to support those use cases, as long as the hydrogen is “green” rather than derived from fossil fuels. Other possible applications are more controversial, however.

For instance, power plant turbines could burn hydrogen instead of natural gas as a way of reducing CO2 emissions.

In current generations of turbines, that substitution could drive up emissions of nitrogen oxides, criteria pollutants linked to respiratory illness, however. Some turbine developers are working on future generations of their product that would keep NOx emissions low or zero them out, while running off 100 percent hydrogen (Energywire, June 9).

Major gas utilities also want to blend low-carbon hydrogen into the natural gas lines that provide building heat, along with biomethane and synthetic methane. That would allow utilities to repurpose their gas infrastructure, companies say. Green groups are often deeply critical of that concept, seeing it as a veiled attempt to preserve natural gas’s role in buildings.

The idea is that production, storage and consumption of the low-carbon hydrogen should take place within a particular region — a feature meant to keep down costs, create centers of specialized workforces, and encourage participation from the most efficient and best-positioned companies.

At least two of the hubs must be located in regions of natural gas production, according to the law. Green, blue and pink hydrogen must be produced at one of the hubs, at minimum.

How does the government measure ‘clean’ hydrogen?

Currently, hydrogen production in the U.S. is emissions-intensive. For every kilogram of hydrogen created from natural gas, about 9 kilograms of CO2 is released, on average.

Congress has hinged much of its policy support for hydrogen on scaling back those emissions but not necessarily zeroing them out. And its numbers aren’t always measuring the same thing.

Last year’s infrastructure law defined clean hydrogen as releasing no more than 2 kilograms of CO2 at the point of production for every 1 kilogram of hydrogen. Over the long term, those definitions could grow stricter if federal officials decide to revisit them, according to the law.

The Inflation Reduction Act, which created a production tax credit for clean hydrogen, had a different calculation. Hydrogen’s life-cycle emissions, rather than just those released at the point of production, should not exceed 4 kilograms of CO2 per 1 kilogram of hydrogen in order to be considered clean, under the law.

The life-cycle accounting considers things like natural gas leaked on its way to hydrogen production facilities, the emissions associated with electricity used in carbon capture systems, and fugitive emissions of carbon during its transportation to storage facilities, according to draft guidance from DOE.

The department is still working to finalize that guidance, which will contain fine details for how it counts emissions for hydrogen hub awards (Energywire, Aug. 23).

Xan Fishman, director of energy policy at the Bipartisan Policy Center, noted that for hydrogen developers, the size of federal tax credits for hydrogen production could swing based on the precise details of emissions accounting.

“You’re either achieving a specific benchmark [for carbon emissions] or you’re falling short of it. The consequences if you don’t quite get there are big,” he said.

Who’s after the money?

Anticipation of public funds for hydrogen demonstrations has spurred interest from the private sector and state officials, who have scrambled to broker alliances that could bring home a DOE award, which they say could bring new jobs and tax revenues.

To date, governors, state officials and federal senators from at least 32 states, plus the Navajo Nation, have publicly pledged to advance local proposals for hydrogen hubs.

Industry coalitions without public endorsement from state or federal officials have also emerged in at least seven additional states, as well as the District of Columbia.

Influential politicians from both parties have taken part in the hub coalitions.

Sen. Joe Manchin, the Democratic chair of the Senate’s Energy and Natural Resources Committee, helped convene a blue hydrogen-oriented coalition in West Virginia. Democratic governors like New York’s Kathy Hochul and California’s Gavin Newsom have championed green hydrogen’s role in their own states’ plans. And Mississippi Gov. Tate Reeves, a Republican, asked the Energy Department last year to devote “all available resources” to a $3 billion concept in which solar-derived hydrogen would be stored in an enormous underground salt cavern.

Some of the energy sector’s most powerful players are involved in hub plans, too. They include several of the nation’s biggest power utilities, like Duke Energy Corp. and Dominion Energy Inc. Also involved are the country’s largest natural gas producer, EQT Corp.; officials at the Port of Long Beach and the Port Authority of New York and New Jersey; steelmakers like Cleveland-Cliffs Inc. and Nucor Corp.; and gray hydrogen producers like Linde PLC.

Most of the coalitions have offered relatively scant details on what they are proposing. But some, like those led by California and New York, have emphasized green hydrogen’s role in their plans. Others, like those from Midwest and Southeast states, have referenced the pink or blue types.

Collectively, applicants had requested almost $60 billion in federal funds, while proposing to pair that with an additional $150 billion in private investment, according to DOE.

Could it all go bust?

Still, clean hydrogen’s limited track record offers few clues as to whether things will work out as advocates hope.

The outpouring of dollars into hydrogen and other emerging clean technologies has drawn attention from Republicans in Congress, who are warning of boondoggles and are likely to keep a close eye on the outcome of spending (Greenwire, Oct. 13).

The Government Accountability Office has also raised questions about whether DOE’s Office of Clean Energy Demonstrations, which will administer the hydrogen hubs, can effectively oversee infrastructure law money. The watchdog has cited past examples of carbon capture demonstrations that kept receiving DOE support even as they failed to meet project milestones (Energywire, Aug. 22).

Lin, of the Green Hydrogen Coalition, said she believed that the regional hubs would need to be woven together over time into a nationwide hydrogen industry in order for DOE’s programs to find broad success.

“Once those initial awards are made, the next step will be, ‘OK, how do we work together to stitch together a national hydrogen strategy?'” she said.

But an emerging industry for clean hydrogen would very likely experience failures, said Lin. “In the evolution of any industry, not every project or company is going to make it. That’s just the nature of competition and innovation.

“It’s like Darwin, right? The ones that stay are stronger for it. Going in with that expectation — I think that is a reasonable expectation,” she added.