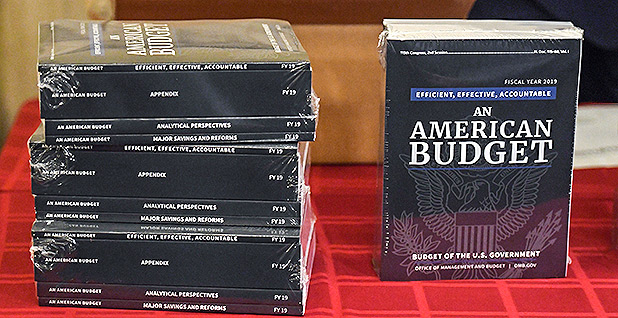 Coming in at more than 1,000 pages, with multiple appendices and tables, the fiscal 2019 federal budget released yesterday seems like an inscrutable spending plan best left for accountants.

But the document also represents and foreshadows a series of trade-offs that could have significant impacts for energy and environmental programs in the coming weeks. Here are numbers to watch:

That’s how many employees the Trump administration hopes to cut at U.S. EPA by reducing its current force from 14,000 to 12,250 in fiscal 2019, according to the budget request.

The documents don’t specify where those reductions would come from nor are they clear on how much the agency would spend on buyouts. And it’s far from certain that the cuts would materialize.

Last year, the agency sought to slash the workforce to 11,600 employees. But Congress has shown little interest in scaling back EPA that far and is expected to largely level-fund the agency for fiscal 2018 at around $8 billion in the upcoming omnibus.

"I don’t think people want to look at environmental protection as something that should be decimated going forward. … People want clean air and water," Rep. John Yarmuth (D-Ky.), the ranking member on the House Budget Committee, told reporters yesterday.

Yarmuth said he’s more concerned about a decline in the morale of workers at agencies like EPA that Trump has targeted. "You have an administration that expresses not much respect for what they do," he said.

The Interior Department says it could spend as much as that over the next 10 years to address its $16 billion deferred maintenance backlog.

About $11 billion would go for national parks and the remainder for national wildlife refuges and Bureau of Indian Education schools, the budget shows.

"The department is taking action to increase revenue from federal energy leasing and development over 2018 budget projections and will keep 50 percent of additional revenue that is not allocated for other purposes, for department infrastructure needs," the budget plan says.

The administration does not precisely say how it will increase energy revenue, although a likely source is offshore drilling, which the Trump team hopes to expand.

In fiscal 2017, Interior collected about $9.6 billion in revenue from energy, mineral, grazing and forestry activities, and that is expected to rise to $11.2 billion by fiscal 2019.

Interior is sensitive to concerns that a new infrastructure fund could be seen by lawmakers as cutting into pots of money for land and water and historical preservation. The budget says a new fund would not take revenue already marked for those other "important purposes."

The most crucial figures in this year’s budget may not be in the 1,304 pages that provide detailed spending breakdowns for every agency but rather in a 26-page addendum hastily assembled by the White House over the last week.

The addendum spells out how the administration wants Congress to allocate the additional $300 billion it approved in discretionary spending last week as part of a two-year budget deal.

EPA would get more than $700 million in additional Superfund spending, the Energy Department would receive $1.5 billion for research and development, and Interior would garner $339 million for national parks and its payment in lieu of taxes program.

Office of Management and Budget Director Mick Mulvaney told reporters the budget may not be "exactly precise" given the recent deal but said the administration did not want to delay it until April or May to fully incorporate the new numbers.

Despite the fluidity of the numbers, Mulvaney argued the budget would not be "dead on arrival" when it reaches Capitol Hill. But he also urged caution in taking too seriously a budget he characterized as a "messaging document."

That’s where the budget would set spending for the Energy Department’s Office of Energy Efficiency and Renewable Energy, which would be less than half its current appropriation of around $2 billion.

Undersecretary of Energy Mark Menezes told reporters on a call yesterday that cuts to DOE’s energy efficiency and renewables program actually stemmed from the program’s success.

He pointed to the falling cost of batteries for electric vehicles, adding that DOE doesn’t need to continue funding commercially deployable technologies.

Instead, DOE is refocusing funding on technologies for which there is a higher risk of recouping investment.

Menezes might have a tough time selling that plan to Capitol Hill. Already, Senate Energy and Natural Resources Chairwoman Lisa Murkowski (R-Alaska), who is also a senior appropriator, said she didn’t like the proposed cut when it first leaked out last week.

That’s the projected deficit for fiscal 2019 and is one budget number the administration is not eager to tout. The blueprint also marks the first time in recent memory a Republican president has outlined a plan that does not balance within 10 years.

He stressed Congress could still choose to make spending cuts but also said the red ink was partly the result of recent tax cuts.

Mulvaney said to expect a spike in the deficit in the next five years because tax revenues are going down, but he added that in future years tax changes will lead to big savings.

If lawmakers don’t buy the OMB chief’s argument, they could look for offsets to help bring down the deficit, potentially hurting energy programs.

In recent years, Congress has sold off portions of the Strategic Petroleum Reserve to save billions of dollars, and there have been pushes to privatize some federal power systems in the West.

A sea of red ink also could make it harder for the House to take up its annual budget resolution, which often outlines nonbinding energy and environmental policies.

House Budget Chairman Steve Womack (R-Ark.) said yesterday he would like the chamber to adopt a budget in 10 years but conceded the GOP is "not there yet."

He suggested Congress could only get to a balanced budget by making changes in entitlement programs, something many lawmakers are reluctant to take on in an election year.