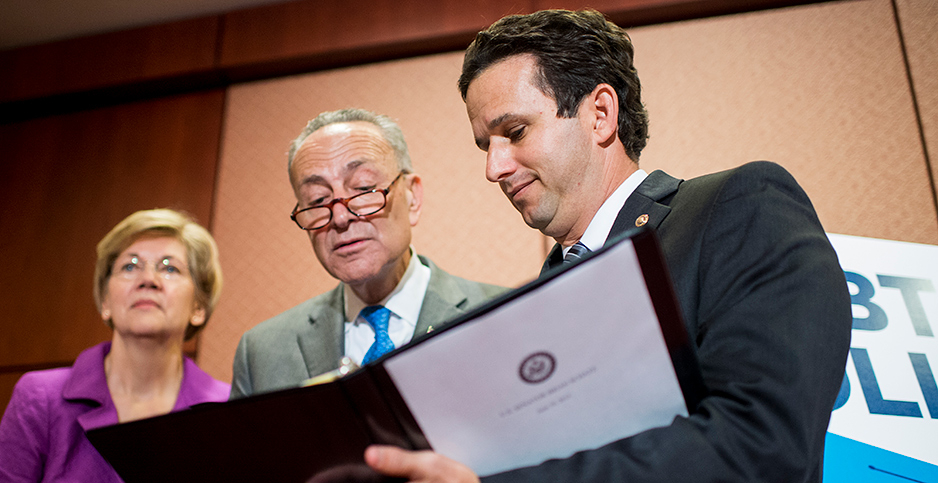 Senate Democrats punctuated their goals on climate change yesterday by rolling out a list of policy recommendations ahead of an election that promises to dictate the nation’s direction on emissions reductions.

Yesterday’s report, at over 200 pages, was written by the Democrats’ Special Committee on the Climate Crisis, formed last year by Minority Leader Chuck Schumer (D-N.Y.) and chaired by Sen. Brian Schatz (D-Hawaii).

It has little chance of becoming law, but it reveals Democratic priorities should the party take control of the Senate and defeat President Trump in November.

A campaign official for former Vice President Joe Biden, who has proposed to enact his own climate plan if he is elected president, praised the document for making climate change "a top priority for our country."

"As president, he will work with Congress to implement a bold agenda that addresses the climate emergency, achieves environmental justice, and creates good-paying, union jobs," campaign spokesman Matt Hill said in a statement.

Here are five takeaways from the Senate report:

The report puts Senate Democrats in the same ballpark as the rest of the party when it comes to climate ambition. But there are differences, and some of them have drawn criticism from progressives.

Biden has proposed to spend $2 trillion on clean energy over four years. Senate Democrats would spend 2% of gross domestic product annually. Over four years that would amount to roughly $1.6 trillion with current GDP estimates.

Biden’s plan also proposes to decarbonize the electricity sector by 2035, while a report from the House Select Committee on the Climate Crisis aims for 2040.

Senate Democrats, however, did not outline interim targets, though the report does aim to hit net-zero emissions globally by 2050.

Unlike Biden and the House select committee, the Senate report does not address leases for fossil fuel extraction on public lands, a priority for the progressive wing of the party.

"It’s pretty lackluster," said Brett Hartl, government affairs director at the Center for Biological Diversity, who was also critical of the House select committee report when it was released earlier this summer (Greenwire, June 30).

"Even if they enacted everything in here, it wouldn’t even come close to solving the climate crisis," he added.

Democrats acknowledged the potential difficulty of getting their ideas through a narrowly divided Senate, even if they control it.

If they win back the chamber, they will likely have fewer than 60 seats, which would allow Republicans to halt climate legislation.

Then there’s Sen. Joe Manchin (D-W.Va.), a coal-state moderate who has historically opposed climate policy. He’s the top Democrat on the Energy and Natural Resources Committee.

The report leaves the door open to developing nuclear power and carbon capture systems as potential climate solutions, a point Manchin’s people were quick to emphasize on Twitter yesterday.

Budget reconciliation, a process that allows certain budget-related legislation to pass with a simple majority, is also on the table. In a bigger move, Schumer in his remarks yesterday left the door open to getting rid of the filibuster.

"We’ve got a budget reconciliation tool that we could use," Sen. Sheldon Whitehouse (D-R.I.) told reporters yesterday. "We’ll have to see how that goes as part of what is on the table."

On the policy side, the report exemplifies the growing popularity of standards for the power and transportation sectors as the mechanisms for long-term decarbonization.

The House select committee outlined a clean energy standard that would decarbonize electricity by 2040, while more tentatively noting that carbon pricing is "not a silver bullet."

The Senate report doesn’t get that specific. It simply says Congress should enact "a federal clean energy standard, emission standards, a carbon price, and/or other market mechanisms to ensure the rapid adoption and scale-up of proven technologies today."

But it does suggest a national zero-emissions vehicle standard for transportation, much like the House document.

Still, Schatz and Whitehouse remain strong supporters of carbon pricing, and the policy may be an appealing option if Democrats do decide to enact climate policy via reconciliation (Climatewire, July 16).

The report offers an extensive look at climate risks to the financial sector, an area that has drawn intense scrutiny from climate advocates in recent years.

"U.S. financial regulators are not doing their jobs when it comes to climate risk," the report says. "They are ignoring the near certainty that climate change will upend the stability of the financial system, the health of the economy, and even the habitability of whole regions of the world."

Much like the report from the House select committee, Senate Democrats make a pitch for federal regulators to require companies to disclose climate risk.

It also suggests the Federal Reserve conduct climate change stress tests on major financial firms to see if they’re prepared for climate shocks, citing the Bank of England as a potential model.

Part of the solution for U.S. regulators could be as simple as joining international efforts, such as the Network for Greening the Financial System.

"The point is not merely that U.S. regulators have a responsibility to catch up to their international colleagues on climate-related financial risks," the report says. "They should want to participate in the ongoing effort to design a collective response to those risks."

The report offers an entire section on the priorities of organized labor, which many Democrats are increasingly hoping to include in their climate bill coalition.

To that end, one of its top-line goals is to create 10 million new jobs. The clean energy transition "cannot come at the price of unionized careers," the report says.

To fix the disparity, the report proposes to tie federal energy grant programs and tax incentives to pro-labor industry policies.

It also outlines long-standing Democratic ideas, such as eliminating hurdles to union organizing and including buy American requirements in potential climate legislation.