5 takeaways from the Dan Brouillette hearing 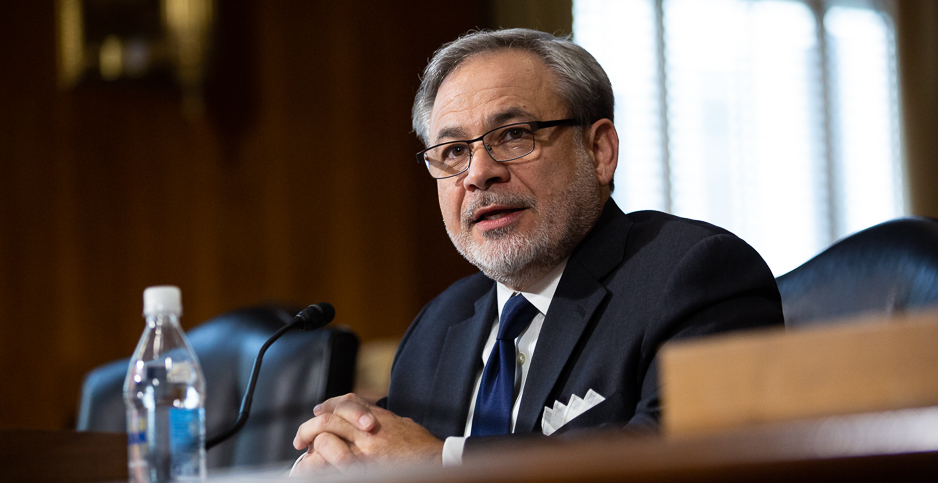 Committee Chairwoman Lisa Murkowski (R-Alaska) told reporters after the hearing that she was hopeful that she’d be able to hold a committee vote next week on Brouillette and other pending nominations for the Interior Department and the Federal Energy Regulatory Commission.

"It’s my intention to move you … just as rapidly as possible," Murkowski said, noting that Perry is scheduled to leave the Energy Department on Dec. 1. "We would like to see a seamless transition."

Members quizzed Brouillette, whom the Senate previously confirmed as deputy secretary in August 2017, about a wide variety of topics and touched on everything from Trump’s proposed budget cuts to his nine children.

Here’s five takeaways from the hearing:

Brouillette pledged to fight for DOE’s budget as senators noted there was considerable congressional support for many of its research and development programs.

The Trump administration last year proposed cutting some DOE programs by more than 50% and called for eliminating the loan program and Advanced Research Projects Agency-Energy. The Senate in many cases has pushed for and secured higher funding for energy programs than the administration wanted (Energywire, March 12).

"The commitments I can give to you are that I will fight for these programs within our department because I think they’re important," Brouillette said. "But it’s also important to understand that I don’t have the final say in what comes over to the United States Senate."

Sen. Bill Cassidy (R-La.), who introduced the Louisiana native at the hearing, gave Brouillette a nod for his diplomacy. "A well-put answer," Cassidy said. "Very tactful, but also very explicit."

Brouillette distanced himself from any involvement with Perry’s participation in an unorthodox diplomatic channel between the United States and Ukraine that is the heart of House Democrats’ impeachment inquiry against Trump.

"I have not been involved in any of the conversations that are related to the House’s inquiry," Brouillette told Sen. Ron Wyden (D-Ore.). He added that "those are not matters that would typically fall to the chief operating officer of the department."

Perry’s role as one of the "three amigos" in the Ukraine scandal has drawn congressional scrutiny (Energywire, Nov. 4).

Lawmakers are probing whether Trump blocked military aid to Ukraine in an effort to pressure the country to investigate political rivals.

And Democrats have sought to determine whether Perry wanted to install political supporters as leaders of a Ukraine natural gas company.

Brouillette insisted his participation on international issues has been of a technical nature to help Ukraine expand and protect its electric grid and pipeline network.

"My role within the department is to run the day-to-day operations," he said, noting that DOE has a nearly $40 billion budget and more than 100,000 federal employees and contractors.

"That, along with nine kids, keeps me pretty busy," he said, as his nine children sat watching the hearing, arrayed behind him.

Perry has said he won’t comply with a House subpoena to turn over documents tied to his involvement with Ukraine, and under questioning from Sen. Mazie Hirono (D-Hawaii), Brouillette gave himself a potential out on complying with subpoenas.

He noted that he pledged under oath that he would make himself available to Congress but added that if he were subpoenaed to appear before Congress, he would first consult with executive branch counsel.

"Assuming that the subpoena was properly served and there was the opportunity to be represented by executive branch counsel, I would make myself available," he said.

Perry refused to testify behind closed doors to the three committees conducting the impeachment inquiry, with his spokeswoman saying he would not participate "in a secret star chamber inquisition where agency counsel is forbidden to be present."

Also under Hirono’s questioning, Brouillette pledged to uphold the federal law that protects government whistleblowers and said the department is reviewing its contracts to ensure that a whistleblower provision is included.

Republicans, including Trump, have sought to identify the whistleblower who confidentially told Congress in August that Trump pressured Ukraine to dig up dirt on a political opponent, triggering the impeachment hearings.

"So it must cause you some concern then that there are all these calls for the disclosure of the whistleblower," Hirono said, citing Brouillette’s support for the whistleblower statute. She didn’t wait for an answer.

Absent from the hearing were questions about Brouillette’s plans for grid resilience — an issue Perry and top administration officials used to try to advance a strategy to aid economically struggling coal and nuclear plants.

The deputy secretary touched on the issue during his opening remarks and again during a back-and-forth with Sen. Martin Heinrich (D-N.M.) about the department’s work on transmission lines.

After the hearing, he told a gaggle of reporters that resilience would still be a priority under his watch at the department.

"Until we get to a point where battery storage is grid-scale, and that will enable the adoption of more renewable energy, we must have baseload power all throughout the country," Brouillette said. "That will continue to be a priority for us at the department."

The bulk of policy initiatives, Brouillette indicated, appear focused on understanding a holistic approach on the grid and its resilience through a modeling effort underway in the Office of Electricity.

The department has missed numerous deadlines for updating energy efficiency standards for household products, and Brouillette pledged to lawmakers that he’d commit to improving its record.

The promise came as Heinrich told him one of his "frustrations" with the department has been lack of attention to the congressionally mandated energy savings standards, which he said have been "incredibly productive economically" and save his constituents $400 a year.

But, Heinrich added, the standards that are credited with cutting greenhouse gas emissions "have not always gotten the attention that they are due."

Critics have accused the department of backtracking on energy efficiency by allowing old-style lightbulbs to stay on the market and say the administration is readying changes to more rules that could make it harder to reduce greenhouse gas emissions (Energywire, Nov. 12).

Heinrich said he believes the department has missed at least 19 legal deadlines, "and some are more than three years late." Brouillette told him he would commit to DOE’s meeting its legal standards.

The hearing also offered Sen. Catherine Cortez Masto (D-Nev.) the opportunity to press DOE on the potential for a Yucca Mountain nuclear waste repository restart at the department.

The stalled facility has long been opposed by the state of Nevada and its Capitol Hill lawmakers, who deem it unsafe and unworkable.

The Obama administration moved to shutter the site in 2010, but the Trump administration has said it would like to restart the project along with advancing an interim storage solution for some of the nation’s more than 80,000 metric tons of nuclear waste.

Brouillette deferred the Yucca Mountain question to Congress by arguing he was bound by law to pursue the Yucca site but that he could not do so without the funding. Congress has not provided any new money for the site for most of this decade.

"At the moment, I can give you the assurance that in the near term as secretary, until the Congress makes a decision on Yucca Mountain, nothing will happen at the Department of Energy," Brouillette told Cortez Masto.

In addition to the Yucca guidance, Brouillette also committed to maintaining the agreement struck between Cortez Masto and Perry to remove from the state a half-metric ton of weapons-grade plutonium that Nevada officials alleged was shipped to the Nevada National Security Site. Brouillette said he would honor the push to begin removal of that material by 2021.