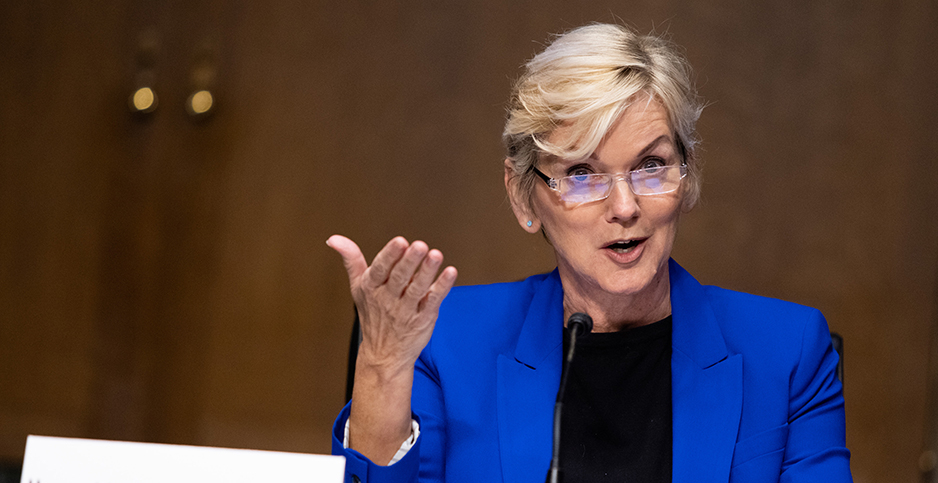 Granholm, the former Rust Belt governor, sought to assure skeptical Republicans she’s "obsessed with creating good-paying jobs." During her confirmation hearing before the Energy and Natural Resources Committee, they asked her what Biden’s plans will do for coal communities and other fossil fuel workers.

But despite strong concerns from the GOP about the Biden agenda, Granholm appears likely to glide toward a relatively easy confirmation (Greenwire, Jan. 27).

Granholm would be only the second woman to serve as Energy secretary and would play a leading role in Biden’s efforts to reach a goal of net-zero carbon emissions by 2050.

The former two-term Michigan governor found herself in familiar circumstances. Three of the senators on the panel are also former governors, including incoming Chairman Joe Manchin (D-W.Va.), who called Granholm someone he could work with.

As did Sen. John Hoeven (R-N.D.), who noted he had enjoyed working with Granholm as a governor. "You were a tremendous leader then, and I believe you will be a strong leader for the Department of Energy," he said.

Granholm offered an olive branch of sorts to Republicans when she committed to Sen. Mike Lee (R-Utah) that she would not interfere with approvals of liquefied natural gas exports.

LNG exports became one of the Trump administration’s signature policy achievements as it helped launch a wave of approvals through a reworked, streamlined process.

Fearing the Biden administration may walk those changes back, Lee pressed Granholm about "how your climate considerations might be factored into that analysis" on gas exports. Granholm told the committee she would follow the public interest requirements demanded by federal law.

"The Natural Gas Act of 1938 dictates the requirements and the considerations, and I would certainly abide by that act, including issues related to whether something is in the public interest, what the economics are, what the geopolitical concerns are," she said.

Granholm added that in some cases, like regarding certain small-scale exports to Caribbean islands, the approval could prove a net climate benefit compared with other fuels the country may use.

"I would also want to work with the natural gas providers to see if we could continue to reduce greenhouse gas emissions at the point of production," she added.

Sen. Angus King (I-Maine) said too much LNG export may drive up domestic prices. King warned Granholm to use that economic calculation in her public interest determination as well.

"The balancing test that’s required under the Natural Gas Act, that would be one of the things we would look at," Granholm told King.

Granholm set the stage for a return to Obama-era nuclear waste policies, including a repudiation of the controversial Yucca Mountain waste repository in Nevada.

"The administration opposes the use of Yucca Mountain for storage of nuclear waste," Granholm told Sen. Catherine Cortez Masto (D-Nev.).

The nominee’s statement aligns with Biden’s previous denunciation of the project, which the Obama administration moved to cancel in 2010.

The Trump administration had attempted to resurrect the shuttered facility, only to be rebuffed by President Trump himself, who flip-flopped on the issue for political purposes last February.

In its place, Granholm said DOE would return to the recommendations of a blue ribbon commission, whose findings in 2013 called for a consent-based siting approach to interim and long-term storage of waste. Federal law and spending limitations have made implementing that strategy difficult.

"It is a very sticky situation, and clearly we have to maybe look at what the blue ribbon commission did on this, which was to engage in some consensus, site-based strategies that allow us to determine where that waste should go," Granholm said.

Lawmakers have increasingly taken notice of the impasse, especially as more than 80,000 metric tons of waste piles up at reactor sites across the country.

"We really do have to be honest with ourselves about the fact that what we have now are maybe 100 effective high-level nuclear sites scattered around the country, and that’s not safe from national security or from the environmental point of view," King said.

With so much of the Biden administration’s job ambitions based on clean energy and the electric vehicle build-out, Republican senators pressed Granholm on her views of critical minerals, which are important for solar panels, wind turbines and batteries.

The issue had been a priority for the Trump administration, especially as it attempted to keep up with trade imbalances with China. Republicans and Democrats have raised the issue as a potential national security problem.

"This, to me, is as significant as anything going forward when you think about vulnerabilities and American security … because we rely on other countries that are, perhaps, not reliable friends — this places us in a vulnerable position," said Sen. Lisa Murkowski (R-Alaska).

Murkowski and Manchin included a paired-down critical mineral title in their energy bill last month. While it does not go as far as Murkowski’s original proposal, backers say it has the potential to jolt the Department of Energy’s role in critical minerals.

Granholm said, "If we allow for China to corner the market on lithium or for the Democratic Republic of Congo to be the place where everybody gets cobalt when there may be child labor or human rights violations associated with that supply, then we are missing a massive opportunity for our own security but also for our market, for our trading partners who also may want to have access to minerals that are produced in a responsible way."

The former governor added she was "enthusiastically supportive" of DOE’s role in critical minerals "for both jobs and energy security and supply chain security in the United States."

Republicans also pressed her on whether she would back needed policy options to help revitalize the domestic uranium production industry.

Granholm confirmed to lawmakers that she would follow through with an initial appropriation of $75 million to establish a national uranium reserve — a priority first launched by the Trump administration.

Granholm pledged to make grid security a priority, noting the U.S. has more than 5 million miles of distribution wires and 200,000 miles of high-voltage electricity wires.

She said she had not yet been fully briefed on the massive SolarWinds cyber hack but added that she hopes hardening of the grid will be part of the upcoming infrastructure package.

"We’re getting hacked all the time and attacked all the time," Granholm said. "We will have, inside of the DOE, a person at a very high level that is responsible for making sure that the response to this is coordinated. We have to harden our electric grid for protection of our energy system."

"I think it puts our electric grid at greater risk for cyberattacks," Murkowski said. "I’m concerned about that. I think this entire committee is concerned about where we are with the reliability and the resilience of the grid when it comes to cyber."

Biden suspended the Trump order aimed at banning grid equipment sourced from foreign nations deemed a security risk, though it is not clear if Biden plans to overturn the order following a 90-day suspension.

On his first day in office, Biden directed DOE and director of the Office of Management and Budget to consider whether to recommend a replacement.

While supply chain worries have long been a concern — and some utility executives were aware the Trump administration had been working on the issue — the Trump White House made the announcement with little consultation from top grid officials (Energywire, Jan. 26).

Granholm also pushed back on Sen. John Barrasso (R-Wyo.), the committee’s incoming ranking member, who pinned the blame for California’s blackouts last August on the state’s reliance on renewable energy.

"No one wants to see a repeat of California failures," Barrasso said. "So can you point to any state agencies or electric grid operators or utilities that have committed to use such aggressive goals without warning people of the risks that they face if they try to clamp it down?"

Granholm, who lived in California in the past year and taught at the University of California, Berkeley, noted the blackouts were mostly the result of high winds and hotter temperatures spurred by climate change.

"It was less about the security of the grid and more about what was happening because of the warming of the planet and the cause of the additional fire danger," she said, adding, "I want to be able to reach across and be a partner in achieving the technologies to get there."

Granholm, who as governor embraced electric vehicles to help Michigan’s recession-wracked auto industry, said she hopes to boost DOE’s research and development efforts on EVs and their batteries.

"We can buy electric car batteries from Asia, or we can make them in America," Granholm said, as Sen. Debbie Stabenow (D-Mich.) noted that of the 142 lithium-ion battery megafactories currently under construction, 107 are in China.

"Best car ever," she said. "I just love these electric vehicles. I drive on sunshine. I have solar panels on my roof and plug the car in. It’s just amazing, and I hope we can have universal acceptance and deployment of EVs."

But Granholm said she realized there is still "range anxiety" — the concern of EV users that their vehicle may run out of juice before reaching the next charging station.

"We want to make sure people can drive from coast to coast and stop everywhere in between and feel like they’re not jeopardizing their freedom of mobility," Granholm said.

She added she hoped to work with Biden Transportation secretary nominee Pete Buttigieg to see that the 550,000 EV charging stations Biden has promised by 2030 are installed.

She sidestepped Barrasso when he asked whether she would support banning the sales of new vehicles with internal combustion engines by 2035, as California Gov. Gavin Newsom has done.

"I do drive the Chevy Volt, and it’s been amazing and the best car I’ve ever had, with incredible power," she said. "I would love to see a big goal, and I know it’s going to take us awhile to get there and sometimes leaders have to set big goals to move things in the direction that they would like to see."

Granholm added that the auto industry — in the U.S. and abroad — is already making investments in electric vehicles, "and it’s very exciting to see." Manchin, however, added a bolt of skepticism.

"I will say that President Biden does enjoy a Corvette that makes a lot of noise," Manchin said, referring to the combustion-powered muscle car. "I do, too. That’s going to be around for a while. I don’t think he has any intention of selling his, either."