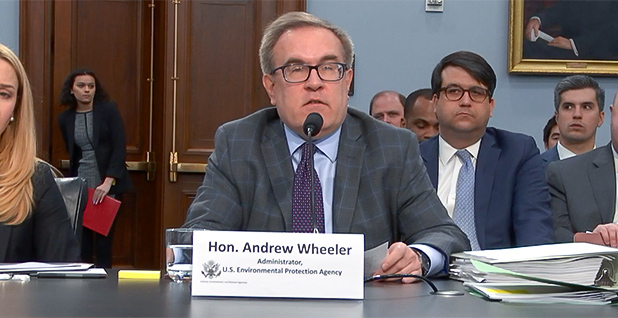 EPA Administrator Andrew Wheeler found himself on the defensive yesterday as House Democrats bashed proposals for slashing the agency’s budget and warned him against pursuing regulatory rollbacks.

"I think the EPA does have a role to play in protecting our air and water. We were making it clear that some of the Obama administration rules that were in place are a part of the EPA’s charter to protect air and water," House Interior-EPA Appropriations Subcommittee Chairwoman Betty McCollum (D-Minn.) told E&E News after the two-hour hearing.

McCollum said she would push for a "significant bump" for EPA when she writes her panel’s fiscal 2020 spending bill. She does not yet have a date for the markup but expects to have the legislation ready for floor action in June.

Here are five takeaways from Wheeler’s first congressional hearing since his Senate confirmation earlier this year.

Last week, President Trump said at a Michigan campaign rally he would fully fund the Great Lakes Restoration Initiative. His budget plan for fiscal 2020, however, would only give $30 million for the effort — or about 10% of its current funding.

Under questioning from Rep. David Joyce (R-Ohio), the subcommittee’s ranking member, Wheeler said he agreed with the president’s remarks and that EPA was working with the Office of Management and Budget on how best to address Trump’s directive.

The cleanup program would receive $300 million under the changed plan, according to Wheeler. In addition, the EPA chief said he was working on coordinating a joint visit to the Great Lakes with Canada’s environment minister.

Wheeler reminisced about growing up in Ohio.

"I believe I am the only EPA administrator in the history of the agency to go swimming in the Great Lakes," Wheeler said at yesterday’s hearing. "I love the Great Lakes."

Joyce also remembered his childhood when he went swimming in Lake Erie.

"I’m amazed I still have any hair," Joyce jokingly said. "We have come a long way since those days with the restoration initiative and the efforts we have done."

Wheeler largely sidestepped talk about EPA action on climate change, not even using the word "climate" in his seven-page opening statement.

While mentioning that EPA would be a global leader on clean air and safe drinking water, Wheeler was far more comfortable talking about regulatory changes underway at the agency.

Democratic appropriator Chellie Pingree from Maine tried to goad Wheeler on climate change, noting he had recently said he does not see global warming as a top environmental threat.

"If this isn’t an existential threat, I don’t know what is," she told the EPA chief.

Wheeler did not bite and denied Democratic charges that the Trump administration dismantled President Obama’s signature climate initiative, the Clean Power Plan. He said the Supreme Court opted to put that effort to curb emissions on hold.

Wheeler said he’s concerned that about 40% of EPA employees will be eligible for retirement within the next five years.

"We’re trying" to replace them, said Wheeler, who added that he had been personally involved with the recent hiring of the agency’s first permanent chief of human resources in several years.

But Wheeler conceded that for every new employee walking in the door, there seems to be another leaving.

Rep. Mike Quigley (D-Ill.) said more than 100 employees have left EPA’s Region 5 over the past year and that few of the scientists, program managers and other personnel have been replaced.

He said some of the difficultly in filling openings and keeping employees may come from frustration among workers with Trump environmental policies.

Democrats asked Wheeler to provide them a detailed strategic plan for hiring and recruiting workers during the next several years.

"To say I am concerned about this action is an understatement," Lowey said of an administration plan that would in effect freeze plans to reduce tailpipe emissions by keeping them at 2020 levels through 2026.

She asked Wheeler whether he could name a single car manufacturer that supported the rollback, which has caused some angst in the automotive community because it could lead to a state-by-state regulatory approach for emissions.

Wheeler did not name an auto manufacturer but said car companies were paying penalties or using credits to get around Obama standards. He insisted any new approach would still cut emissions, lead to savings for car buyers and have the support of most states.

Lowey’s concerns, though, suggest EPA’s plan might not get far.

The chairwoman could seek to use this year’s spending bill to block the Trump administration from spending any dollars for overhauling car emissions rules.

A year ago, Wheeler’s predecessor at EPA, Scott Pruitt, was having a much more difficult time on Capitol Hill.

In a single day, he testified at not one but two congressional hearings. Both rooms were packed as he fought for his political life, pushing back against various ethics allegations and facing calls to resign.

The story was much different yesterday for Wheeler at his inaugural appearance since his confirmation as EPA chief. Much of lawmakers’ questioning centered on EPA policies rather than him personally. Rows of seats sat empty.

Toward the end of the hearing, Rep. Mike Simpson (R-Idaho) lightheartedly asked Wheeler whether EPA really cared about the environment.

Simpson quipped in return, "Because if you just walked into the middle of a hearing, you would never know it."

McCollum quickly countered that Democratic disagreements with the agency were about policy, not EPA officials’ motivations.

"I do believe EPA cares about the environment, but it is just the way we prioritize some of the work that we do" oppose, McCollum said, clarifying that Simpson’s comments did not apply to her.

Wheeler is back on Capitol Hill, this time appearing before the Senate Appropriations Interior and Environment Subcommittee. And ranking member Tom Udall (D-N.M.) will not mince words in opposing EPA’s budget request.

"I’m tired of the now-commonplace responses from representatives of this administration in our budget hearings," Udall will say, according to prepared remarks.

"We hear repeatedly, year after year, that they would be – quote – ‘happy to work with Congress on final spending levels.’ It’s a wink and the nod that the budget request isn’t really real. But that makes a mockery of our process."