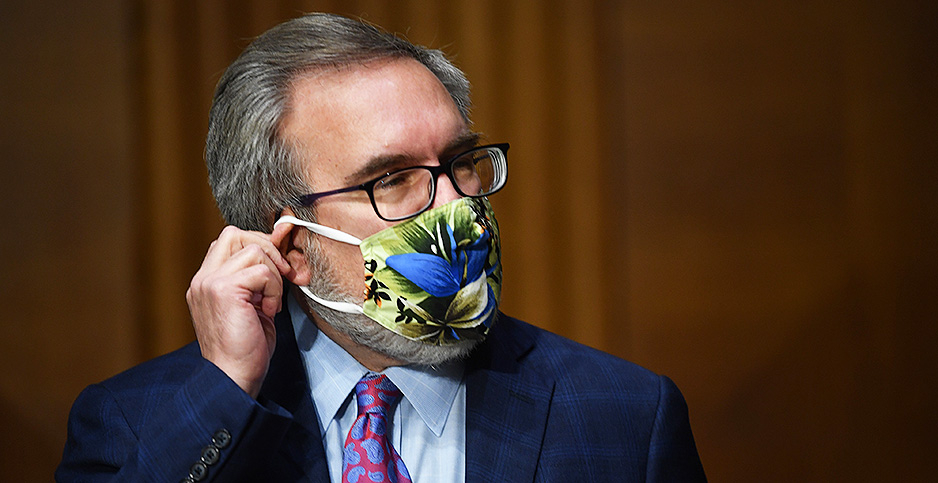 EPA Administrator Andrew Wheeler yesterday mounted a fierce defense of his agency as it has grappled with the COVID-19 pandemic.

Wheeler had a full quarantine beard and was positioned at the far end of the hearing room, opposite some of the his fiercest critics on the Senate Environment and Public Works Committee.

Wheeler took questions on a variety of issues, but the pandemic was the topic of concern. Here are five takeaways:

The virus is an EPA problem

EPA can expect more questions from lawmakers in the years to come about how it has responded to the COVID-19 pandemic.

For Democrats, the novel coronavirus has become a unique environmental problem linked to climate change and air pollution.

Republicans have sought to downplay those concerns while pushing for regulatory relief from the environmental agency to jump-start the slowing economy.

Sen. Tom Carper (D-Del.), the panel’s ranking member, asked Wheeler if EPA would factor in the coronavirus into future rulemakings.

Markey called on the EPA administrator to apologize to minority populations, who are more likely to live in heavily polluted neighborhoods and have had a higher death rate from the virus.

But Wheeler and GOP senators questioned a Harvard University study cited by Democrats that has linked a higher coronavirus death rate with those living with increased air pollution.

Barrasso also added at the end of hearing that the virus has had environmental benefits, including reduced carbon emissions.

"Emissions are down significantly because of the diminished amount of commerce," Barrasso said.

Democrats used yesterday’s hearing to shed more light on the industry players behind the Trump EPA’s rollbacks of various rules.

Sen. Sheldon Whitehouse (D-R.I.) asked a number of questions on whether Wheeler or EPA staff had met with Marathon Petroleum to discuss the Safer Affordable Fuel-Efficient (SAFE) Vehicles Rule.

The regulation pulls back tougher Obama-era auto fuel economy standards and could be a boon for oil companies if Americans pay more at the gasoline pump.

"This was not done on behalf of any oil company at all," Wheeler said.

Wheeler himself was a lobbyist for various industry interests before coming to EPA under the Trump administration, which Democrats hammered on during his confirmation process.

Whitehouse also linked an EPA proposal that would limit the use of scientific studies in drafting the agency’s regulations to long-ago tobacco lobbying.

"I was not aware of the link to the tobacco lobbying in the ’90s," Wheeler said, adding that he understood that the EPA proposal was based on legislation sponsored by former Rep. Lamar Smith (R-Texas).

Republicans turned to Wheeler at yesterday’s hearing to help prop up their favored businesses during the pandemic.

That exposed what has become a common split in the GOP caucus between farm-state and oil-patch lawmakers — with EPA caught in the middle, thanks to its management of the renewable fuel standard program.

Barrasso said he was troubled by EPA’s record on the RFS and needs to provide relief to refiners. The senator signed on to a letter sent to Wheeler earlier this week saying that the agency should reduce biofuel blending requirements for oil refiners.

"The consequences of the decisions that have been made by the EPA are going to be devastating for communities in Wyoming and elsewhere," said the committee’s chairman.

But Wheeler also heard from Sen. Joni Ernst (R-Iowa), another panel member, at yesterday’s hearing, who said the biofuel industry is hurting, too, during the pandemic.

"Just as oil has lost demand due to people staying home and not traveling as much, so has ethanol," Ernst said.

In his opening remarks, Wheeler dropped a fact that caught little attention from senators in light of all the focus on COVID: EPA has hired hundreds of employees and plans to hire hundreds more despite the pandemic.

"We have also not let this deter our efforts to hire," Wheeler said.

The EPA administrator said the agency has added 335 new employees "during this time" and plans to bring on another 200 staff members by the end of June.

"EPA employees have risen to the test of carrying out their duties during this challenging time, and I applaud all of them," Wheeler said.

EPA’s staffing has been on the decline during the Trump administration. Hundreds have left through buyouts and retirements, and employees complain of low morale.

Each year, Trump has proposed deep budget cuts for the agency, including earlier this year, before the pandemic took hold. Those plans have been ignored by Congress in the past, but the EPA workforce would shrink dramatically if they came to fruition.

Yesterday’s hearing was slated to focus on the president’s budget plan. The administration proposed close to $6.7 billion for EPA in fiscal 2021, slashing more than 26% of the agency’s current funds. It was instead only mentioned in passing, as the main focus was the health crisis.

Congressional oversight of EPA during a global pandemic is tough. Social distancing kept Wheeler physically far away from the lawmakers, for one thing.

Carper, who has dogged the Trump EPA as ranking member on the EPW panel, said Wheeler must have been 100 yards away from the dais.

And like many Americans who are teleworking to help stop the spread of the coronavirus, several Democratic senators chose to pipe into the hearing via video conference. That led to some technical glitches that interrupted the hearing’s flow.

Whitehouse’s questions were cut off. Sen. Kirsten Gillibrand’s (D-N.Y.) audio was even worse until she grabbed some earbuds with a microphone and then came in loud and clear. Duckworth quickly turned off an alarm off camera as her questions came to an end.

At times, Wheeler had trouble hearing some senators’ questions coming over the video feed. He also remarked a few times that he didn’t know where to look.