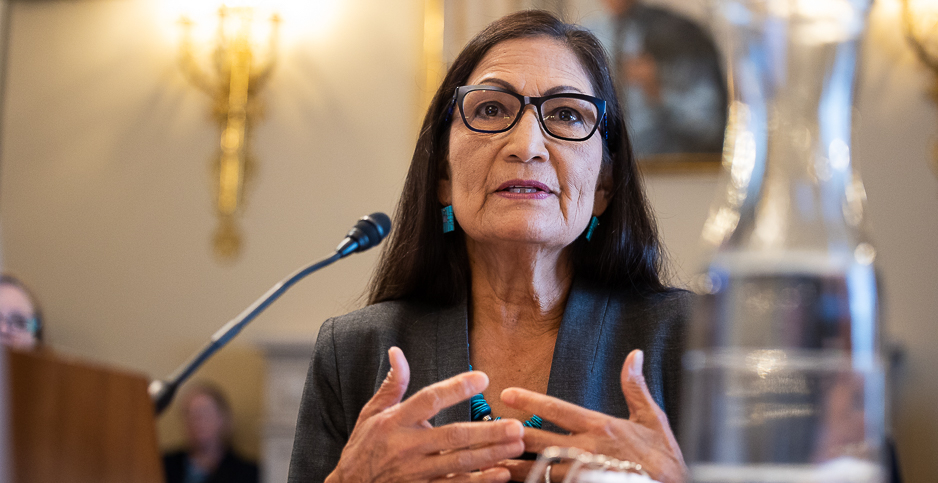 Interior Secretary Deb Haaland offered a bit of news on her return to Capitol Hill yesterday, telling members of a panel she once served on she didn’t expect her agency to place a permanent ban on new drilling in public lands.

But that wasn’t all. In her appearance before the House Natural Resources Committee, where she was once the second-most-senior Democrat, she was grilled on drought resources, monument designation in Western states, document request backlogs and the administration’s ambitious conservation efforts.

Often she frustrated her critics by refusing to make promises or offer specifics, prompting Republicans to demand a "simple ‘yes’ or ‘no.’" But there were a few instances where Haaland made some revealing admissions.

Below are five of them.

No plan for a drilling ban

Members of both parties, but especially Republicans, were eager to hear from Haaland on the fate of the federal oil and gas leasing program.

The president’s order to "pause" the issuing of new leases for drilling on federal lands has been among the most divisive actions of the Biden Interior Department so far, and a forthcoming report from the agency will determine whether that pause will continue or morph into some all-out ban.

Rep. Doug Lamborn (R-Colo.) was among the multiple members who sought, without success, to get Haaland to commit to a date for when the long-anticipated report will be released and what it will recommend.

Haaland would simply say to expect the report to be made public in "early summer," but she did offer some hope to opponents of the leasing freeze: "I don’t think the plan right now is for a permanent ban," she said.

"As I have said many times," Haaland continued, "oil and gas production will continue well into the future, and we believe that is the reality of our economy and the world we’re living in."

Haaland also repeated that the current pause only affected new leases, not the "more than 8,000 leases to drill that are not currently being used as of yet" across "millions of acres" of public land.

The Interior secretary got an earful from both Republicans and Democrats about the Biden administration’s approach to managing the drought that has ravaged the West, including California, which has nine representatives serving on the House Natural Resources Committee.

"Your budget request includes no funding for new water storage capacity despite the severe drought conditions that we’re suffering in the West," said California Republican Rep. Tom McClintock. "I wonder how can the administration expect to address our Western water crisis without proposing any funding for long-term water storage."

Democrats told Haaland they also were displeased that the White House’s fiscal 2022 budget request did not include enough investments to mitigate drought damage, in fact proposing cuts to several water conservation grant programs known as Title XVI and WaterSMART.

"We need to plus them up," said Rep. Jim Costa, a California Democrat. "I want you to urge every bit of creativity and thinking out of the box."

Rep. Jared Huffman, another Democrat from California, also implored Haaland to reconsider: "This drought I think does merit recommendation of some of the budget amounts for Title XVI and WaterSMART. … To see that line item actually decrease in the budget was troubling."

Haaland ultimately signaled she’d heard the message, though it’s congressional appropriators, not the administration, that will determine spending levels for these initiatives.

Congress should feel free to legislate on monuments

Another decision lawmakers were eager to hear about is one relating to two Utah monuments — Bears Ears and Grand Staircase-Escalante. The protections around both were significantly weakened during the Trump administration, and environmentalists are urging President Biden to restore them.

Haaland has reportedly recommended Biden use his executive authority under the Antiquities Act to institute more protections around Bears Ears and Grand Staircase-Escalante.

When asked about that recommendation, Haaland found ways to demure — Interior has neither confirmed nor denied that such recommendations were made — and wouldn’t say when Biden would make an announcement on his decision.

But she appeared to express support for a meeting, or some formal communication, with members of the Utah congressional delegation and the president beforehand, a request Utah lawmakers say has so far gone unanswered.

Haaland told Republican Rep. Blake Moore of Utah: "We’re happy to make sure that [Biden] knows of your request … and I’m happy to let the White House know that you have requested that again."

Moore, representing the delegation’s unanimous opposition to making changes to the two monuments’ boundaries, also asked Haaland whether she supported changes to national monuments through "executive fiat or a legislative solution."

Haaland replied that, "as a former member of Congress, I understand the value of legislation. That’s what you do. And I wholeheartedly support your decision to move ahead with any legislation if that’s what you choose to do."

The outlook on oversight

Unsurprisingly, Haaland agreed to be responsive to Natural Resources Committee requests for information relevant to its authority to conduct oversight on the Interior Department.

After all, Haaland knows from experience how difficult it was at times to pry information from her predecessors at the agency: One of her document requests during the Trump years at one point resulted in hundreds of pages of unrelated documents written in the nonsense wingdings font (E&E Daily, Jan. 12).

Her commitment to "be as responsive as we possibly can" was cheered by Committee Chairman Raúl Grijalva (D-Ariz.), who said this marked a "day-night change from what the majority had to endure over the last two years in terms of access to Interior."

But Haaland warned that a backlog was occurring at Interior, where "now we are processing oversight requests from the last administration," including those "requests from the chairman that were unfulfilled in the previous Congress."

Haaland also cautioned that Interior was busy fulfilling requests from "seven full committee chairs in the House [who] have written to our department requesting documents related to Jan. 6," the date when a violent mob stormed the Capitol to protest the congressional certification of the 2020 presidential election that favored Biden over former President Trump.

Haaland stayed largely on message yesterday, and perhaps there’s no better example of that than her refusal to refer to the Biden administration’s ambitious conservation goal by its original name.

Several times, Haaland was asked by Republicans about the "30×30" plan, which refers to the administration’s mission to conserve 30% of all U.S. lands and waters by the year 2030.

In each instance, Haaland — who was a lead sponsor of a 30×30 resolution as a member of Congress — replied by alluding to the "America the Beautiful" initiative.

"America the Beautiful" constitutes the rebranding of 30×30 first rolled out this past spring, when the administration put forward a report of "principles" for how the federal government would go about achieving the mandate.

The rebranding was intended to soften the image of "30×30," which conservatives are calling a "federal land grab" that would "lock up" multiple-use opportunities largely across the West. Proponents of the effort insist this isn’t the case, and Haaland took opportunities to make that plug as well.

"How much additional land being locked up by the federal government is appropriate?" Rep. Tom Tiffany (R-Wis.) asked Haaland.

"Are you speaking about the ‘America the Beautiful’ initiative?" she replied.

Tiffany said he was not. Haaland still proceeded as though he was.