5 things to know about the global race to net zero 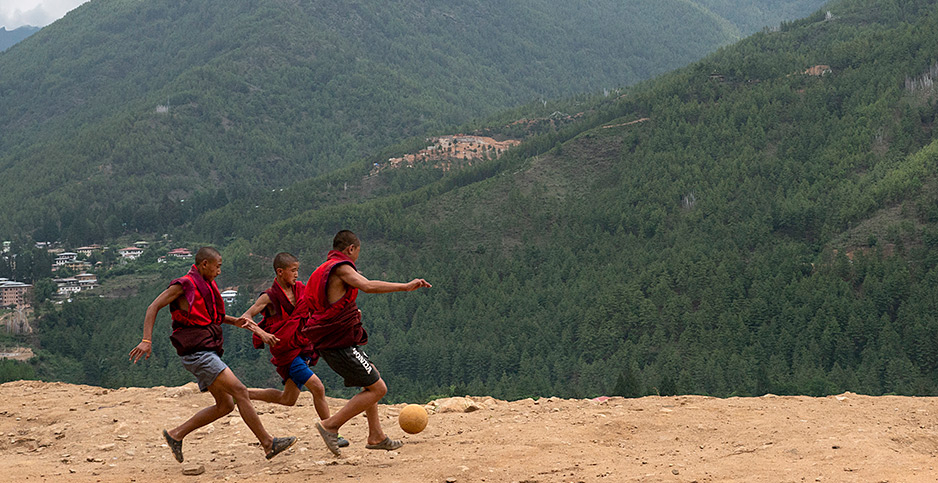 Monks play soccer in Bhutan, a largely forested nation on the southern slopes of the Himalayan mountains. Bhutan is the first country in the world to reach its net-zero goal. Paula Bronstein/Getty Images for Lumix

The concept of net zero is increasingly a global phenomenon. It has risen to the top of climate summit agendas, guided presidential campaigns and offered a worldwide rallying cry against climate change.

The idea gained traction after a 2018 report from the Intergovernmental Panel on Climate Change (IPCC) examined what the world would look like if people stopped releasing more emissions than they sequestered. The answer was tantalizing: It could prevent the worst ecological consequences of global warming.

Many of the world’s biggest emitters responded by setting net-zero targets. It didn’t stop there. A coalition of cities, regions, businesses and investors have also joined a United Nations campaign called the Race to Zero.

U.N. Secretary-General António Guterres has called for a "global coalition" for carbon neutrality. At the same time, critics say net-zero targets are hollow, allow too much dependence on offsets and detract from the urgent action that’s needed to transition to clean energy.

So what does it mean to reach net zero? Which countries have set the strongest targets? And if more don’t, is it possible to keep temperatures from rising past the point of no return?

Here are five things to know about net zero based on a discussion with the World Resources Institute (WRI).

Net zero means more emissions are removed from the atmosphere than expelled into it.

To achieve that target, human-caused emissions need to be reduced as much as possible — but it’s unlikely they can be stopped entirely. Carbon from sectors like agriculture and aviation will be hard to remove completely.

This is where the "net" comes in.

Whatever emissions remain need to be balanced by carbon removals from natural sinks, such as trees or soils, or emerging technical solutions like direct air capture and storage, said Katie Ross, an associate with WRI’s climate program.

Not all gases are treated equally. Scientific modelling by IPCC considered the cost and difficulty of abating different gases, and it found that carbon dioxide emissions would need to reach zero by 2052 — at the latest. The remaining greenhouse gases need to get there between 2063 and 2068.

Achieving net zero will require "fundamental and unprecedented transformations" across all sectors of the economy, said Ross.

A recent net-zero report from the International Energy Agency illustrates the extent of those shifts. According to its projections, by 2035, sales of gasoline- and diesel-powered cars will need to cease; coal plants without carbon capture will need to be phased out by 2040; and nearly 90% of electricity will need to come from renewables by midcentury.

Significant changes will be needed in the land sector, too, such as halting deforestation and restoring degraded lands. A report by WRI shows that the pace of change needs to be far greater than it is currently, with renewables ramped up six times faster and coal power phased out five times more quickly.

There’s something else. All scenarios for reaching net zero require a lot of carbon removal.

Fifty-nine countries representing 54% of global emissions have communicated net-zero targets, according to WRI’s Climate Watch database. That’s different from the U.N.’s calculation, which shows that at least 110 countries have committed to that goal.

Either way, it accounts for a vast majority of global carbon output — but still not enough. IEA says current net-zero pledges cover 70% of global emissions. That’s short of what’s needed to limit worldwide temperature increases to the pathways modeled by IPCC (Climatewire, May 18).

Most of the 59 pledges identified by Climate Watch aim for 2050. Some countries, like Sweden, want to reach net zero earlier. Germany recently moved up its end date from 2050 to 2045. China, the world’s largest current emitter, has set its target for 2060.

About half have put those targets in a policy document, but few have set them into law. Around 35% of global emissions are covered by pledges that are not formally adopted, said Mengpin Ge, with WRI’s climate program.

Momentum for net zero has grown quickly. Before 2020, fewer than 20 countries had set net-zero targets, according to Climate Watch. Bhutan was the first — with a trend-setting 2015 commitment. It is the only country to have already reached net zero and says it will remain there in perpetuity.

There are valid concerns

A growing chorus of critics have raised concerns about the credibility of the target — since reaching net zero will require technologies currently in development and the balancing of carbon sinks, which have limits.

A study published in Nature found that nature-based solutions, such as forest planting, shouldn’t be implemented at the expense of other measures.

Ross of WRI also expressed concerns about political accountability. Because many of the targets are set for 30 years in the future, it raises questions about whether they’re a distraction from the change required now, since the politicians setting them today won’t be responsible for meeting them in 2050.

Robust net-zero pledges should have clear targets and pathways for achieving them, Ross said. They should cover all greenhouse gases and sectors; explain how much of the target is met by domestic emissions reductions; and avoid or limit the use of international carbon offsets, particularly because by midcentury, when most countries will be approaching target deadlines, there will be limits on how many international offsets are available, she said.

While most net-zero pledges cover all greenhouse gases and sectors, very few countries have specified whether they will meet them using international offsets.

"Where the rubber really hits the road is the importance of net-zero targets informing near-term milestones," Ross said.

The world has already warmed by more than 1 degree Celsius compared to preindustrial levels, but research shows that rising temperatures can be stopped before reaching 1.5 C.

International finance will be crucial for helping developing countries make the transition to clean energy, but the economics of doing so are making more sense as the costs of solar and wind fall below those of fossil fuels.

Also promising to observers is the range of economies at different stages of development that are setting net-zero targets. They include small island states like the Marshall Islands and Fiji as well as the U.S. and Canada.

Offsets will continue to be problematic, but Ross of WRI said a country’s ability to achieve net zero will depend on how much land is available to sequester carbon and what technologies are available to it. An island state like Singapore, for example, has limited land resources and will be constrained without the use of offsets.

"We’re seeing lots of countries talk about net zero, and some begin to set some concrete goals around it, but there’s a huge range," said Thomas Hale, public policy professor at Oxford University’s Blavatnick School of Government and co-author of a global assessment of net-zero targets.

"What we need to see is countries begin moving from aspirational or soft commitments to actually putting it into their planning documents and NDCs, into long-term strategies, and ultimately into laws and policies," he added, referring to a county’s nationally determined contribution under the Paris Agreement.