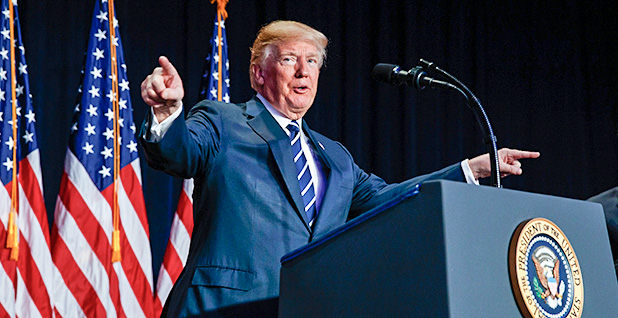 The White House’s proposal matters because it offers a glimpse into the administration’s priorities — marching orders for congressional Republicans who will likely ignore most of them anyway.

Although Congress will likely disregard the specific spending levels — as it largely did with Trump’s first budget request last year — nominees for some of the hundreds of vacant executive branch appointments will have to answer for these choices when they face the Senate. And officials already in place will have refreshed directions from the top.

Whether Trump’s budget resets the agenda, or whether it lands with a thud, could depend on these things:

The administration called last year for slashing 31 percent from U.S. EPA’s spending and 29 percent from the State Department. That met immediate and blunt resistance in Congress.

Lawmakers from both parties found it hard to take the budget proposal seriously because it called for deeply cutting or eliminating spending on programs like hazard mitigation grants, the Superfund program, the Chemical Safety Board and National Flood Insurance Program mapping.

The House did vote to approve smaller cuts to agencies the White House targeted, including $800 million in cuts to EPA, Interior and related programs — far less than the $2.6 billion cut proposed for EPA alone.

The Senate hasn’t passed its own appropriations bills yet — and lawmakers now have an extra $141 billion to spend on fiscal 2018 and fiscal 2019, thanks to last week’s budget deal.

The White House scrambled to write the last-minute extra money into its request, according to Bloomberg. One thing to watch will be whether the same cuts emerge despite the overall spending boost.

Early signs point to some repeated cuts, in spirit if not in the exact figures.

Last year, Republican appropriators brushed back against the White House’s proposal to slash the Department of Energy’s efficiency programs. Now, leaked drafts suggest the White House will propose even steeper cuts to DOE’s Office of Energy Efficiency and Renewable Energy — a 72 percent reduction.

Some industry groups have already pushed back. And Republicans aren’t planning to go along with it (E&E Daily, Feb. 7).

That’s good news for environmentalists looking to leverage gaps between the administration and its usual allies.

How does science and research funding fare?

Research into the state of climate change and measures to mitigate it depends on research funded by a constellation of federal agencies, from NASA to DOE.

Along with DOE’s efficiency research programs, the fate of the Advanced Research Projects Agency-Energy will be closely watched. So will programs at NOAA, the Department of Agriculture and the National Science Foundation aimed at data collection and research grants.

Under Trump’s budget last year, NASA would have seen its $115 million Office of Education cut, with that portfolio shifted to the research-oriented Science Mission Directorate, but without any additional funds. Five Earth science missions would have been scrapped, including one to monitor carbon dioxide.

EPA’s Office of Research and Development faced steep cuts last year, and it could be a target again now.

Could specific cuts (or hikes) trickle down into midterm races?

One reason Trump’s budget came under fire last year was because it targeted programs with clear constituencies, like the Appalachian Regional Commission, Chesapeake Bay cleanup and Native American programs.

"The material in last year’s budget was so politically tone-deaf," said Slesinger. He added that a Republican president shouldn’t propose lowering indigenous tribal money for Alaska when Sen. Lisa Murkowski (R-Alaska) oversees the Natural Resources Committee and its Appropriations subcommittee.

With nine months until lawmakers face midterm voters, those kinds of cuts could emerge as campaign issues — especially for the vulnerable members in the House Climate Solutions Caucus.

The budget promises to offer details about the Interior Department’s reorganization. It could also reprise the administration’s proposed cuts to programs many voters and donors recognize, like Energy Star.

"It’s a small program, but it has a huge amount of support," said Katherine Hamilton, chairwoman of 38 North Solutions, a lobbying firm that represents several renewable energy and environmental groups.

Will infrastructure-related agencies get a boost?

Energy companies are hoping to get a piece of the administration’s infrastructure push — with the grid and pipelines offering some options that would require minimal federal investment.

But cuts to corresponding agencies could undercut those prospects.

Transportation Secretary Elaine Chao has been one of the administration’s most high-profile officials on the infrastructure push. Last year, Trump’s budget called for a $2.6 billion (13 percent) reduction in her agency.

Cutting Interior, EPA and DOE staff could also slow interstate projects at a time when the administration has emphasized approving projects more quickly.

How does it treat the Paris accord and other Obama climate policies?

Elgie Holstein, senior director of strategic planning at the Environmental Defense Fund, said the administration might explicitly say it won’t be paying for work on an Obama-era climate deal that Trump has pledged to exit.

"We would expect that there would be limited or even no money available for the participation in the Paris climate accord," Holstein said.

The budget document could also offer hints on how EPA plans to replace the Clean Power Plan. Last year’s budget proposed cutting off funding for the implementation of President Obama’s signature climate rule.

"Do we target it? Sure," Mulvaney told reporters in May. "Do a lot of the EPA reductions [aim] at reducing the focus on climate science? Yes. Does it mean that we are anti-science? Absolutely not."