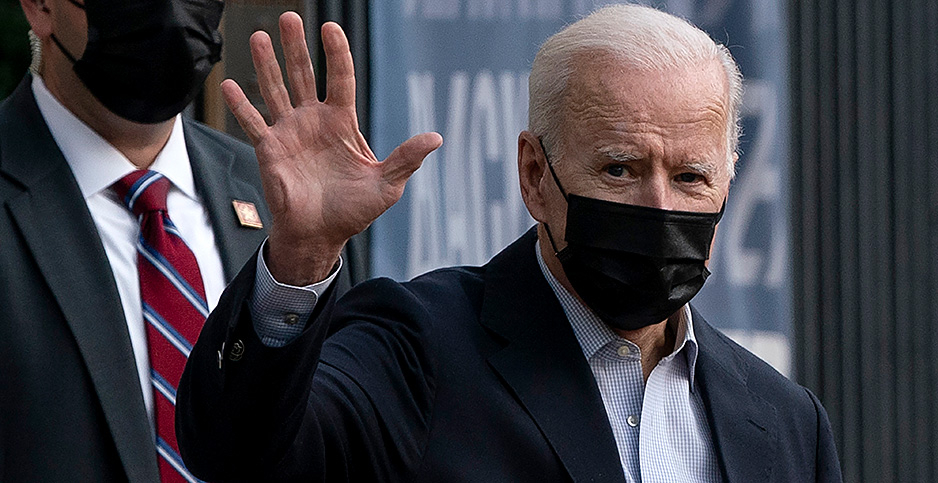 President Biden’s first budget proposal sketches a vision for greening the entire federal government, and it includes areas that have been traditional afterthoughts to climate policy, such as prisons.

His $1.4 billion environmental justice plan, for example, calls for $39 million to repair Bureau of Prisons buildings, the preliminary budget says, "in a manner that improves conditions of confinement and enhances environmental sustainability."

That’s far from the only instance. Biden has promised a whole-of-government approach to climate, and his budget is full of initiatives — both expected and unexpected — that underscore that ambition.

To be sure, much of Biden’s proposal remains in flux. Some of the specifics await the administration’s full budget proposal later this spring, including details for the agencies directly responsible for executing Biden’s climate agenda. And all spending ultimately is decided by Congress. But in the limited terms available, Biden’s so-called skinny budget outlines a sprawling process of decarbonization.

Biden is asking Congress for a $14 billion increase to climate programs. That’s more than he’s proposing to boost programs on immigration and asylum (about $1.4 billion), the opioid epidemic ($3.9 billion) or tribal health and housing ($3.1 billion).

Biden’s climate bump is also greater than the increase he proposed for the Pentagon, though his total national security budget would rise by almost the same amount, about $13 billion.

His plan suggests the administration is juggling several pressing priorities. Climate comes second to education in Biden’s plan, which calls for a $20 billion increase to grants for high-poverty schools.

Coupled with Biden’s $2 trillion infrastructure plan, his budget could kick-start climate policy across the country. It remains to be seen, though, if Congress will give him what he wants — as well as if any future agreement would be enough to cut emissions in half by 2030, the deadline scientists have set for averting catastrophic warming.

Biden’s budget would invest in one of his most ambitious climate policies — the clean electricity standard — which aims to move the nation’s electrical grid toward carbon-free power in the next decade.

The White House proposal includes a $2 billion plan to build a clean energy projects and workforce initiative at the Department of Energy, which would put to work "welders, electricians and other skilled labor" building the transmission lines, solar arrays, wind turbines, electric vehicle charging stations and elements of the new grid.

A senior administration official on Friday acknowledged that the outline was more symbolic and called it a "complementary but separate proposal" to Biden’s infrastructure plans.

"This is the beginning of a long appropriations process that the president’s budget will influence. I think it will set a tone," the official said.

In Biden’s $2.3 trillion infrastructure proposal, he laid out the framework of a plan to get to a carbon-free grid by 2035. If passed by Congress, the clean electricity standard would require utilities to shift the nation’s power grid toward more renewables in an unprecedentedly tight time frame. More than a dozen states have either adapted or committed to a standard.

Even with an initial round of funding behind it, a clean electricity standard faces a steep hurdle to get through Congress, where Democrats only can lose a handful of votes and where some moderates have been resistant to policy that curtails the use of fossil fuels. If the standard doesn’t survive Congress, it would be more of an aspirational goal than a government mandate.

Transportation is the single largest source of U.S. emissions, and Biden’s budget builds on the electric vehicle and mass transit plans he proposed in his infrastructure package.

Biden aims to use federal procurement to jump-start the electric vehicle supply chain. Only about half a percent of the federal fleet is electric — 3,200 of 645,000 vehicles — according to General Services Administration data on fiscal 2019, the most recent available.

The budget proposes $600 million to purchase electric vehicles and charging stations for the federal government’s own fleet, with half dedicated to the GSA and half to other agencies.

Transit grants would get a 23% bump, reaching $2.5 billion. The budget also calls for $250 million to help transit agencies buy low- and no-emissions buses.

Amtrak would see a 35% increase to its budget, reaching $2.7 billion, and a further $625 million would be set aside for a new passenger rail grant program.

He’s proposed a framework of ensuring 40% of climate benefits reach disadvantaged communities. The budget identifies EPA as leading that initiative, with a proposed $936 million program called Accelerating Environmental and Economic Justice. That would include air quality monitoring and enforcement, along with non-climate programs such as Superfund cleanups.

The Justice Department would see a $5 million bump for its Environmental and Natural Resources Division to take on environmental justice cases, along with the $39 million boost for prisons.

It also calls for starting up climate and environmental justice research in new corners of the government. For instance, Biden is proposing to create an Office of Climate Change and Health Equity under the Department of Health and Human Services, aimed at decreasing climate impacts among vulnerable populations.

Coal towns and other fossil fuel-dependent communities also would get funding boosts, including a $50 million increase for the Assistance to Coal Communities program.

Biden’s budget would boost funding to harden communities and federal buildings against wildfires, floods and other climate-fueled hazards.

Tribes would see a $450 million increase in resiliency projects. Farmers could expect $161 million more in conservation and environmental services programs, as well as expanded programs to forecast drought and other climate impacts.

Base resiliency seems to be the main climate focus in Biden’s defense budget.

Other departments would see new funding to prepare for climate impacts. Not all of the focus is on physical infrastructure, either.

Health and social programs would direct more attention to climate’s impacts on health. The Centers for Disease Control and Prevention’s climate and health program, for instance, would see its funding jump to $110 million from $10 million.

Biden’s plan heavily invests in climate science across multiple agencies, with a plan to increase not just U.S. understanding of climate impacts, but also strategies for adaptation and mitigation. It offers a $4 billion research portfolio that expands climate science at NASA, NOAA, EPA, the Interior Department and the National Science Foundation.

NOAA would receive almost $7 billion in funding, including an additional $1.4 billion to expand its climate observation and forecasting work, and to provide better data and information to policymakers. It also would receive money for resilience programs that protect coastal communities from the economic and environmental effects of climate change.

"This increase includes $800 million to expand investments in climate research, support regional and local decision-making with climate data and tools, and improve community resilience to climate change," the document states.

NASA’s Earth science budget would receive a boost of $250 million, to $2.3 billion. That increase would be focused on improving the agency’s understanding of how the planet is responding to climate change, and it would support new research tools to understand how the planet is changing.

The money is intended to "initiate the next generation of Earth-observing satellites to study pressing climate science questions," the document states.

The National Science Foundation would receive $10.2 billion — a significant bump of $1.7 billion, or 20%, over current levels.

Included in that funding is $1.2 billion for climate- and clean energy-related research, a $500 million increase from current levels. The money would help study "climate science and clean energy, including research on atmospheric composition, water and carbon cycles, modeling climate systems, renewable energy technologies, materials sciences, and social, behavioral, and economic research on human responses to climate change," according to the White House.

A number of agencies would receive money for research on strategies to mitigate and adapt to climate change.

In the Interior Department, wildfire research would be boosted to $1.7 billion, an increase of $476 million over the 2021 enacted level, to study and mitigate the forces that drive worsening fire seasons.

Research would be conducted on forest management, droughts and ecosystems. The budget would devote an increase of $161 million to the Department of Agriculture to better incorporate science into conservation planning. In particular, it would focus on carbon sequestration, greenhouse gas reduction and wildlife stewardship.