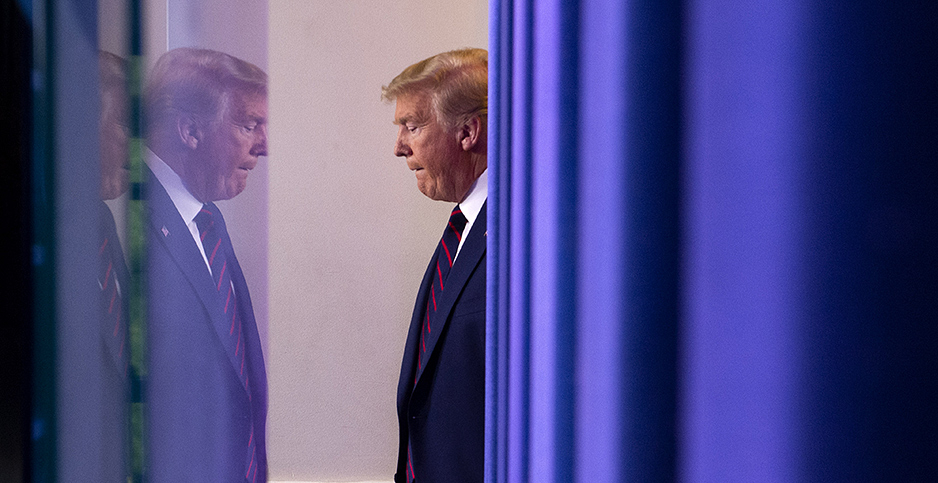 President Trump is overseeing one of the nation's most dramatic economic downturns. How he and other world leaders respond could have a large effect on greenhouse gas emissions. Kevin Dietsch/Picture Alliance/Consolidated/Newscom

Recessions are often accompanied by a drop in carbon dioxide emissions. Then comes the rebound.

In 2009, the Great Recession pushed global emissions down almost 1%. The next year CO2 levels rose by roughly 5%, as governments around the world enacted stimulus measures to prop up their economies.

The economic devastation wrought by the novel coronavirus is anything but typical. The United States reported 6.6 million new unemployment claims last week. Three weeks ago, the previous weekly record was 695,000 in 1982.

Such staggering figures have turned conventional wisdom on its head. America’s oil tycoons, for instance, have long taken comfort in the saying that the best cure for low oil prices is low oil prices. Cheap oil generally stimulates demand. But it’s unclear when Americans will begin driving again, no matter how low prices at the pump plunge.

Uncertainty over the shape of this economic recovery makes it difficult to project future emissions.

"I wish I knew. There is nothing we can say intelligently," Gernot Wagner, a climate economist at New York University, said in a phone interview.

Predicting the trajectory of global emissions might be folly at this stage of the coronavirus pandemic, but economists know this much: Emissions historically rise as the economy does.

Here are five economic developments that are likely to determine the world’s emissions trajectory in the coming years.

As goes China, so goes the world?

China’s emissions plunged after Beijing put much of the country on lockdown to slow the spread of the coronavirus.

Lauri Myllyvirta, an analyst at the Centre for Research on Energy and Clean Air, reported the lockdown reduced emissions 250 million tons — roughly the annual emissions of Florida.

Even if China escapes a second wave of the coronavirus, its factories could continue to be stung as the virus ravages economies around the world. Moody’s Investors Service estimates gross domestic product in the U.S. and eurozone will contract this year by 2% and 2.2%, respectively. The ratings service estimates growth in China will slow to 3.3%, down from its initial 2020 projection of 6.1%.

Beijing has already signaled it intends to intervene to help prop up the economy. Steel inventories are already bulging, according to Myllyvirta, an apparent bet by manufacturers that the central government will support a large construction boom.

That raises questions about the climate impacts of China’s recovery. A burst of construction would not only boost carbon-intensive industries like steel and cement, but could also lock in emissions from vehicles and buildings for years to come, said John Larsen, an analyst at the Rhodium Group, a research firm.

"I think the biggest question is how deep of an economic hit is the virus going to generate in major economies and when," he said. "That is going to be a big part of what determines the pace and magnitude of the rebound in emissions."

When will Americans get back in their cars? If ever?

Transportation is America’s largest source of greenhouse gases, accounting for 35.8% of the country’s total emissions in 2018. Almost 60% of that came from passenger vehicles and light-duty trucks.

Now many of those vehicles are parked at home.

The impact of that shift is already becoming evident in energy markets. On Wednesday, the U.S. Energy Information Administration reported gasoline supplied to the domestic market fell by 2.2 million barrels a day last week — the largest weekly decline since the agency began keeping records in 1991.

Gasoline prices are falling even faster than the price of crude oil as demand evaporates and storage capacity dwindles.

Normally, Americans would take to the roads or the air when oil prices fall. Today, it’s unclear when lockdowns in large parts of the country will be lifted or whether people will be willing to travel when they are.

"People won’t get in their cars now regardless of the gasoline prices," said Daniel Cohan, a professor of civil and environmental engineering at Rice University.

"One big thing to look for is how sticky are these changes in behavior?" Cohan added. "As more of us get used to working from home, teaching from home, having conferences and meetings remotely, how much does that reduce airplane travel or booking a vacation?"

Where do oil prices go from here?

Oil prices rallied last week after President Trump tweeted that Saudi Arabia and Russia had agreed to curtail production and ease the glut of new crude coming onto the market. A statement from Riyadh immediately cast doubt on that claim, however.

The outcome of the price war will reverberate beyond the oil sector. Take American utilities. In recent years, a flood of natural gas from oil wells has severely depressed gas prices and driven down the use of coal. But a rise in gas prices could lead to a short-term increase in coal generation, as utilities that have switched to gas in recent years ramp up their use of coal, Cohan said.

Rising gas prices look increasingly likely. S&P Global Platts Analytics said prices at the Henry Hub could rise from multidecade lows, at about $1.60 per million British thermal units today, to $3 per MMBtu next year as production is curbed.

"2021 is shaping up to be a bullish year for Henry Hub prices," the ratings service wrote in a recent report. "If crude oil continues to languish in the $20-30/barrel range, associated gas declines will begin to take hold later this year and into 2021."

The price of oil will almost certainly play a factor in any transition toward new technologies, one way or another.

At the same time, a prolonged drop in oil prices might make consumers reluctant to embrace electric vehicles, said Jason Bordoff, director of the Center on Global Energy Policy at Columbia University.

"One indicator over the next year will be whether automakers extend time frames for shifting fleets," he said.

Emissions from the United States and Europe have declined in recent years, only to be offset by emissions gains in Asia. The dynamic has led to talk of "production" and "consumption" emissions.

The U.S., for instance, might be producing less CO2 than it once did, but that doesn’t account for the emissions associated with the production of imported goods that Americans buy.

The coronavirus has exposed shortcomings in global supply chains, particularly in medical supplies. And coming on the heels of the U.S.-China trade war, it might prompt some countries to repatriate manufacturing previously outsourced to Asia.

What that might mean for emissions is unclear. Less shipping could reduce emissions. But it’s difficult to determine whether shifting factories from Asia to the West would actually cut manufacturing emissions, said Wagner, the NYU professor.

Other changes in global supply chains could hinder efforts to green the energy system, he said.

"I can easily see a real dent especially for infant industries like renewables," Wagner said. "Renewable supply chains frequently depend on things working just so, with everything depending on one factory in China."

What’s in the fourth coronavirus bill?

Energy has so far been a bit player in congressional recovery efforts, though not for a lack of trying. Democrats have talked up their clean energy priorities, while Trump has championed the idea of filling the Strategic Petroleum Reserve. Neither has been included in Congress’ initial rescue packages.

Nearly all observers said they expected Congress to take another bite at the rescue effort. The question is whether it would include energy components — and which ones would be involved.

"In principle, revitalizing the economy and pursuing clean energy can be very compatible," said Cohan, the Rice professor. But, he added, "it will take the right leadership and visionaries to make that happen."