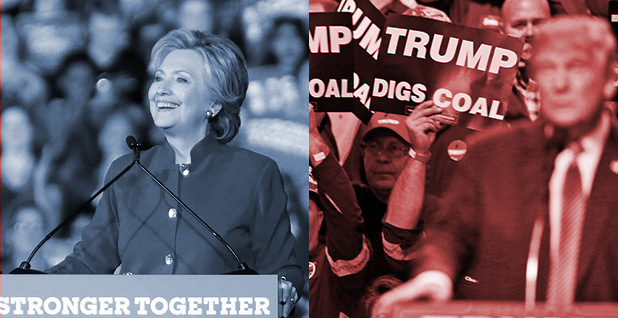 Voters have a stark choice on energy and climate change when they go to the polls tomorrow. Left photo by Gage Skidmore via Flickr; right photo courtesy of AP Images.

The focus on bigotry and email secrecy in the presidential race is eclipsing distinct differences in the candidates’ views on energy and climate change, two intertwined issues that affect everyone from families and the military to manufacturers and farmers.

On one hand, Republican Donald Trump is promising to alter the nation’s course on greenhouse gas emissions by withdrawing from the global Paris Agreement and terminating the Clean Power Plan, which requires the electricity sector to cut emissions 32 percent in 13 years.

On the other, Democrat Hillary Clinton promises to exceed President Obama’s commitment to cut carbon dioxide levels by up to 28 percent from 2005 levels by 2025. The former secretary of State supports an ambitious acceleration of renewable energy, for which funding is likely dependent on an acrimonious Republican Congress.

Clinton almost always tells her crowds that climate change is "real." That might seem overly obvious to Washington wonks and too modest for professional environmentalists. But there’s a reason for it. It’s simple and safe. Voters like the idea of tackling global warming more than the plans to actually do it.

"This is happening, this is a problem, and I see the federal government’s role in addressing it," is how Jon Krosnick, a political science professor at Stanford University, describes a likable message.

He’s rejected the science and even cussed it out. That might be attractive to his ardent supporters, but some Republican strategists worry that it puts a target on the Republican Party.

"So Obama’s talking about all of this with the global warming and the — a lot of it’s a hoax, it’s a hoax," Trump said at a rally in December. "I mean, it’s a moneymaking industry, OK? It’s a hoax, a lot of it."

Sure enough, Clinton and her team constantly hit Trump for being a "denier." That can expose the candidate, and his party, to more harmful interpretations about his grasp on science. Vice President Joe Biden said last week that the GOP doesn’t believe in gravity.

Trump has other concerns about science. He told a crowd in South Carolina that the Earth’s ozone layer isn’t threatened by aerosols — as long as you’re inside when you use hair spray.

"But it’s sealed, it’s beautiful," Trump said of his New York City apartment. "I don’t think anything gets out. And I’m not supposed to be using hair spray. But think of it."

Clinton is staking her climate credentials on clean energy.

She passed on bigger and more efficient policies, like a carbon tax, and settled on an aggressive renewable goal of installing a half-billion solar panels within 10 years. She also promises to boost renewable energy generation tenfold on public lands and waters.

Altogether, the campaign says, renewables will provide 33 percent of the nation’s electricity by 2027. That’s enough to power every home. The United States is already on track to make about 25 percent of its power from clean sources by that time, if the Clean Power Plan survives legal challenges.

The pathway to Clinton’s goal is treacherous. She depends on a $60 billion Clean Energy Challenge to reward states for exceeding their requirements under the Clean Power Plan. That relies on two things: funding from an inhospitable Congress and the survival of the Clean Power Plan.

Andrew Wheeler, a Republican energy strategist, says the plan is high on aspiration and low on details.

"It’s more of a sound bite than a policy," he said.

Trump, meanwhile, calls himself an environmentalist who supports an "everything" energy strategy. But he has repeatedly called solar and wind too expensive, unsightly and damaging to birds (ClimateWire, Oct. 27).

He added: "And it kills all the birds. I don’t know if you know that. … Thousands of birds are lying on the ground. And the eagle. You know, certain parts of California — they’ve killed so many eagles. You know, they put you in jail if you kill an eagle. And yet these windmills [kill] them by the hundreds."

Renewable advocates disagree with Trump on price. They say cost trends of wind and solar are improving. On birds, Trump hits a nerve. Some conservationists flinch at the idea of a feathered friend being hit by a massive turbine blade. And thousands do die every year. But he exaggerates his point about eagles.

Trump seemed eager to use this against Clinton, but he rolled it out just once.

The business tycoon accused his opponent of supporting "a price on carbon," pointing to a section in the Democratic platform that was included to appease supporters of Sen. Bernie Sanders (I-Vt.) (ClimateWire, Sept. 23).

"That’s just political-speak for a massive new tax on coal and shale production, a tax on American consumers, and very unfair to our country," Trump said recently in Pittsburgh.

Turns out Trump wasn’t that far off.

Clinton supported a cap-and-trade program when seeking the Democratic nomination in 2008, and hacked emails released by WikiLeaks suggest she considered campaigning on a greenhouse gas "fee" this time around.

That would have cut deeper into the nation’s emissions, made her stand out against Obama’s looming climate profile, and attracted withering attacks from Republicans. In the end, she went with an easier, and more modest, approach based on renewable energy.

John Podesta, her campaign chairman, summed up his team’s polling on a carbon tax by saying it "sucks."

Clinton’s tempered climate platform attracted criticism from her liberal base in the primary. But Paul Bledsoe, who worked on climate issues under President Bill Clinton, says it was the right choice.

"There’s no point in advocating a politically risky policy that has no chance of being enacted once you become president," he said. "It doesn’t make any sense. You end up painting a target on the back of a policy."

This took center stage when Hurricane Matthew crashed into the southeastern United States six weeks ago.

Clinton joined Al Gore, her husband’s vice president, on a stage in Miami on Oct. 11 to drive climate change onto the news cycle. Their target was millennials, who account for 26 percent of Florida’s registered voters.

"Now, some will say, ‘You know, we’ve always had hurricanes. They’ve always been destructive,’" Clinton said. "And that’s true. But Hurricane Matthew was likely more destructive because of climate change."

But there’s always the risk of overemphasizing the role humans have on specific disasters. She and Gore both did that when they pointed to warmer ocean temperatures as a man-made influence on Matthew.

Scientists said it was actually caused by El Niño.

Trump hasn’t talked openly about adaptation. But he might have referred to it coincidentally.

Recently, he has talked about canceling U.S. funding for the United Nations and applying it to build roads and invest in the Everglades. He seems to be referring to the United Nations’ Green Climate Fund, which is a massive global adaptation program. Nations aspire to put 100 billion public and private dollars into that annually, but so far, the United States has provided about $500 million.

Even some Republican policy wonks say Trump has exaggerated the U.S. commitment to the fund.

Still, Trump signaled support for protecting some environmentally rich places. That could have some adaptive features.

This is Trump’s rallying call.

Throughout his campaign, he’s promised to reopen shuttered coal mines in hard-hit places like West Virginia, Pennsylvania and Ohio. Never mind that it’s not going to happen. It crystallized his persona as a get-‘er-done candidate and gave hope to financially suffering voters (ClimateWire, May 10).

And it came at just the right time: at the opening of the general election race, when he was desperately in need of unifying momentum.

Trump also got some help from Clinton.

At a CNN town hall event in March, Clinton was explaining how she would put $30 billion into transition programs for people in the coal industry. The plan calls for investments in education and training, health services and housing, and carbon capture and sequestration.

Instead, she provided her opponents with one of the most harmful sound bites in the course of the election.

"I’m the only candidate which has a policy about how to bring economic opportunity — using clean, renewable energy as the key — into coal country, because we’re going to put a lot of coal miners and coal companies out of business, right?" Clinton said.

For a time, Trump repeated it as often as his promise to build a wall.

To some, it encapsulates the race’s focus on optics over policy.