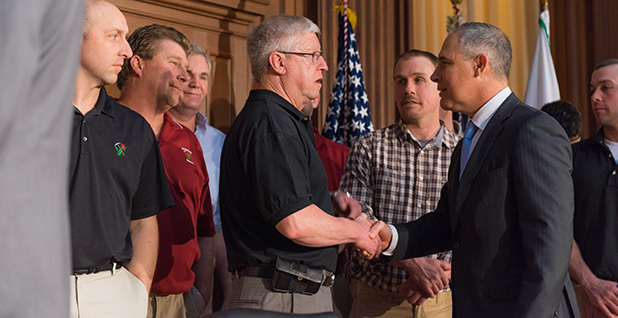 In late April, the Trump administration assembled top officials on both sides of the feud over whether to exit the Paris climate agreement.

It’s been known that heavy hitters on Trump’s team had met to hash out whether to quit the climate deal, but new details have emerged from Pruitt’s formal schedule. The calendar — made public yesterday by the liberal watchdog group American Oversight — offers a behind-the-scenes look at the administration’s early moves on climate change. It gives insight about who weighed into big decisions like Paris, offers a glimpse of who’s talking to Pruitt about climate change rules, and reveals members of the administrator’s inner circle.

Here’s a look at some of the big meetings on climate change that Pruitt has had since taking office:

On April 27, the White House National Economic Council sent out an invitation rescheduling a "principals meeting on the Paris Agreement," according to Pruitt’s schedule.

On one side of the question were policy experts like Cohn and Banks, who cautioned that a departure from the globally popular deal could complicate Trump’s efforts on trade and security issues. They appeared to have been supported by chief adviser and Trump son-in-law Kushner along with Tillerson.

In the other corner were campaign die-hards like chief strategist Bannon and Pruitt — who helped push the president to exit (Climatewire, April 18).

Ahead of the April gathering, Pruitt and his staff huddled for a "Paris meeting prep," according to his calendar.

The hourlong meeting scheduled in Pruitt’s office identifies which staffers Pruitt is relying on for climate policy advice.

Pruitt discussed Paris again with Jackson and Dravis on May 16, according to his schedule. That meeting was titled "Prep for White House Paris meeting."

On March 17, Pruitt had lunch with Trump’s senior policy adviser, Miller, according to his schedule.

Pruitt later met with White House aide Catanzaro for lunch on April 7, along with Dravis and Gunasekara.

Thanks for rolling back the Clean Power Plan

Pruitt met with representatives from the North Dakota Farm Bureau and the North Dakota Association of Rural Electric Cooperatives on April 25 to discuss rule rollbacks, according to his schedule.

The purpose of the meeting was for the industries to "thank" Pruitt for "his rollback of all of the harmful regulations these last eight years," including the Clean Power Plan, the social cost of carbon and other Obama-era climate policies.

Among those at the meeting were Rep. Kevin Cramer (R-N.D.) and state industry representatives.

On May 18, Pruitt participated in a conference call with state-based groups including think tanks, legislators and energy executives to talk about changes to EPA’s policies.

"Many people on this call were leading the Clean Power Plan push-back in their state and are advocates for devolving decision making to the local level," according to Pruitt’s calendar.

On April 6, Pruitt sat down with William Wehrum, a former EPA official under George W. Bush.

Wehrum was nominated to lead EPA’s air office in September. If confirmed, Wehrum will play a key role in helping the Trump administration roll back Obama-era climate and air policies, including the Clean Power Plan.

On May 2, Pruitt met with Matt Leopold, who was nominated in September to be EPA’s general counsel.

They discussed the idea of launching a so-called red team aimed at poking holes in mainstream climate science, Pruitt told Reuters in a July interview.

"Steve and I were meeting about some other things, and we didn’t really focus on that, but I took the opportunity to talk to him about it," Pruitt told Reuters.

Koonin, who is rumored to be in the running to lead such an operation for the Trump team, told E&E News in August that he had discussed the idea with administration officials but declined to comment on whether he was in talks about running the exercise. He said he’d consider it if certain conditions were met (Climatewire, Aug. 7).