6 energy and enviro bills in line for infrastructure package 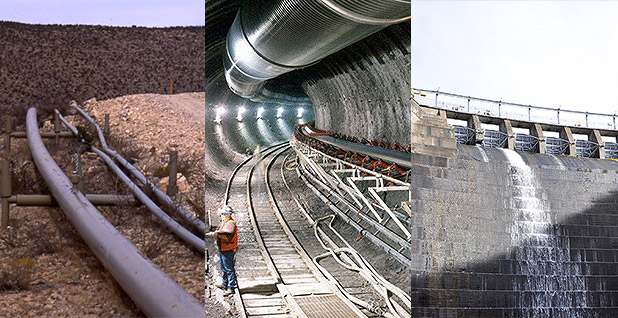 Many of the energy and environmental changes being pushed for a high-priority infrastructure deal sought by the White House and Republicans are already working their way through Congress.

House Energy and Commerce Chairman Greg Walden (R-Ore.) has pointed to two dozen bills backed by his committee as potential candidates for inclusion of the infrastructure measure.

Those run the gamut from contentious nuclear waste legislation and regulatory rollbacks to more bipartisan bills that offer grants for rebuilding water systems and cleaning up former industrial sites.

Lawmakers have yet to settle on a strategy or timeline for moving the infrastructure bills, with many increasingly doubtful about the prospects in an election year.

Speaker Paul Ryan (R-Wis.) said last week to expect the House to move five or six bills, including on water infrastructure and regulatory reforms, rather than the single, massive package touted by the White House.

And the Senate has offered even fewer clues beyond some suggestions that energy reform legislation could be part of a broad deal.

"The clock’s ticking, we all know that," said Rep. Fred Upton (R-Mich.), a senior E&C member, who said "hope so" when asked last week if infrastructure legislation could move ahead of this fall’s election.

Here’s a look at six bills with potentially major impacts for the energy industry and environmental community that are being at least talked about as part of an infrastructure overhaul.

Status: Passed the full House, 408-9, in July. Awaiting action in the Senate.

Legislation to extend and revamp U.S. EPA’s brownfields program is, perhaps, the most consequential bipartisan environmental bill to pass the House this Congress.

Republican lawmakers have argued it should be counted as an infrastructure bill because it would lead to billions of dollars in new infrastructure spending at some of the 450,000 sites across the country.

It also fits in well with the GOP call for regulatory streamlining by creating a new brownfields grant program to encourage cooperation between federal and state governments on cleanup work.

EPA Administrator Scott Pruitt, too, could get behind the measure, which would fit with his priority of cleaning up toxic waste sites nationwide.

A Senate brownfields bill, S. 822, won bipartisan backing by the Environment and Public Works Committee last summer. There are some differences over funding levels, but both proposals have the same goal of expanding and accelerating site cleanups.

Status: Passed the House Energy and Commerce Committee in June. Awaiting action in the Senate.

Backers of a nuclear waste repository at Yucca Mountain, Nev., believe legislation authorizing the project amounts to a multibillion-dollar investment in infrastructure.

The bill, approved 49-4 in committee, would spend $260 million over a decade for interim nuclear waste storage and to begin constructing the permanent site in the Nevada desert. The final cost of building Yucca could come in at nearly $100 billion.

The full House has yet to take up the measure as lawmakers have been unable to settle on funding. A Nuclear Waste Fund, supported by ratepayers to pay for the site, has not collected money since 2014.

The politics are even trickier in the Senate, where Republican Dean Heller of Nevada has vowed to block any progress on Yucca — a project unpopular in the Silver State.

Heller faces a highly competitive re-election this year, and GOP leaders would be reluctant to jeopardize it by pushing Yucca.

Status: Passed the House Energy and Commerce Committee in July. Awaiting action in the Senate.

A House bill to provide billions of dollars for rebuilding and repairing crumbling drinking water in the wake of the lead poisoning in Flint, Mich., could find bipartisan support for being included in an infrastructure package.

The bill, approved in committee by voice vote, would reauthorize the Drinking Water State Revolving Fund for five years and allow it pay out grants up to $8 billion for communities across the nation.

It would be a boost of about $1.2 billion over current federal spending on the popular grant program with carve-outs to make it easier for dollars to go to disadvantaged communities like Flint.

The White House and congressional Republicans have both repeatedly said overhauling drinking water systems would be a major element of their infrastructure legislation.

A Senate version of the bill, however, has yet to surface.

Legislation from Flores and a team of GOP co-sponsors could serve as a model for the broad permitting goals the Trump administration has laid out in its infrastructure plan.

It would underscore the Federal Energy Regulatory Commission’s role as the lead permitting agency for pipeline projects and allow FERC to impose deadlines on federal and state regulators.

A variety of natural gas industry groups pushed for the measure as it wound through the House, and Republicans sold it as a way to better coordinate the environmental review process for pipelines.

The legislation is also one example of what the Trump administration’s "one agency, one decision" permitting framework could look like as legislative language.

The bill avoids some proposals in Trump’s plan that have been unpopular in the past. For example, it would not include a specific two-year limit for reviews under the National Environmental Policy Act or require any extensive rewrites of environmental law.

Still, many Democrats and environmentalists are generally united against it. They say it would be duplicative and unnecessary.

Status: Passed the full House, 257-166, in November. Awaiting action in the Senate.

Legislation streamlining the federal process for hydropower permitting fits with the GOP view that less regulation will spur infrastructure projects.

H.R. 3043, much like H.R. 2910, would give FERC more control over the permitting process. The bill would designate FERC as the federal lead for processing applications for hydropower.

The arguments for and against the measure are similar, too. Republicans say that it would bring "certainty" to permitting. Environmentalists and tribal groups say it could undercut state authority under the Clean Water Act and hand the reins to FERC in an area where it has no real expertise.

H.R. 3043 made it out of the Energy and Commerce Committee by voice vote, but the panel’s top Democrats came out against it just before it hit the full House (E&E Daily, Nov. 7, 2017).

And some moderate Democrats think the party only hurts itself by refusing to compromise on permitting reform for hydropower and other carbon-free energy projects.

"What we’re concerned about is achieving high standards, and if there’s a way to achieve high standards with less drag on the economy, we ought to welcome that, not fight it," Rep. Scott Peters (D-Calif.) said in a recent interview. "The frustration that people feel can lead to what Trump wants to do, which is to get rid of all regulations."

Peters has his own hydropower permit streamlining bill, H.R. 2274. The measure passed the House under fast-track procedure in June.

FERC and the Department of Energy would get more muscle on pipeline and energy transmission under a plan to nix the president’s ability to unilaterally block certain projects.

The bill would transfer permitting authority for cross-border energy infrastructure from the State Department to FERC for pipelines and to the Department of Energy for transmission projects.

It would do away with the presidential permitting requirement former President Obama used to reject the Keystone XL pipeline and that Trump later used to reverse that decision.

The bill mirrors language inserted in the House version of the proposed energy reform package that stalled in late 2016, and it’s one of two pipeline infrastructure bills that the Energy and Commerce Committee has taken up in this session.

But much like the other piece of pipeline legislation, H.R. 2910, it has little chance of passing the Senate this year.

If House Republicans and moderate Democrats — like its co-sponsor, Rep. Gene Green of Texas — want to get it into law, they’ll likely look to attach it to an infrastructure package.