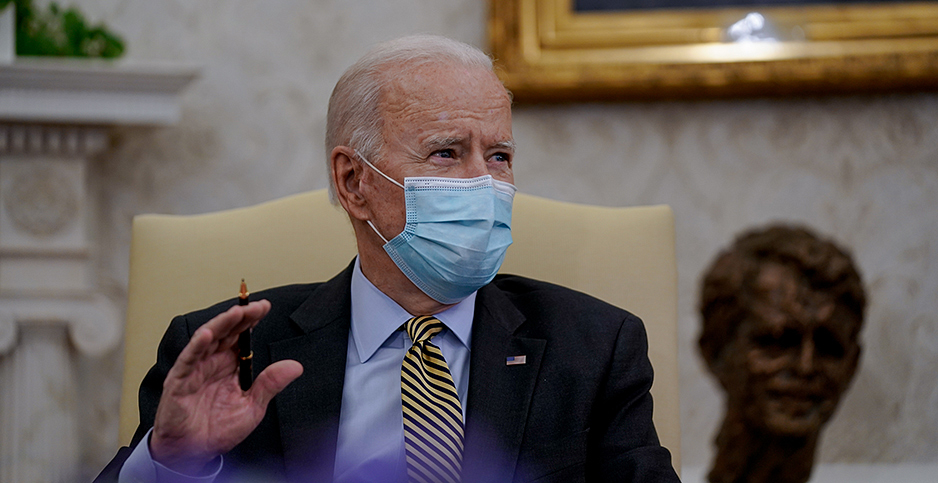 President Biden at the Oval Office on Friday. Sipa USA/Newscom

President Biden offered a first glimpse last week into his fiscal 2022 budget, outlining a $1.5 trillion plan for discretionary spending that would boost many energy and environmental programs.

Biden, during remarks to reporters Friday, said the budget "makes major investments in the fight against climate change."

While the proposal contains top-line spending figures and highlights a host of major domestic initiatives, it also leaves out many details — ranging from specific program costs to tax and revenue plans.

Those details will come later this spring when the administration sends its comprehensive budget to Capitol Hill.

As Congress, agencies and other interests await the full spending blueprint, E&E News answers some of the questions being raised about Biden’s plan to hike discretionary spending across agencies by more than 8%.

What will EPA do with its big increase?

Few agencies have seen their fortunes turn like EPA. The agency that former President Trump repeatedly sought to slash would see an increase of $2 billion to $11.2 billion in fiscal 2022.

The 21% increase is one of the largest for any agency and seeks to reverse an estimated 27% decline in spending since fiscal 2010, if figures are adjusted for inflation.

Biden would direct almost half of the hike, $936 million, toward a new Accelerating Environmental and Economic Justice initiative at EPA.

It’s part of a larger commitment the administration has made to invest $1.4 billion across the government to aid communities disproportionally affected by climate change and pollution.

Another focus is EPA’s workforce, which saw more than 1,000 workers leave under Trump. Biden plans to rebuild it, in part with $110 million proposed for "critical staff capacity" to protect air, land and water.

How will Congress respond?

Lawmakers could push spending even higher as this year marks the first time in a decade they will not have to abide by stringent spending caps.

Senate Republican leaders, including GOP leader Mitch McConnell of Kentucky and top appropriator Sen. Richard Shelby of Alabama, released a statement Friday warning that the budget provides only a 1.6% increase for the Defense Department.

"We can’t afford to fail in our constitutional responsibility to provide for the common defense. To keep America strong, we must balance domestic and defense spending priorities. President Biden has said much about reaching across the aisle. … We urge President Biden to work with us in a bipartisan manner to ensure that," the statement said.

Notably, the GOP leaders did not call for scaling back Biden’s domestic priorities, a sign they could be open to trading an increase at the Pentagon for more spending at home.

But if Biden were to seek a deal — and he stressed Friday he wants bipartisan support for his budget — he would face fierce resistance from progressives in his own party who say deep cuts are overdue at the Pentagon.

Senate Budget Chair Bernie Sanders (I-Vt.) said last week he favored the domestic increases but added, "It is time for us to take a serious look at the massive cost overruns, the waste and fraud that currently exists at the Pentagon."

Another wild card in crafting any spending accord is the reemergence of earmarks for the first time since 2011, which will allow lawmakers to direct spending for specific programs.

While there will be new limits and safeguards on earmarks, their presence could help build bipartisan support for bills from lawmakers eager to show they can deliver for constituents.

Is there any funding for Biden’s infrastructure plan?

No — but the budget document says it "sets the stage" for the massive $2.2 trillion infrastructure plan that the White House proposed earlier this month.

A chunk of fiscal 2022 infrastructure money would come in proposed spending for the Transportation Department, which would see its discretionary accounts increase by $3.2 billion, or 14%.

Specifically, the budget request outlines plans for a "second great rail revolution," with $625 million for new passenger rail grants, $375 million for rail safety and infrastructure grants, and $2.7 billion (a 35% increase) for Amtrak improvements and route expansion.

The spending would be a precursor to the $85 billion Biden wants to invest in public transit over the next decade.

More details on infrastructure spending will be fleshed out as soon as next month when Congress begins working on a reauthorization of surface transportation programs.

How did clean energy programs fare?

With the Biden White House calling for the United States to become a clean energy "superpower," the budget request seeks billions of dollars in new spending for research, development and deployment of clean energy technologies.

Clean energy R&D at the Energy Department would rise above $8 billion, a 27% increase from fiscal 2021. That includes spending related to advanced nuclear, carbon capture, battery storage and renewables.

Trump repeatedly sought to shut down APRA-E, but Congress has resisted those efforts and is likely to back the expansion.

Biden also proposes $1.9 billion for a Building Clean Energy Projects and Workforce Initiative, which combines a focus on jobs, infrastructure and transmission permitting. Part of the effort would be challenge grants to state, local and tribal governments for clean energy deployment.

How does the request address Biden’s conservation and energy leasing plans?

The White House offers its most definitive guidance yet on its 30×30 conservation efforts and, perhaps, some hints about the future of federal energy leasing programs in the budget.

According to the request, the Interior Department would receive $200 million for "science based" conservation toward meeting its goal of preserving 30% of U.S. lands and water by 2030.

The plan notes, for the first time, that the 30×30 effort would require private lands to meet its goal and it would offer "incentives that support the stewardship efforts of farmers, ranchers and other private landowners." Interior is set to outline its full 30×30 plan in a report due at the end of the month.

Biden’s request does not say whether the administration will continue its controversial move to pause all energy leasing on federal lands. A final decision is not expected until summer.

However, the budget shows Biden wants to help communities to transition away from fossil fuels.

The request more than triples funding for cleaning up abandoned mines and wells to $550 million. It would also boast funding for coal country assistance, including a $100 million multiagency effort to train displaced workers in Appalachia.

How will Biden pay for his spending plan?

It’s not yet clear. The proposal makes no mention of taxes, nor does it offer projections on deficit spending. Those details will come in the broader budget presentation.

Biden has called for ending fossil fuel tax breaks and raising the corporate tax rate to cover the cost of his infrastructure plan.

He also wants to use the tax code to extend clean energy investment incentives. Additionally, he has backed reviving the 48C manufacturing clean energy credit from the 2009 economic stimulus that has expired.

Some of those proposals could be outlined in the budget, although with multiple green energy tax plans floating around Capitol Hill, any final tax legislation or provisions could change substantially in the coming months.

It seems unlikely that any of those tax proposals could pass Congress soon enough to provide revenues for the fiscal 2022 spending bills.

If the White House instead proposed deficit spending in advance of a tax code rewrite, expect conservatives to raise concerns over the exploding federal debt — which has risen by trillions of dollars over the past year because of emergency pandemic relief aid spending.

It could spark a fierce fight this summer over fiscal policy when Congress will need to raise the federal debt ceiling to cover the cost of new deficit spending or risk a government default.