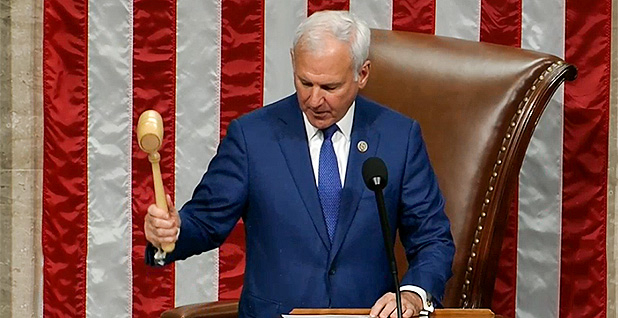 The House today approved a nonbinding resolution against a carbon tax. C-SPAN

A resolution declaring carbon taxes to be "detrimental" to the U.S. economy sailed through the Republican-controlled House this morning with the support of most — but not all — of its GOP members.

The 229-180 vote was the second time since 2016 the House has made official its displeasure with levies on carbon emissions, though neither measure has any actual impact on federal policy.

Notable, however, is that unlike the 2016 vote — which had unanimous Republican support — this one had six GOP defections.

Among them was Rep. Carlos Curbelo (R-Fla.), who is expected next week to release his own carbon tax legislation.

His bill — which would do more than simply express a "sense of Congress," as the carbon tax resolution does — would eliminate the federal gas tax, pause climate change regulations and impose a $23-per-ton levy on emissions from energy industry facilities.

Joining Curbelo in opposition to the Scalise resolution was another Florida Republican: Rep. Ileana Ros-Lehtinen.

She said after the vote that her opinion changed on carbon taxes after she joined the bipartisan Climate Solutions Caucus, of which Curbelo is a co-founder.

"It doesn’t mean I’m ready to embrace Curbelo’s bill on actually having this carbon tax, but I’m saying that let’s not shut the door totally," she said. "Let’s think about it, [and] let’s see what plans are around."

The four other Republicans who opposed the resolution were Reps. Brian Fitzpatrick of Pennsylvania, Trey Hollingsworth of Indiana, Mia Love of Utah and Francis Rooney of Florida.

In spite of the resolution’s symbolic nature, several environmental groups and experts have been tracking the vote.

"The effects of a carbon tax on the US economy, energy system [and] environment are matters best left to careful empirical analysis, not congressional resolutions without supporting evidence," said Noah Kaufman, director of the Carbon Tax Research Initiative at the Columbia University’s Center on Global Energy Policy, in a statement. "We are eager to work with any House member interested in learning more."

While most of the six Republicans who opposed the resolution are part of the Climate Solutions Caucus, the majority of GOP lawmakers in the bipartisan group supported it.

That includes Rep. Darrell Issa (R-Calif.). "Taxation is not the solution," Issa said.

Democrats, too, were not united. Seven of them supported the Scalise resolution, one more than backed the 2016 measure. They included moderates Henry Cuellar of Texas and Kyrsten Sinema of Arizona.