6 takeaways as Trump moves toward replacement 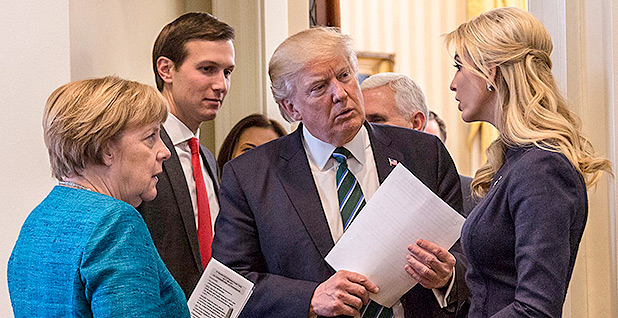 After spending most of its first year tearing down climate rules, the Trump administration is now taking steps to write its own.

U.S. EPA Administrator Scott Pruitt yesterday asked for wide-ranging comment about how to replace the Obama administration’s signature climate change rule, the Clean Power Plan. In the lengthy document known as an advance notice of proposed rulemaking (ANPR), the administration offered important clues about the way forward, claimed that the Obama rule was illegal and gave critics fodder for counterattacks.

"This notice is a lot more substantive than a lot of us expected," said Jeff Holmstead, an industry attorney who served as EPA’s top air official during the George W. Bush administration. "The expectation was the EPA was going to do a short ANPR and say, ‘Send us your ideas,’" he added. But the level of detail in the 44-page document "suggests they’re serious about coming up with a replacement rule."

If the administration finalizes a replacement rule, as it’s signaling it will do, President Trump would be the first chief executive to regulate greenhouse gas emissions at power plants.

Obama’s Clean Power Plan was halted by the Supreme Court last year, well before states would have been required to write plans to comply with it and years before reductions were mandated.

Trump — who has previously called global warming a "hoax" — may not want the distinction of regulating carbon, but he could get it as early as next year if EPA finalizes a replacement rule. The administration said last week that it plans to issue a draft replacement rule by June.

That may be the inevitable outcome as Trump and his team try to walk a fine line between showing the courts that they’re meeting its Clean Air Act obligations, appeasing conservatives who want to see climate rules torn down and satisfying industry constituents who say having a rule would give them certainty (Climatewire, Sept. 27).

The notice doesn’t ask for comment on repealing the endangerment finding, the scientific determination that underpins EPA’s climate rules.

In a footnote, EPA says that nothing in the document "should be construed as addressing or modifying the prior findings made under titles I and II of the [Clean Air Act] … with respect to endangerment and the requirements under 111."

Some conservatives are pushing for EPA to repeal the endangerment finding, arguing that future administrations will be able to reconstruct EPA climate rules more easily if that finding isn’t unraveled.

But other conservatives and industry representatives caution against that approach, arguing that it’s a losing legal battle.

"I think the Trump folks at EPA have decided that they want to focus on regulatory reforms that will be durable," Holmstead said. "By doing a substantive, meaningful replacement rule, they can provide long-term certainty for the industry and also make it clear what EPA can and cannot do under the Clean Air Act. … If the Trump folks tried to reverse the endangerment finding, this wouldn’t be durable. It probably wouldn’t stand up in court, and it would be easy for a future administration to put the endangerment finding back in place again."

North Carolina as a model?

EPA pointed to North Carolina as a state whose draft rule to comply with the Clean Power Plan might offer a "useful example" to limit emissions.

North Carolina’s draft plan was an "inside the fence line" approach that focused on power plants making efficiency improvements for coal plants (Energywire, Nov. 5, 2015). The state’s plan included a list of highly specific technical fixes like "air heater leakage reduction" and "intelligent soot blowing." The effectiveness of those fixes would be measured based on the manufacturers’ "performance acceptance test procedures."

Under the Obama administration, the state raised strong objections to the Clean Power Plan’s legality. North Carolina was among two dozen states that challenged the rule in a federal lawsuit that’s been stalled as the Trump administration decides how to proceed.

David Doniger, director of the Natural Resources Defense Council’s climate and clean air program, said that the state’s draft rule, developed under former Republican Gov. Pat McCrory, "was deliberately designed to let states decide to require no carbon reductions. It makes a mockery of the Clean Air Act and of cooperative federalism."

Holmstead said North Carolina’s "approach is certainly one option that EPA could adopt. It’s interesting because N.C. essentially did a unit-by-unit evaluation of potential energy efficiency upgrades and then decided which ones would be cost-effective for each unit. There are pro and cons to this approach, and it will be interesting to see what states and power companies have to say about it."

He added, "I wouldn’t say it’s necessarily EPA’s preferred option at this point."

The notice also opens the door for changes to a program that requires new permitting at power plants that have undergone significant upgrades and modifications that would lead to increased emissions of a regulated pollutant.

Known as "New Source Review," the program has been a political football between parties over the years. EPA in its notice signaled it would field questions on whether New Source Review would conflict with an inside-the-fence rule.

According to its detractors, the logic for changing New Source Review is that it deters power plant operators from making energy efficiency upgrades because they fear it would compel a round of costly permitting.

That’s because under Obama, the Clean Power Plan suggested that efficiency upgrades would cause a power plant to run more frequently — and therefore emit more pollutants that compel New Source Review permitting, Holmstead said. Improved efficiency would have lowered operational costs, in turn moving those units to the front of the electricity dispatch line under the Obama system, he said.

"Even the Obama folks knew this was an issue, so it’s something I think they’re going to have to deal with," said Holmstead.

But supporters of the current New Source Review program say it’s a crucial check on pollution from power plants. Changing the program is therefore likely to draw lawsuits, Jody Freeman, a former Obama climate adviser, said in a recent interview.

"That’s been a moving target, and we always expect a Republican administration to give the old coal plants more room," said Freeman, who is now a professor at Harvard Law School. "Then it becomes a legal battle … that gets into the trench warfare that’s always been true of New Source Review."

The U.S. Court of Appeals for the District of Columbia Circuit in 2006 struck down a George W. Bush EPA rule that tried to carve out exceptions to New Source Review for certain upgrades at power plants. But, as the law firm Marten Law wrote in its March 2006 summary of the case: "[O]ne thing is clear: controversy over interpretations of the [New Source Review] rules will continue."

Holmstead, who oversaw the implementation of those court-rejected policies, said the Pruitt-led EPA could try to initiate a wholesale shake-up of New Source Review. The Trump administration appears to already be heading in that direction, as EPA has convened a New Source Review task force to explore alterations.

The notice released yesterday also offered hints that alterations could become part of the approach to replace the power plant rule.

"Over the years, some stakeholders have expressed concerns that NSR regulations do not adequately allow for some sources to undertake changes to improve their operational efficiency without being ‘penalized’ by having to get a major NSR permit," the notice said. "In the context of [electricity generating units], stakeholders have asserted that heat rate improvement projects could result in greater unit availability and increase in dispatching, which under the NSR program might translate into projected increases in emissions that trigger major NSR permitting."

A power plant’s efficiency is often referred to as its heat rate. A low heat rate means a plant is an efficient producer of power, using less energy to generate electricity and producing fewer emissions as a result. A high heat rate, by contrast, means just the opposite.

Heat rate improvements were one of the three proposed emission reduction strategies outlined in the final version of the Clean Power Plan released under Obama. EPA initially targeted a 6 percent improvement in heat rate efficiency for coal plants in the draft rule. The agency later reduced that target to account for regional discrepancies in the age of plants and the type of coal they burn. Older, less efficient plants in the eastern U.S. that generally burn a dirtier form of coal were given a target of 4.1 percent; the West’s younger and, by comparison, cleaner coal plants were given a target of 2.1 percent.

Experts say it is not entirely clear how much more can be done to improve coal plant efficiency, at least not without dramatically raising plants’ costs. While gas plants have seen their heat rate decrease by 7 percent between 2005 and 2016, coal plant heat rates increased by 1 percent, according to Energy Department data.

Green groups are gearing up for a legal fight against an efficiency-focused rule, as some trade groups praised the possibility of a Clean Power Plan reboot.

NRDC’s Doniger called a weaker replacement of the Clean Power Plan a "non-starter."

"Americans — who depend on EPA to protect their health and climate — deserve real solutions, not scams," he said in a statement.

While a final replacement rule and subsequent court battles are still a long way off, lawyers for environmental groups have already begun to craft their arguments. They note that a plan that has a limited impact on cutting carbon emissions would not stand up in court. They also argue that a limited plan for restricting emissions would not meet the Clean Air Act’s standard of implementing the "best standard of emissions reductions."

Vera Pardee, senior attorney for the Center for Biological Diversity, argues that technology improvements don’t necessarily have to be cheap to pass federal muster, just as long as they doesn’t break the industry financially (Climatewire, Oct. 25).

"The most frustrating thing about this is that the ANPR asks precisely the questions that have been fully litigated and briefed and are pending before the D.C. Circuit," Pardee said.

She noted that EPA under the Trump administration had worked to prevent the D.C. Circuit from deciding the case.

"It makes it absolutely clear the agenda is to do as little as possible," she said.