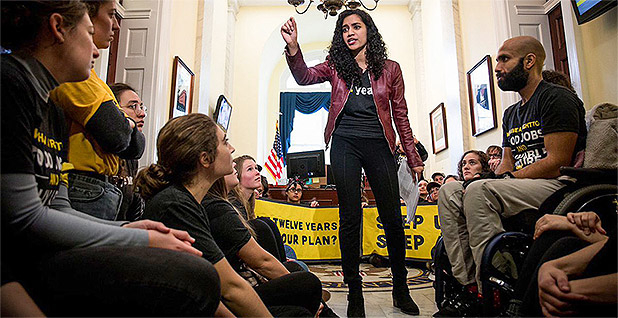 In a letter to lawmakers on Capitol Hill, more than 600 advocacy groups, including Friends of the Earth, Food & Water Watch, the Center for Biological Diversity and the Sunrise Movement, laid down a set of principles, fleshing out the "Green New Deal" proposal floated by Rep. Alexandria Ocasio-Cortez (D-N.Y.).

At the top of the list is an end to all fossil fuel leasing and subsidies and a transition to all renewables "by 2035 or earlier."

"Congress must bring the outdated regulation of electricity into the twenty-first century, encouraging public and community ownership over power infrastructure and electricity choice, as well as permitting distributed energy sources, including rooftop and community solar programs to supply the grid," they wrote.

The letter is the most detailed look yet at what progressives mean when they say "Green New Deal." To this point, conservatives and energy industry groups have criticized the platform for being too vague and overly ambitious given current technology.

But the letter is still largely goals, rather than policies, and some of its more specific proposals won’t sit well with even some Democrats.

For instance, the groups write that any climate legislation should reinstate the 40-year ban on fossil fuel exports, which ended during the Obama administration.

They also said they would oppose any bill to promote "corporate schemes," including carbon capture and storage, emissions trading, and nuclear energy, all seen in some parts of the climate policy world as viable, if incomplete, solutions to global warming.

Other ideas are unsurprising, such as an effort to update the U.S. electric grid and promote battery storage as part of the effort to get to 100 percent renewables.

Progressives also want an economic plan to ensure a just transition for fossil fuel workers and statutory requirements and timelines for EPA greenhouse gas regulations under the Clean Air Act.

For now, the closest thing to the progressive plan is the "Climate Solutions Act," introduced this week by California Democratic Rep. Ted Lieu (Greenwire, Jan. 9).

And while that won’t pass the Senate or be signed by President Trump, progressives are looking to influence Democratic debates in the House headed into the 2020 presidential race.

"As the world teeters on the brink of climate catastrophe, we’re calling on Congress to take large-scale action," Bill Snape, senior counsel at the Center for Biological Diversity, said in a statement. "Americans want a livable future for their children, and that requires keeping fossil fuels in the ground while greening the economy on a wartime footing."