7 cases that reshaped environmental law in 2022 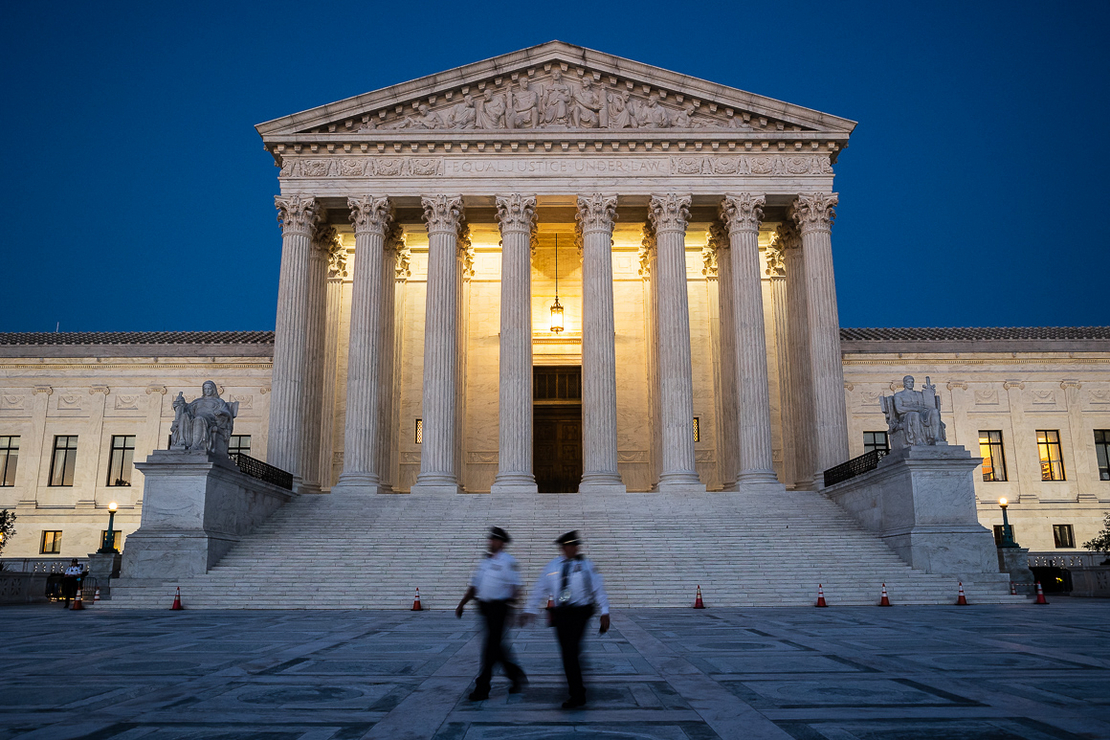 The Supreme Court over the last 12 months has moved swiftly to cuff federal agencies from addressing climate change, health emergencies and other key issues.

Legal observers said to expect more of the same in 2023.

“Administrative law is moving in a direction that is going to be less favorable to agencies, especially as they try to adapt new statutes to old problems,” said Dietrich Hoefner, a partner at the firm Lewis Roca.

Court rulings of 2022 — particularly West Virginia v. EPA, which limited the federal government’s power to address a potent source of greenhouse gas emissions — are packed with lessons for Biden administration regulators who are soon expected to fill the Federal Register with new rules on everything from water pollution to auto emissions.

“Agencies will have to be a lot less cavalier in finding justifications for regulations,” said Jim Burling, vice president of litigation at the Pacific Legal Foundation.

That might be tough, he added, because “we don’t have a lot of specific language in federal law.”

Hoefner said environmental lawyers should be wary of relying on legal precedent that could be at risk of being eradicated by conservative jurists. Those concerns were heightened by the Supreme Court’s decision in June to overturn nearly 50 years of abortion precedent established in the landmark case Roe v. Wade.

“It’s hard to overstate that this court is willing to revisit prior opinions that they believe are bad law and change them to an extent that I don’t think prior courts were willing to do,” he said.

State courts may be more receptive to climate claims than the federal bench, and local governments are fighting to keep dozens of liability lawsuits against Exxon Mobil Corp., BP PLC and other oil majors in front of state judges. Oil and gas companies are urging the Supreme Court to step in and bump the cases to the federal level.

And the Supreme Court is expected to hand down a decision in the coming months in a blockbuster battle that could narrow the scope of the Clean Water Act.

Although the case, Sackett v. EPA, represents another opportunity for the justices to chip away at pollution protections, Kirti Datla, director of strategic legal advocacy at Earthjustice, said oral argument in October left her optimistic that environmental advocates can still score wins in federal court by keeping their arguments focused on statutory text.

“In any case,” she said, “you think about your adjudicator and what arguments will appeal to them, and you put together the best argument for them.”

Here are seven cases that reshaped environmental law in 2022 — and could be consequential in 2023.

In 2023 and beyond, the justices are expected to flesh out the “major questions” doctrine, which it used in West Virginia v. EPA to strike down a signature Obama-era climate rule.

Their next opportunity may come in their decision on one of the Biden administration’s most controversial policies: a plan to forgive up to $20,000 in student loan debt for eligible borrowers (Greenwire, Dec. 5).

Red-state challengers have argued in the courts that the debt relief program — like the Clean Power Plan in West Virginia — violates the major questions doctrine, which says that Congress must clearly authorize agencies to regulate matters of vast economic and political significance.

While the doctrine has existed for many years, environmental lawyers say the way the court used it in West Virginia is new — and the limits of its application unclear.

They fear the justices’ updated approach will be inherently anti-regulatory.

The Supreme Court’s decision in June to overturn 50 years of precedent on abortion access left a question on the mind of environmental lawyers: What other cases are the justices ready and willing to upend?

Massachusetts v. EPA — the 2007 case that said the Clean Air Act authorizes the agency to regulate greenhouse gases as air pollutants — was top of mind for environmental lawyers after the Dobbs ruling (Greenwire, June 24).

While Congress has taken steps to enshrine the Massachusetts finding in federal law, legal observers say other key precedents — like Chevron deference — could be at risk.

The justices had a chance in 2022 to overturn Chevron v. Natural Resources Defense Council — the 1984 case that said federal agencies like EPA should be given leeway to interpret ambiguous statutes like the Clean Air Act — in a complex Medicare case but ended up ruling without even mentioning the doctrine.

Since then, more petitions have arrived at the court asking the justices to do away with Chevron.

At least one of those requests has been rejected — as most petitions are — but Justice Neil Gorsuch has said he would like to bury the doctrine once and for all (Greenwire, Nov. 7).

The Supreme Court could soon wade back into the procedural mess that has stymied dozens of lawsuits from state and local governments seeking payment from the oil industry for flooding, wildfires and other climate change hazards.

After winning a related Supreme Court battle in 2021, oil and gas companies suffered resounding losses in the lower courts as they tried to move the climate liability cases from state to federal benches, where the lawsuits may be more likely to fail.

Now, the companies have asked justices to get involved again. They believe the conservative-dominated Supreme Court may help them stop or delay legal claims that could potentially cost industry hundreds of billions of dollars.

In Suncor Energy Inc. v. Boulder, the first of the new round of Supreme Court petitions, the justices have asked the Biden administration to share its view on the cases. President Joe Biden has faced pressure to support the lawsuits after making a campaign promise to back litigation against the oil industry.

The Supreme Court will then decide whether to add the Suncor case to its docket. It takes the vote of four justices to grant a petition, and the court rejects most requests.

A fight over the metric the federal government uses to justify its climate rules could reach the Supreme Court once more in the new year.

Coalitions of Republican-led states have failed to block the Biden administration’s social cost of greenhouse gas estimates in the lower courts. The 8th U.S. Circuit Court of Appeals recently rejected a challenge led by Missouri, and the states Dec. 5 asked the court to rehear the case (Greenwire, Dec. 6).

They could soon petition the Supreme Court to get involved.

During December oral argument in a separate but related case, the 5th U.S. Circuit Court of Appeals also appeared skeptical that Louisiana and other states had been harmed by the Biden administration’s decision to use an interim social cost of carbon value of $51 per metric ton.

Earlier in 2022, Louisiana lost its Supreme Court bid for emergency relief from the climate metric.

A petition stemming from the 8th Circuit case — or a new plea from the 5th Circuit litigation — would ask the justices to dig into the merits of the red states’ arguments.

A higher estimate of the social cost of emitting greenhouse gases helps federal agencies support the costs of implementing climate regulations. The Trump administration set the number as low as $1 per metric ton.

The Biden administration has not finalized its social cost figure, but EPA in November recommended placing the number as high as $190 per metric ton of CO2.

One of the Biden administration’s top priorities — addressing pollution and climate impacts in Black communities — could be in jeopardy if the Supreme Court limits colleges from considering race in admissions.

During oral argument Oct. 31, the justices appeared open to ruling that Harvard University and other institutions must use “race-neutral” factors — like socioeconomic status and cultural struggles — to achieve diversity goals (Greenwire, Oct. 31).

Depending how broadly it is written, a decision along those lines could limit the Biden administration from explicitly mentioning or considering race when crafting environmental justice policy.

Environmental lawyers have said such an outcome would undercut efforts to address generations of racial injustice that have left Black neighborhoods exposed to higher levels of pollution and more vulnerable to the impacts of climate change.

As one example, the White House Council on Environmental Quality in November unveiled the latest version of its Climate and Economic Justice Screening Tool, but left out race as a factor in determining need for federal funds directed toward disadvantaged communities, although it does display information about race and age (Greenwire, Nov. 22).

The justices are expected to rule in Students for Fair Admissions v. Harvard and a companion case by summer.

In Texas, a legal fight is brewing over a threshold issue that could make it harder for environmentalists and concerned citizens to sue to stop pollution.

The 5th Circuit in August upheld a landmark $14.25 million Clean Air Act fine against Exxon for violations at its Baytown refinery and petrochemical complex near Houston. The ruling was prompted by citizen lawsuits, and Exxon had argued that the court was too sympathetic to challengers’ standing to bring their cases.

Exxon has asked the full slate of the 5th Circuit’s active judges to rehear the case.

If Exxon’s request is rejected — or if the company loses on rehearing — its next stop would be the Supreme Court (E&E News PM, Oct. 24).

Conservative jurists, including some current members of the Supreme Court, have historically fought for a higher barrier to entry for environmental organizations or individuals who allege violations under the nation’s pollution laws (Greenwire, July 19, 2021).

Some lawyers say the Baytown refinery case, Environment Texas Citizen Lobby v. Exxon, could offer the next opportunity for the justices to clarify their views on standing for environmentalists.

The Supreme Court could also speak on standing in United States v. Texas, a case argued in November that deals with states’ ability to sue over federal immigration policies. The ruling could potentially limit states’ standing to sue over or intervene in litigation related to environmental policy.

The justices could also use the immigration case to address nationwide injunctions — or broad orders from lower courts that halt federal policy. Both Republican and Democratic administrations have been affected by the orders.

In perhaps the biggest environmental ruling of 2023, the Supreme Court is expected to decide Sackett v. EPA by early summer, potentially narrowing the scope of the Clean Water Act.

At issue in the case is the definition of which streams and wetlands qualify as “waters of the U.S.,” or WOTUS.

Idaho landowners Michael and Chantell Sackett, represented by the Pacific Legal Foundation, have asked the justices to revisit their ruling in the 2006 case Rapanos v. United States, which splintered the court 4-1-4 and resulted in two competing Clean Water Act tests to determine if a property is beholden to federal permitting requirements.

While federal courts have largely adopted the more expansive “significant nexus” test penned by former Justice Anthony Kennedy in his Rapanos concurrence, the Sacketts and others argue that the late Justice Antonin Scalia’s more restrictive “continuous surface water connection” approach should be considered.

The outcome of Sackett could complicate the Biden administration’s efforts to craft a new WOTUS rule, which is expected to be grounded in Kennedy’s approach.

Ahead of oral arguments in October, legal observers had expected the justices to hand the Sacketts a win. But during arguments, even some members of the court’s conservative wing appeared skeptical of the landowners’ claims (Greenwire, Oct. 3).

Datla of Earthjustice said EPA could score a win in Sackett if some of the court’s more moderate conservatives find that the landowners went too far in their attempt to narrow the Clean Water Act’s application.

Sackett and other opinions expected in early 2023, she said, may be “instructive and illuminating about how this court is thinking about just how much the law should move.”