7 Democrats who might use climate to run for president 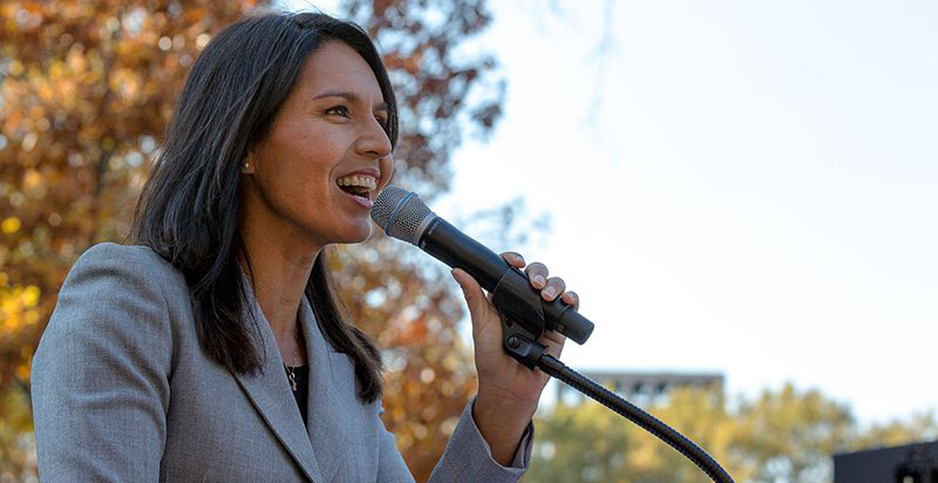 Some Democrats considering a run for the White House in 2020 are seeing historic wildfires in their home state of California. Another has tried to pass a carbon tax, and still another has poured a personal fortune into environmental issues.

Welcome to the next presidential race, where climate change stands a chance of being a high-profile issue.

"Everyone is going to run on climate to one extent or another," said RL Miller, political director at Climate Hawks Vote. "It’s a question of which ones are fiercest."

It’s still unclear who will run, let alone what their policy positions on climate might be. But the potential field of candidates is full of progressives who elevate the environment. That could make the gulf between the political parties bigger than ever on climate. And that’s saying something.

Some likely candidates are already making climate policies central to their political identities. Whether that translates into a climate-focused primary season that the Democratic nominee carries into a general election is anybody’s guess. But observers say it’s possible.

Not everyone is optimistic about the chances of a climate resurgence.

Michael Mann, a climate scientist who advised Hillary Clinton’s campaign, warns that candidates could fall into the trap of the "perfect being the enemy of the good." Maybe they’ll shoot too high and fail.

Mann and environmentalist Bill McKibben urged the Democratic National Committee to adopt a price on carbon in its party platform in 2016. In the end, it was included. But not without a fight.

Here are some potential Democratic hopefuls who might focus on climate change. The list is not exhaustive.

As governor of Washington, Inslee has more power to influence climate policy than members of Congress. He fell short this year of enacting the nation’s first state carbon tax, and now he’s pushing a similar initiative on the November ballot. He has also worked on a proposed high-speed rail corridor linking Seattle with British Columbia.

Inslee recently said Washington’s forests would be "toast" without a broad climate strategy, according to the Daily Chronicle. He doubled down last week on ABC’s "This Week:" "Democrats need to make climate change a front-burner issue. It was really interesting, two days ago we had an interesting historical irony. It was reported that this last year was the hottest year probably in the history of our species. The very same day, Donald Trump purported to try to repeal the emissions rules that defeat carbon pollution, that help decrease transportation cost to get better mileage, because of his slavish devotion to climate denial."

Those are tough words.

His positions have given him a nod from Climate Hawks Vote, a group that backs "aggressive, progressive champions of climate justice" — not just any Democrat who considers "climate to be just another issue bubbling below the surface of top priorities."

As an Oregon senator, Merkley has quietly been amassing progressive points on his resume. He became known for being the only senator to endorse Sen. Bernie Sanders (I-Vt.) in the 2016 presidential election, and he said he’s "exploring the possibility" of running for president in 2020, according to a New York Times profile published in June.

As a member of the Environment and Public Works Committee, Merkley has been beating the drum on climate change. During Rex Tillerson’s confirmation hearing for secretary of State, Merkley pushed him to clarify his ambiguous position on climate change.

He vocally opposed President Trump’s plan to roll back greenhouse gas standards for cars. And Merkley was one of six Democratic senators to call on the Federal Energy Regulatory Commission to include the social cost of carbon when examining natural gas pipeline projects.

As it is with Inslee, Climate Hawks Vote is backing Merkley.

"I certainly hope that one of them stays viable," said Miller of Climate Hawks Vote. "Can the nation handle two tall white men from the Pacific Northwest who are both good on climate?"

Merkley has a 99 percent lifetime score with LCV.

Harris, the freshman senator from California, established herself as a Big Oil aggressor when she served as California’s attorney general from 2011 to 2017. She created the Environmental Justice Unit as the district attorney in San Francisco and threw the book at U-Haul, Alameda Publishing Corp., and those owners and operators responsible for the Cosco Busan oil spill. The idea, she said at the time, was to go after crimes that disproportionately affect poor communities.

Harris has urged individuals to reduce their carbon footprint without offering many specifics about national climate policy. Regarding the wildfires raging through California, she recently said, "Let’s all agree on that and think about what we can do to reduce the effects of climate change."

Though she lacks national political experience, she has raised $4 million for her colleagues and is possibly laying the groundwork for a 2020 presidential run. Last month, she told MSNBC that she was not ruling it out.

Harris has a 100 percent rating from LCV, and she’s considered an environmental champion by many progressives. But she does not have a big climate profile, largely because she sits on the Intelligence, Budget, and Homeland Security and Governmental Affairs committees. Many of her climate-related votes were in opposition to bills seeking to reverse environmental protections (E&E Daily, July 10).

What more needs to be said about Vermont’s independent senator?

Sanders sought to distinguish himself in the 2016 race by talking often about climate change in stark terms. He successfully fought, through intermediaries, to include the idea of a carbon price in the Democratic platform, a move that contrasted to Clinton’s more modest climate policy.

As a member on the Senate Environment and Public Works Committee, Sanders called for a 40 percent reduction in greenhouse gas emissions, a carbon tax, a clean energy job force and nationwide high-speed rail. He also wanted to slowly rescind fossil fuel subsidies, and he called for the eventual end of nuclear energy.

"As we see more and more drought, as people around the world are unable to grow the food they need to survive, people will migrate for survival. Instability can cause international conflict," Sanders said.

Combating climate change was ranked sixth in a long list of issues on his campaign website. Sanders has a 92 percent lifetime score with LCV.

The first Hindu member of Congress, the representative hails from Hawaii, where politicians tend to be bluer than the ocean.

Gabbard sponsored the "Off Fossil Fuels for a Better Future Act," an ambitious climate bill that would phase out fossil fuel energy sources by 2035. It also calls for an end to subsidies for drilling, mining and refining companies. And it would establish programs to help fossil fuel workers get jobs in renewable energy industries.

In 1996, she co-founded the Healthy Hawaii Coalition with her father, Mike Gabbard, a Democratic state lawmaker. The group teaches about pollution, the environment and health.

A member of the Progressive Caucus, Gabbard broke with the DNC, which she vice-chaired, so she could endorse Sanders for president.

Gabbard has a 96 percent lifetime score from LCV.

Before the term was ever used, the California governor was a climate hawk. That identity has intensified since the Trump administration pledged to pull the United States out of the Paris climate accord. He collaborated with other nations to promote achieving the agreement’s goals.

A year after Trump promised to withdraw from the agreement, Brown, Inslee and New York Gov. Andrew Cuomo (D) (also considered by some to be a climate champion) penned an op-ed touting their states’ booming economies.

"In just one year, the alliance has grown into a bipartisan coalition of 17 governors representing 40% of the U.S. population and a $9 trillion economy — larger than that of every country in the world but the U.S. and China," the trio wrote in USA Today.

Next month, Brown is hosting the Global Climate Action Summit in San Francisco. The summit will bring together leaders from around the world with the theme "Take Climate Ambition to the Next Level."

Brown’s black eye could be his controversial $77 billion high-speed rail project that has come in seriously over budget and behind schedule. The line from Los Angeles to San Francisco is now scheduled to open in 2033, four years later than previously planned.

Steyer is known for two things: being a climate activist and working to impeach Trump.

Through his organization NextGen America (originally called NextGen Climate), Steyer has raised and spent hundreds of millions of dollars on progressive issues throughout the country. His focus is on voter registration and turnout.

He has said he won’t rule out a presidential run.