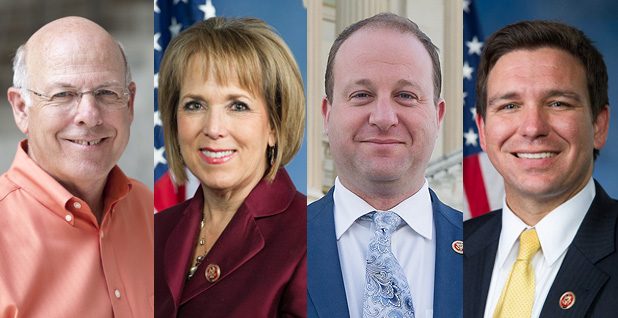 The gubernatorial situation for Democrats can’t get much worse. The party has been witnessing a historic deficit, holding just 16 executive seats out of the nation’s 50 governorships.

That could change this fall.

Thirty-six states will elect governors in November, and 23 of those are held now by Republicans.

Couple that with President Trump’s low approval ratings and what Democrats hope will be a wave congressional election, and the party sees a chance to slice down that executive deficit.

For environmental groups, these races are particularly important. Green groups and other progressive causes have turned to the states to fight the Trump administration’s agenda, and a spate of Democratic primary candidates are running as the person who opposes Trump the most.

"The stakes are high because of such a hostile Congress and president to our nation’s environment and public health," said Pete Maysmith, vice president for campaigns at the League of Conservation Voters.

"We need executives in governor’s mansions who are going to lead in protecting clean air, water and expanding renewable energy."

The governors elected in November will also play a role in congressional redistricting after the 2020 Census.

"Democrats are poised to grow their number of governors, giving them more control over policy and a greater voice in the redistricting process," wrote nonpartisan political handicapper Nathan Gonzales in his 2018 gubernatorial analysis titled "Democrats Rising."

With primaries heating up with the weather, here’s a look at some of most consequential gubernatorial races for environmental and energy issues this fall.

The Colorado race will be one of the most-watched in the nation, with wealthy candidates boasting packed resumes in both party primaries.

Outgoing Democratic Gov. John Hickenlooper has been "more of a supporter of strong environmental policies than not," said Maysmith.

Hickenlooper added Colorado to the coalition of states pledging to meet the Paris climate standards.

Meanwhile, public lands issues and water shortages due to the booming population in the Front Range region have become particularly salient in recent years.

Stapleton promises to be a friend to the state’s oil and gas sectors — particularly natural gas. Hydraulic fracturing is a major issue in Colorado.

Democrats have a wealth of options, with three prominent candidates with similar progressive platforms.

Polis and Johnston are campaigning on plans to power Colorado entirely on renewable energy by 2040, while Kennedy pledges to "meet and exceed the goals of the Paris Climate Agreement."

The Sunshine State has a history of close, pricey races — outgoing governor and U.S. Senate candidate Rick Scott won both his gubernatorial campaigns by about 1 point — and this year looks no different. Fraught primaries on both sides mean millions of dollars are already pouring into the race.

On the GOP side, state Agriculture Commissioner Adam Putnam is massively well-funded, with more than $19 million on hand and nearly $27 million raised overall, according to campaign finance filings.

Putnam, a business-friendly former House member who has carefully crafted his run in recent years, boasts contributions from major Florida industries. His ties to sugar producers have brought criticisms from environmentalists who say he has neglected state water quality as agriculture chief.

The wild card is Rep. Ron DeSantis (R), who jumped into the race riding a Trump Twitter endorsement. The tea-party favorite has raised about $7 million, in all, and boasts support from major national donors including Sheldon Adelson and Rebekah Mercer.

Primary polls show a close contest with a significant number of undecided voters — and solid support for Trump.

To add to the morass, another strong contender, House Speaker Richard Corcoran, could enter the race this month.

Graham, whose father was elected both governor and senator, has been outspoken on environmental issues.

Environmental groups are eager to replace pro-development LePage, who doubts the science of human-caused climate change and considers global warming a possible boon for human beings.

On the GOP side, former state Health and Human Services Commissioner Mary Mayhew and state University of Maine System trustee Shawn Moody are the front-runners.

Meanwhile, state Treasurer Terry Hayes, a former Democrat, is running as an independent and could upset the race.

Gov. Larry Hogan is the rare popular Republican in a blue state, ranking near the top in approval ratings for governors nationally.

The moderate Republican has backed a hydraulic fracturing ban and a variety of green energy spending initiatives. He has also criticized Trump on numerous occasions — calling on EPA under Scott Pruitt to continue the cleanup of Chesapeake Bay — and refused to vote for Donald Trump in the 2016 presidential election.

With Trump’s bottom-scraping approval rating in Maryland — he lost by 26 points in 2016 — Democrats see a chance to flip the state blue. Hogan is only the second Republican to win the governor’s race in Maryland in more than 50 years.

Jealous boasts the highest-profile endorsements, including Sens. Kamala Harris (D-Calif.), Cory Booker (D-N.J.) and Bernie Sanders (I-Vt.), as well as green backing from 350.org and Friends of the Earth Action.

Minnesota is coming off eight years of Gov. Mark Dayton (D), a strident environmental advocate who fought mining in the state’s northern forests, signed renewable energy measures and pushed conservation in the Land of 10,000 Lakes.

"Making sure we have continued pro-environmental leadership is key," said Maysmith.

Both state chambers have gone red in recent years, and Dayton has vetoed a number of bills opposed by green groups.

A familiar face will try to flip the governorship red. A former governor and presidential candidate, Tim Pawlenty, wants his old job back. Pawlenty’s name recognition and fundraising prowess ensure that national Democrats will devote resources to the race, even if it still leans blue, according to most handicappers.

"At a minimum, Pawlenty’s entry will force Democrats to spend more time and money on the race," Gonzales wrote in his state analysis.

"But the former two-term governor, who won both races with less than 50 percent (44 percent in 2002 and 47 percent in 2006), will have to answer for becoming a lobbyist for the financial services industry after he left office, and Democrats are anxious to talk about the economic condition of the state during his time as governor."

Rep. Tim Walz is the Democratic front-runner, but faces a tough primary in the form of state Rep. Erin Murphy and state auditor Rebecca Otto.

Known as a farm advocate in Congress, Walz is campaigning to cut greenhouse gas emissions by 80 percent by 2050.

The Silver State seat looks to be a likely pickup for Democrats with centrist Republican Gov. Brian Sandoval set to leave office.

Sandoval has not endorsed the Republican front-runner, Attorney General Adam Laxalt, a staunch conservative known for his opposition to President Obama. Sandoval has supported renewable energy, an increasingly important issue in Nevada politics.

Democrats expect high turnout. Sen. Dean Heller (R), perhaps the most vulnerable Senate incumbent, is up for re-election this fall, and the party plans to devote significant resources to unseat him.

The state and national party has coalesced around Rep. Michelle Lujan Grisham. She leads state Sen. Joe Cervantes and businessman Jeff Apodaca in the Democratic field. She boasts a 91 percent lifetime score from the LCV.

Environmental groups consider Pearce an enemy. The Center for American Progress placed him on a list of it called the "Anti-Parks Caucus." Pearce supports Trump administration attempts to downsize national monuments and overhaul the 1906 Antiquities Act.

He also opposes emissions regulations, adding an amendment to the House omnibus last year to block the implementation of federal methane emissions standards on public lands.

The primary is June 5.

Correction: Ryan Bundy is running in Nevada as an independent.