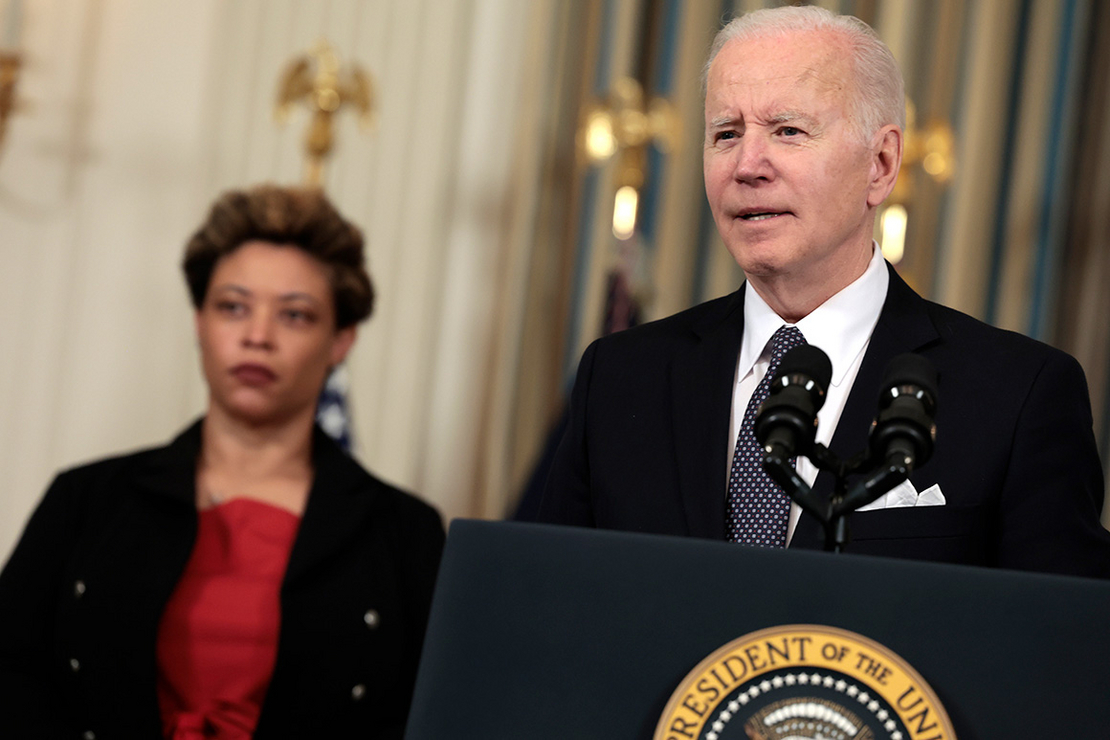 President Biden during remarks on the fiscal 2023 budget yesterday. He was flanked by Office of Management and Budget Director Shalanda Young. Anna Moneymaker/Getty Images

At more than 1,400 pages and filled with thousands of items spelling out how the Biden administration would spend $5.8 trillion in fiscal 2023, understanding what’s in the annual federal budget plan can seem daunting.

But as President Biden rolled out his latest spending proposal yesterday, he cautioned against becoming too focused on the endless string of numbers and said to consider the policies and ideas behind them.

“Don’t tell me what you value, show me your budget and I’ll tell you what you value,” said Biden, who said his top three priorities are fiscal responsibility, safety and security, and investments for building a better nation.

E&E News scoured the budget plan to find the most important energy and environment numbers to watch in coming month as spending negotiations unfold. Those figures tell the story of how the administration hopes to focus its climate and clean energy spending in fiscal 2023 as well as where those plans could face resistance on Capitol Hill.

Here are the numbers to watch:

Biden is once again proposing an ambitious budget for EPA, which at $11.9 billion would be a 25 percent increase over current spending of $9.5 billion. It, however, seems certain to be scaled back by an evenly divided Congress, just as a similarly bold increase for EPA was in fiscal 2022, to under 5 percent.

“After years of Trump budgets that didn’t even mention the word ‘climate,’ President Biden’s plan would boost investments in clean energy, lower the costs of energy for low-income Americans and speed up our transition to clean cars,” said Senate Majority Leader Chuck Schumer (D-N.Y.).

Many Democrats will reiterate Schumer’s argument as budget negotiations unfold over coming months, a move that will appeal to environmental groups ahead of the elections. They’ll argue that if they lose control of Congress in the midterms, EPA won’t even be able to count on modest budget increases in future years.

EPA’s proposed increase would apply broadly across the agency, boosting the agency workforce to levels not seen since the Obama administration. Programs including Superfund and diesel emissions grants would also see substantial increases, while the agency’s clean and safe drinking water grants programs would be stagnant after getting billions in last year’s infrastructure bill (Greenwire, March 28).

Clean energy is fueling a proposal by the White House to increase the Energy Department’s budget by 7 percent, or $3.3 billion, to $48.2 billion in fiscal 2023.

The request seeks $4 billion for DOE’s Office of Energy Efficiency and Renewable Energy, a 25 percent increase over a record $3.2 billion in fiscal 2022.

While clean energy research has a history of drawing bipartisan support, Republicans aren’t sounding as if they’ll back even those less controversial proposals ahead of this fall’s elections, hoping to make it a referendum on Biden’s energy agenda.

“This is not a budget American families can afford and doubles down on radical rush-to-green policies that will continue to deprive people of reliable, affordable energy,” said Rep. Cathy McMorris Rodgers (R-Wash.), ranking member on the Energy and Commerce Committee. “To lower costs for people across the board, we need to flip the switch on American energy by strengthening our energy security, improving our critical supply chains,and easing the regulatory burdens imposed on the industry under this administration.”

The Interior Department would see its budget rise to $17.5 billion in net discretionary spending, a 24 percent rise over the current 2022 level of $14.1 billion, under a budget plan that provides increases across agencies and programs.

The National Park Service, which saw a big jump from the previous year to $3.26 billion in the omnibus, would get $3.6 billion under the proposed budget. The Bureau of Land Management would receive an increase of nearly $300 million to $1.6 billion. The Fish and Wildlife Service would see a rise to $2 billion, up from about $1.64 billion (Greenwire, March 28).

The Civilian Climate Corps, an idea popular with progressives, would get $60 million in the DOI budget and another $20 million from the Labor Department. It falls well short of initial calls for billions in funding for CCC, but funding it in smaller pieces might help it survive in Congress.

Like EPA, Interior’s proposed increases seem destined to be scaled back as they were last year — probably to around a 5 percent hike, not the more than 20 percent proposed.

Biden insists one of his most important priorities is cutting the deficit, which would be halved to $1.4 trillion in fiscal 2023 as pandemic spending eases.

But Biden has another reason for reining in red ink: Sen. Joe Manchin. The West Virginia Democrat — who has held up negotiations on the $1.7 trillion package of climate and social spending known as “Build Backer Better” — also prioritizes deficit reduction.

Manchin has argued that a chunk of new revenues raised by rolling back tax breaks in proposed “Build Back Better” legislation should go to cutting the deficit rather than new social spending initiatives.

The president’s budget plan does not specifically mention “Build Back Better.” Administration officials say they want to give Congress time to hammer out the details and are wary of presupposing any new “BBB” spending or savings.

But many see the deficit goal as a backdoor nod to “BBB,” a signal that the White House would be open to even more. It remains to be seen if Manchin is listening.

During brief comments to reporters yesterday, Manchin appeared to say there were no serious talks on the budget reconciliation legislation. He reiterated his goal of getting the country’s “financial house in order.”

That’s how much the budget plan requests for its proposed Advanced Research Projects Agency-Climate at EPA, a new priority last year for the White House that Congress never funded.

But the search for breakthrough climate technologies isn’t ending.

Instead, the budget proposes that the existing Advanced Research Projects Agency-Energy at DOE expand its scope to focus on greenhouse gas reductions. The budget proposes $700 million for ARPA-E, up from the $450 million doled out to the perennially popular program in the fiscal 2022 omnibus.

ARPA-E has a history of support from both parties, which could make it an ideal place to secure climate research dollars.

Republicans already are arguing Biden’s plan for increasing defense discretionary spending by 4 percent to $813 billion is far below what the military needs.

“Our armed forces may get the short end of the stick from this White House, but plenty of far-left defense priorities will be literally swimming in cash,” said Senate Minority Leader Mitch McConnell (R-Ky.), who accused Democrats of wanting to “pour money into absurdities like United Nation Green Climate Fund” and “something called environmental justice?”

Indeed, the GOP is not likely to go along with a plan to fund $1.6 billion for the Green Climate Fund, the international climate aid account that it blocked all funding for in fiscal 2022.

Several GOP lawmakers called for a return to “parity” between defense and nondefense spending that was the linchpin of the fiscal 2022 omnibus spending deal. They said the 4 percent increase for defense is far out of line with the 14 percent being proposed for domestic spending in fiscal 2022.

Democrats already know those domestic numbers will have to come down, but ahead of elections they are eager to highlight their priorities.

House Appropriations Chair Rosa DeLauro (D-Conn.) acknowledged that reality yesterday. “We must work together to get our spending bills over the finish line — no one chamber or party can do it alone,” she said.

$3.4B for fossil fuel taxes

The White House sees new tax revenue as vital to achieving its goal of cutting the deficit by $100 billion annually over the next decade and halving it to $1.4 trillion for fiscal 2023.

Part of the savings would come by repealing fossil fuel tax breaks, saving $3.4 billion in fiscal 2023 and $43.6 billion over 10 years. Biden floated the idea last year, too, but it has not gained much bipartisan traction in Congress (Greenwire, March 28).

The idea could face an even cooler reception this time around, as many Republicans and some moderate Democrats, including Manchin, argue now is not the time for cuts. They say the credits are an incentive to domestic energy producers to ramp up their production in the United States to reduce reliance on Russian and other foreign oil.

Environmental groups, however, welcomed calls for ending a range of corporate tax breaks.

“The President’s budget … helps ensure corporations and the wealthiest pay their fair share to fund critical federal government services. These are especially essential investments at a time when oil and gas companies are profiteering off the crisis in Ukraine by gouging American consumers at the pump,” the League of Conservation Voters said in a statement.