7 Senate races to watch on energy and environment 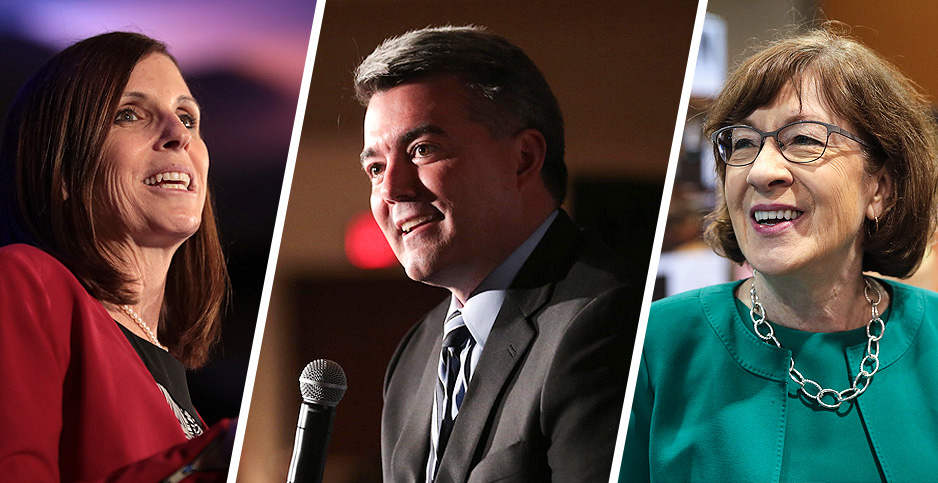 While the 2020 presidential race rages on, the year’s Senate election cycle is shaping up to potentially shift environmental, energy and climate change policy in a dramatic way.

For the Republicans, 2020 is a year to defend their majority, which has reinforced Trump’s regulatory rollbacks while confirming administration officials and judges.

The Senate GOP’s best shot at building on its majority — or stopping the Democrats from taking the reins — in 2020 is in deep-red Alabama.

A switch in the chamber’s control would mean McConnell, who has resisted allowing votes on climate change and other Democratic priorities, would no longer set the agenda.

There has not been much polling, but what’s been done shows Sessions with a big lead. In a poll released last week commissioned by his campaign, he had the most support, 44%, of GOP primary voters. Tuberville was a distant second at 21%.

"I was there for the Trump agenda every day, I was there, there’s no doubt about it. I was the first Republican, the first senator to endorse him," Sessions said on Fox News last month when he launched his campaign.

McSally lost the 2018 race for Arizona’s other seat to Sen. Kyrsten Sinema (D), but Gov. Doug Ducey (R) appointed her to replace the late Sen. John McCain (R). She faces a special election on Election Day.

Kelly frequently speaks about the need to fight climate change coming from the scientific perspective, linking it to his career as an engineer and scientist. He’s earned the backing of the League of Conservation Voters Action Fund and 314 Action, an organization that works to elect scientists.

"We’ve got to figure out a way to get from fossil fuels to more renewable energy. And I think we’ve got a decade or so to figure it out, but we can’t wait," he said in a recent appearance on ABC’s "The View." He also spoke about how he could see the impacts of climate change from multiple space shuttle missions, including deforestation from wildfires.

Kelly’s been leading on the money front, having raised nearly $4 million more than McSally.

But opponents say he hasn’t lived up to his promises and has instead stood with the GOP and Trump in backing environmental rollbacks and supporting the fossil fuel industry.

He has been outspoken against the Green New Deal, labeling it "radical" and "socialist." He released an ad in October presenting himself as an ally to the oil and natural gas industry who would push back against Democrats’ attempts to further regulate it.

Andrew Romanoff, former speaker of Colorado’s state House, has emerged as the chief progressive challenger to Hickenlooper. He’s embraced the Green New Deal and has released an ad on climate this week depicting a post-apocalyptic future in Colorado while highlighting current climate impacts.

Collins has long bucked the GOP on climate. She’s been harshly critical of Trump’s actions, such as repealing the Clean Power Plan and exiting the Paris Agreement, and has been a leading sponsor on environmental legislation.

If Gideon wins, it will likely come down to Collins’ numerous votes to confirm some of Trump’s more controversial nominations, including Interior Secretary David Bernhardt and Supreme Court Justice Brett Kavanaugh.

She was the only Republican to sign a letter earlier this month to Patricia Espinosa, executive secretary of the United Nations Framework Convention on Climate Change, saying that despite Trump’s actions to exit the Paris Agreement, the United States is still committed to fighting climate.

"We need a new agenda; that’s what the Green New Deal is," Markey said at a November forum with opponent Shannon Liss-Riordan that Kennedy declined to attend because he believed it should have been in 2020 and held in a minority neighborhood.

"It’s meant to create a political revolution in our country that will change the way in which people view these issues," Markey said.

He has been an ally for environmentalists and said he supports "aspects" of the Green New Deal, though he hasn’t signed on as a co-sponsor to the resolution. That’s enough for conservatives to slam him, though not enough for climate activists such as the Sunrise Movement, which organized a sit-in at his Lansing office.

"Is it the 1.4 million fewer jobs you support, or the part where we abolish gasoline cars, or airplanes, or red meat?" a voice-over says in a television ad the group produced, a question directed toward Peters during a February forum. "How about the $40,000 extra it’ll cost each family?"

The incumbent was one of LCV’s first endorsements of the 2020 Senate cycle.

Thus far, Tillis’ main hurdle has appeared to be the GOP primary. While he has Trump’s support, the state’s Republicans have been skeptical about him, and a crowd at a Trump rally in September booed when Tillis came to the stage.

Tillis’ leading rival for the nomination was businessman Garland Tucker, but he dropped out this month. Rep. Mark Walker, a conservative Republican, also toyed with running against Tillis but decided against it; Walker said Trump indicated he would support him in a 2022 Senate run.

Beyond LCV’s endorsement of Cunningham, energy and environmental groups might jump more fully into the race once it ramps up.

A September poll from left-leaning Public Policy Polling found he had just a 33% approval rating and would lose to Cunningham by 2 percentage points. LCV’s lawmaker scorecard gives him just 7%, and environmental groups see climate as a major issue of interest in the coastal state with a big tourism industry.

"Taking on climate change is going to be a priority of mine because of the impact it’s having right here in North Carolina," Cunningham said in an ad earlier this year that highlighted increasingly severe hurricanes and other climate-linked impacts in the state.

The Trump administration’s now-paused plan to allow offshore drilling along the entire Atlantic Coast was unpopular in North Carolina, and Tillis’ support for drilling and refusal to denounce the plan could also play into the race.