7 ways Trump’s wish list could gut his own goals 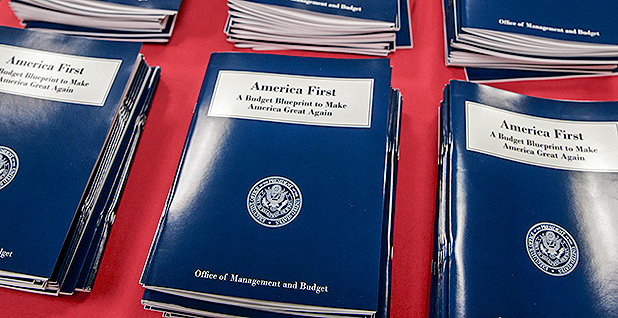 Steep spending cuts in the budget proposal President Trump releases today would run counter to many of the administration’s core energy and environment objectives.

Trump is aiming to increase defense dollars and balance the budget without raising taxes, making raiding coffers at agencies like U.S. EPA and the Energy Department appealing.

The president’s budget outline from March would increase defense funds by $54 billion, offset by cuts to environmental programs, health and education.

Some of those reductions could undercut core campaign promises, including to boost the coal industry and build up the nation’s roads, bridges and other infrastructure.

"The expectation is that their voters won’t know or will blame someone else," said Stan Collender, a federal budget expert at Qorvis MSLGROUP.

Collender said while every president’s budget is "part political statement, part accounting document," Trump’s is "one of the most ideological" he’s ever seen.

Lawmakers are likely to have a hard time accepting the numbers, especially when they’re already hearing from worried local and state environmental officials. Many observers say Trump’s outline is dead on arrival.

A standoff between Congress and the White House in the fall could end with an extension of current spending levels. Or Congress could aim for cuts that don’t go quite as far as Trump envisions. The House and Senate will have to sort out whether to keep paying for some of the administration’s promises.

Here are a few areas where the White House’s budget proposal and policy plans conflict:

Throwing a lifeline to coal

When he signed an order to rescind climate rules, Trump confidently told the coal miners surrounding him on stage at EPA headquarters, "You’re going back to work." Vice President Mike Pence declared, "The war on coal is over" (E&E News PM, March 28).

Two weeks later, EPA Administrator Scott Pruitt visited a coal mine in Pennsylvania to tell workers there they had a new partner in the federal government (E&E News PM, April 13).

Most of the industry, however, recognizes that coal use will continue to decline under Trump. Cheap, lower-carbon natural gas is pushing coal off the market, as is renewable power. The only surefire way to boost coal use would be to discourage natural gas production, but Trump wants to do the opposite.

Coal supporters want Trump to limit regulations and invest in researching technologies to capture carbon, so American coal can continue to burn here and may be more appealing to buyers overseas down the line.

But Trump will propose to cut the Energy Department’s office for fossil fuels 54 percent, according to a budget document viewed by Axios.

The office looks at carbon capture and sequestration technology, as well as ways of burning coal more efficiently to save money and curb pollution.

"Deep in coal country, the headlines are going to be, ‘Trump delivers budget as he promised,’ and it’s going to focus on balancing the budget as opposed to the individual piece," he said.

Trump and Pruitt have both nodded to the importance of clean air. In his first speech to Congress in March, Trump listed clean air and water as areas in which his administration would invest (Climatewire, March 1).

In speeches with state and local leaders, Pruitt has said he wants to focus on air quality attainment, citing statistics that 40 percent of Americans breathe air that doesn’t meet current federal standards.

Trump’s proposal for the EPA budget, however, would cut clean air programs nearly in half (Climatewire, May 22).

Pruitt rose through the ranks of the conservative legal world by promoting federalism and states’ rights and railing against executive branch overreach by the Obama administration (Climatewire, Jan. 18).

EPA wants to return more authority to states while also cutting their funding for implementing environmental laws by 45 percent, according to an early draft of the budget. That includes a 30 percent reduction for state and local air quality control agencies to implement the Clean Air Act (Climatewire, May 22).

The group that represents state and local air regulators, the National Association of Clean Air Agencies, released a survey of members yesterday that said "agency after agency painted a similar picture of severe curtailments to their programs in the face of the steep cuts being proposed: loss of staff, cancellation of programs and a diminished capacity to obtain and maintain healthful air quality" (see related story).

Vowing to clean up sites contaminated with toxic pollutants is a quick way for Pruitt to win support from local leaders, and it’s been a core part of his message every time he meets with them.

EPA earlier this month said it would prioritize and streamline the approval process for sites with a cleanup price tag of $50 million or more (Greenwire, May 11). Yesterday, the agency announced the creation of a Superfund task force. At the same time, Trump wants to cut funding for Superfund cleanup by about a third.

There are more than 1,300 Superfund sites awaiting work. New Jersey alone is home to 114, more than any state.

On the campaign trail, Trump promised to rebuild the country’s roads and bridges with $1 trillion in infrastructure spending and played up his experience as a builder and real estate developer.

Now, the White House is proposing to slash the Transportation Department’s discretionary spending by $2.4 billion, or 12.7 percent. The cut would scrap popular grants for roads and transit and support for rural airports and trains.

Mick Mulvaney, the director of the Office of Management and Budget, said at the time that the Transportation Department cuts would be offset by a more efficient use of federal funds as part of the much-touted infrastructure package expected to hit Capitol Hill this fall. The White House spending plan released today includes $5 billion for direct spending on infrastructure in fiscal 2018. Those funds would ramp up over 10 years to reach $200 billion. The administration has said it will use the federal cash to "incentivize" additional spending by local, state and private partners. The spending plan does not detail where the administration will get the money.

Trump and Interior Secretary Ryan Zinke have repeatedly called for more fossil fuel development on public lands, but a 12 percent cut to the Interior Department could hamper those efforts.

Trump’s budget proposal was short on specifics but argued for increasing funding for Interior programs that "support environmentally responsible development of energy on public lands and offshore waters" and "allow DOI to streamline permitting processes."

Observers say a drop of $1.5 billion from the fiscal 2017 funding levels could make streamlining oil and gas permitting an even bigger challenge for the already resource-strapped Bureau of Land Management. As of April 30, BLM had nearly 3,000 outstanding bids to drill on public lands (Energywire, May 17).

Getting work done at parks

Democratic lawmakers and conservation groups say budget cuts could make that harder, too.

"A drastic cut like this will only exacerbate the problem of deferred maintenance and kick the can further down the road instead of protecting public places for future generations," Rep. Colleen Hanabusa (D-Hawaii) said at a House Natural Resources Subcommittee on Federal Lands hearing in March (Greenwire, March 16).