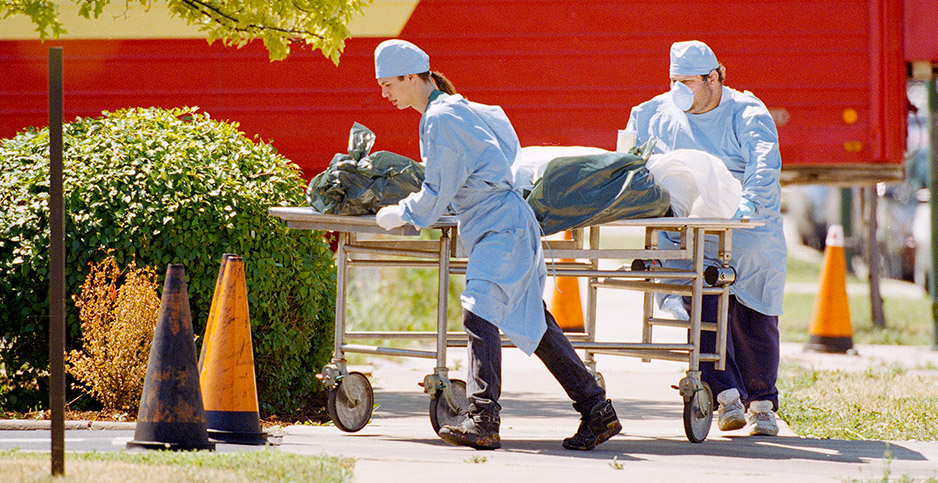 Workers at the Cook County morgue in Chicago wheel a body to a refrigerator truck in July 1995. Several trucks were parked near the morgue to handle an overflow of bodies from a historic heat wave that killed 739 people. Mike Fisher/AP

Twenty-five years ago this week, the Chicago coroner’s office was swimming in corpses.

It began as a trickle, when four bodies were discovered in poorly ventilated homes and low-rent apartments on Monday, July 13, 1995. The temperature was 113 degrees Fahrenheit, but it felt like 126.

Then it got hotter.

As temperatures spiked — peaking at 115 degrees that Tuesday — so did the death count.

By the end of the week, 735 more victims — mostly elderly and poor — succumbed to unbearable heat and humidity, making the 1995 Chicago heat wave one of the deadliest climate disasters in U.S. history.

It killed three times as many people as Superstorm Sandy (117 victims) and Hurricane Harvey (107), combined.

Nobody described heat waves as climate disasters in 1995. In fact, then-Mayor Richard M. Daley initially dismissed it as routine summer heat, then blamed the media for hyping the event.

"It’s hot. It’s very hot. But let’s not blow it out of proportion," Daley said as criticism mounted over City Hall’s plodding response to the rising death toll, according to "Heat Wave: A Social Autopsy of Disaster in Chicago," by New York University sociologist Eric Klinenberg.

Daniel Alvarez, the city’s human services commissioner, went so far as to characterize the spike in mortality as "people who die because they neglected themselves." He later apologized and said the city would learn from its mistakes.

Today, Chicago is a model for other cities facing extreme heat, in part for its preparedness protocols, special training for first responders and outreach to vulnerable populations.

Four years after the 1995 disaster, on July 29-31, 1999, a nearly identical bubble of extreme heat and humidity enveloped the city, killing 114, according to Cook County records. The city of Chicago still hadn’t connected the dots between heat and climate.

"It was worst in older neighborhoods in more industrialized parts of the city, where many of the homes and businesses had little ventilation and black roofs," said Howard Learner, executive director of the Environmental Law & Policy Center, based in Chicago. "And where you have older buildings mixed with industrial facilities — like we have on the South Side of the city — they tend to be surrounded by hot asphalt."

A 2001 analysis by the Midwestern Regional Climate Center in Champaign, Ill., noted "the complexities of climatology" during the 1995 and 1999 heat waves. Nowhere in the 16-page report do the words "climate change" appear.

The city of Chicago also failed to understand how incidences of rising heat combined with oppressive humidity — what meteorologists call a "heat dome" — were a time bomb waiting to go off, said Daniel Horton, an assistant professor at Northwestern University in Evanston, Ill., and director of the university’s Climate Change Research Group.

"It’s just incredibly dangerous to people living in urban heat islands," Horton said. "There’s simply no ventilation, and that leads to conditions that are inhospitable to human habitation. Climate change is going to make those conditions even worse."

Perhaps it already is. There’s been an upward trend in summer daytime and overnight high temperatures since the 1950s, though they’re rising less rapidly than in some major U.S. cities.

Climatological studies suggest Chicago will be 5 to 9 degrees warmer by 2100, with some projections of between 9 and 13 degrees, according to data compiled for the Chicago Metropolitan Agency for Planning.

Chicago can swing from comfortable to sweltering at the peak of summer. That variability is due in part to its unique geography on the shore of cold Lake Michigan, whose winds can cool the city one day and deprive it of relief the next. A strong lake breeze can create a 20-degree differential between the waterfront and neighborhoods 10 miles inland.

The city also has a propensity for extreme summer humidity, with dew points sometimes soaring into the 70s — solidly within the "misery index," as forecasters call it. During the 1999 heat wave, Chicago set an all-time humidity record with an 83-degree dew point on July 30.

The Chicago Climate Action Plan, now 12 years old, estimated the city could see 90-plus-degree days increase from 15 days a year to between 35 and 56 days. That’s nearly a fourfold increase under a high greenhouse gas emissions scenario.

"A Chicago summer late in this century could feel like that of Mobile, Alabama, today," the plan says.

The city of Chicago has not stood still. Since the early 2000s, it has worked to become a leader in urban heat adaptation and resilience. A city spokeswoman said emergency management officials are "very proactive" about dangerous summer heat.

When heat indexes are forecast to exceed 110 degrees on a single day or 105 degrees over consecutive days, the city activates an extreme heat emergency response plan. Among other things, the plan requires the opening of six cooling centers and 50 cooling buses, as well as routine wellness checks for homeless, elderly and disabled residents.

But adapting to extreme heat in a huge city is a quest that never ends.

In eight of the last 10 years, Chicago has recorded daily high summer temperatures of 95 degrees or higher. In 2012, the city saw its hottest Independence Day ever at 102 degrees. It got hotter on July 5 and 6, marking the longest string of consecutive 100-plus-degree days in city history.

Last month, the city experienced six days at 90 degrees or hotter, including a 94-degree sizzler on June 2. That’s 18 degrees above average for that day.

July is on a similar record-breaking trajectory. Seven of the first 10 days saw the mercury hit 90 or above, including four consecutive days last week that reached between 92 and 94 degrees. That’s 8 degrees above the historical average.

The surge in sweat-pouring days and sleepless nights is challenging the long-held truism that Lake Michigan is Mother Nature’s air conditioner.

Lake breezes: Relief for the rich

"She is when she is, and she’s not when she’s not," said Patricia Abrams, founder and executive director of the nonprofit Renaissance Collaborative, which provides shelter, housing and other social services to homeless and low-income people in Chicago’s Bronzeville neighborhood. "It just comes, and people do what they can do. We live with it, then we move on to something else."

Living with the heat — and dying in it — occurs disproportionately in lower-income neighborhoods and communities of color.

They’re away from the cool lakeshore, where upscale high-rises dominate the landscape. In poorer neighborhoods, cooling centers, fire hydrants and splash pads remain primary cooling sources during the day, especially for the elderly and the young.

But those solutions don’t address more troubling conditions brought on by summer heat in distressed communities.

The 2012 Independence Day heat wave, for example, coincided with more than 20 shootings and three gun-related deaths in Chicago, according to media reports at the time. A 2018 high-heat event coincided with 11 shooting deaths and more than 60 people injured.

Sociologists found then, as now, that inner-city neighborhoods suffer heat differently than affluent ones. A 2018 study of Chicago crime data found a "strong dependence of aggressive crimes on temperature, where higher temperatures than usual — especially in June and July — were associated with a sharp uptick in aggressive crimes."

The trend is expected to increase under climate warming, according to a 2014 study by economist Matthew Ranson of Abt Associates and Harvard University’s Environmental Economics Program.

And it isn’t only violent crime.

Abrams of Renaissance Collaborative moved to Chicago from rural Alabama three years before the 1995 heat wave. She was among the fortunate in her South Side neighborhood to have air conditioning in her home. As the heat grew more dire, she watched a dozen window-unit air conditioners being stolen from a high school across the street.

"I don’t think the poverty situation has changed much," she said in a telephone interview. "It may be different people [than in 1995], but their economic status is no different."

Plus, she added, many low-income people will not leave their homes, even during an extreme heat event, because they fear their homes will be burglarized or otherwise damaged. COVID-19 has made it even more difficult to convince people to use cooling centers.

"Some will go to relatives who have air conditioning for a period of time. Others know they should go to a shelter or cooling center, but they just don’t. They don’t want to think about how their lives are at risk until it’s too late."

Horton, the Northwestern climate scientist, said: "I can make a qualified guess that people in disadvantaged communities are going to be more impacted by these events than people who are well off. Simply affording an air conditioner or a box fan is a luxury many people don’t have."

"Most of our really bad air quality occurs in the summer, just as we see these thermal events that cause humid air masses to sit on top of us for days," said Learner of ELPC.

So far, those conditions haven’t collided in the same tragic way they did 25 years ago.

"The trend lines all indicate that heat waves are becoming more frequent and relative humidity is going up," Horton said. "Eventually, these conditions will come together. That’s when we’re going to see how far we’ve come."