8 energy and environment numbers to watch on the Hill 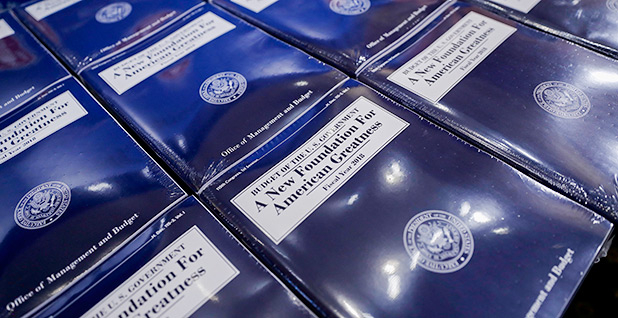 Filling 1,760 pages and spread over four volumes, the fiscal 2018 budget released yesterday can seem a confusing jumble of thousands of line items that somehow add up to its $4.1 trillion total. But those figures do matter, as they will shape the spending fights expected to consume Capitol Hill for the rest of this year.

Here are eight numbers worth watching as those battles play out on energy and environmental issues:

Much has been made about the Trump administration’s proposal to cut U.S. EPA by 31 percent, but the more important figure and one that both parties may cite is that the reduction would eliminate about 3,800 jobs at the agency. It’s an easily understood number that offers advantages to both parties in appealing to their supporters. Republicans can claim they are cutting "thousands" of regulatory bureaucrats while Democrats will warn that environmental protection and conservation workers would be axed.

Expect the White House to cite this figure frequently in making its case for how much money it would save by selling off half of the nation’s Strategic Petroleum Reserve over the next decade. Conservatives will use the savings to deflect questions that opponents of the change are likely to raise about how a sell-off would affect global oil prices and long-standing international oil reserve requirements.

That’s the size of the Arctic National Wildlife Refuge. The Trump administration wants to open up about 1.4 million acres to oil and gas drilling over the next decade. Backers, led by Senate Energy and Natural Resources Chairwoman Lisa Murkowski (R-Alaska), will tout the $1.8 billion in revenue the Interior Department would collect by leasing out the land for energy exploration. But Democrats and greens will cite the remarkable size of the pristine wilderness — it’s bigger than eight states — to argue for its preservation. About 9 million of the 19 million is already wilderness, and President Obama recommended the rest be designated as wilderness in 2015.

Supporters of the Energy Department’s Office of Energy Efficiency and Renewable Energy will say $636 million in proposed spending for fiscal 2018 would not be enough money to carry out its operations, which currently are funded at more than $2 billion. The office oversees one of DOE’s biggest regulatory functions — efficiency standards for buildings and appliances — and supports research in wind, solar, geothermal and other clean energy technologies. The proposed two-thirds cut will likely face pushback on Capitol Hill as some Republicans have warned against reducing those research programs.

Republicans will be eager to tout what the White House is calling a $1 trillion investment over 10 years in politically popular infrastructure programs. But Democrats are certain to point out that only $200 million is proposed directly for federal spending on new roads, bridges, airports, railways and other projects. They’ll note the administration is also counting in that figure economic returns it expects from regulatory actions aimed at generating revenue, like support for the Keystone XL pipeline.

The Nuclear Regulatory Commission is seeking funding for 71 of its workers to address more than 300 contested issues related to the Yucca Mountain nuclear waste repository project in Nevada before issuing a final decision on the license. It marks the first time, since 2011, the NRC has requested money — $30 million from the Nuclear Waste Fund — to support work on the repository. The project is likely to face fewer political obstacles in Congress this year with its chief opponent, Sen. Harry Reid (D-Nev.), now retired.

Asked to defend steep cuts in climate spending, Office of Management and Budget Director Mick Mulvaney yesterday cited $700,000 in federal money that he claims was wasted on a musical to promote global warming. For years, conservatives have used the example of the 2014 National Science Foundation grant for the educational show to make the case that climate dollars can be trimmed at agencies from EPA to the National Oceanic and Atmospheric Administration. Democrats will counter it’s ridiculous to compare the grant to the hundreds of millions of dollars in climate programs facing the budget ax.

Perhaps the most important budget number is not in the fiscal blueprint but is rather the number of seats Republicans control in the Senate. With a narrow GOP majority, Democrats can unite to filibuster any spending bill because Republicans would lack the 60 votes to end it. In that sense, the fiscal 2018 spending bills won’t be set by budgeteers at OMB but decided by appropriators in the Senate.