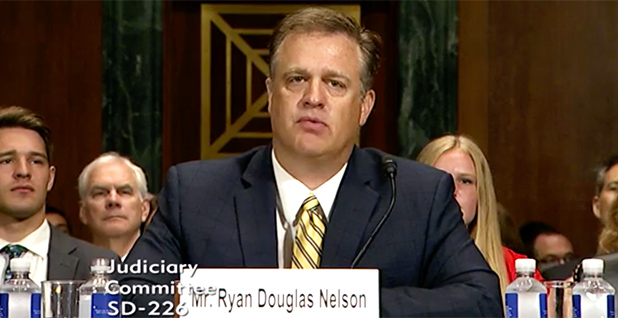 A nominee for an influential court in environmental law yesterday told senators he believed climate change was occurring but was coy about how much he thought humans were to blame.

"I am not a scientist in that area, but I do agree, based on the knowledge that I have, that human activity has contributed," Ryan Nelson said. "To what degree, I don’t think I’m prepared to answer."

President Trump has nominated Nelson to serve on the 9th U.S. Circuit Court of Appeals, the largest circuit court by both geography and population.

The court in the West typically hears a lot of environmental litigation because of the vast amount of public land within its purview.

Nelson is no stranger to environmental law: From 2006 to 2008, he served as deputy assistant attorney general in the Justice Department’s Environment and Natural Resources Division, where he argued cases in front of circuit courts and participated in briefs in front of the Supreme Court.

He had been one of several Interior nominees, however, whose confirmation was held up by Democratic senators. In May, Trump tapped Nelson for the 9th Circuit post and withdrew him from the Interior job (Greenwire, May 10).

Climate change rarely features in judicial confirmation hearings, but Sen. Kamala Harris (D-Calif.) made it the centerpiece of her questions to Nelson.

"The 9th Circuit covers a large area of this country that is occupied by natural resources, and therefore the cases you will hear, many of them will probably involve environmental law," Harris said before asking Nelson for his views.

Nelson said he would want to "look at the full record" in a specific case before making a "broader pronouncement" on the drivers of climate change.

Pressed further by Harris, he added that he believed the Obama administration went through a "robust process" before EPA issued its so-called endangerment finding in 2009, which found that greenhouse gases endangered public health and welfare.

"I trust the lawyers and other staff at EPA to try and do their job as appropriately as possible," Nelson said. He added that he wouldn’t "weigh in on any substantive matter on whether they got it right or wrong."

In a later exchange with Sen. Mazie Hirono (D-Hawaii), Nelson said he generally did not believe that environmental laws should be narrowly read.

But Hirono said she was concerned that "plain language" was code for taking a more restrictive view of environmental protections. She asked Nelson about his involvement in a 2007 Supreme Court case in which the Bush administration advocated for a narrower reading of the Endangered Species Act.

Nelson pledged to follow Supreme Court precedent in environmental litigation. He noted that there are instances where the court has adopted "a more robust reading" of environmental laws.

"Many of the environmental laws were passed several decades ago and could stand to be updated with greater clarity," Nelson said. "In the absence of that clarity, I think the courts are doing the best they can."

Bennett, who had received praise from both of Hawaii’s Democratic senators, easily passed the Senate in a 72-27 vote.