A battle victory for coal unions facing an energy war 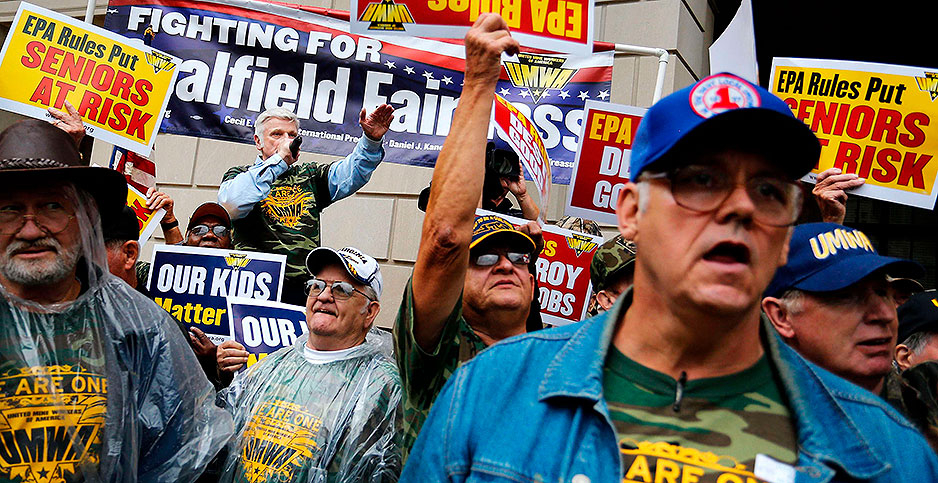 The United Mine Workers of America, led by President Cecil Roberts (top, with microphone), rally outside EPA in 2014. Jonathan Ernst/REUTERS/Newscom

The United Mine Workers of America just scored a major victory on Capitol Hill.

A provision nestled in the year-end spending deal guaranteed pension and health care benefits to more than 100,000 coal miners and their families (Greenwire, Dec. 16, 2019).

President Trump’s signature on the legislation ended a decade of union retirees swarming Washington to fend off fiscal hawks and powerful conservative groups that saw no reason to single out coal miners from the rest of the nation’s troubled multiemployer pension funds.

"People in camouflage shirts have out-lobbied those in $10,000 suits over the past 10 years," UMWA President Cecil Roberts said in his year-end message.

"Your pensions are secure; your health care is secure," he said. "Congratulations."

What is not secure, though, are the jobs of the less than 8,000 active UMWA miners.

Once 500,000 strong in the 1930s, the UMWA now represents 15% of the nation’s 54,000 coal miners. That workforce is shrinking as rival fuels dismantle King Coal, despite Trump’s promises to the contrary.

"Coal mining is on the decline, and anybody that tries to deny that is not being honest," Roberts said in an interview.

Once a dominant regional force, the union has faded from the political arena, and its membership has grown smaller and older (Greenwire, April 17, 2017).

But the pension and health care victory demonstrates camouflage still has clout in the corridors of power. The UMWA still sees itself as "the shock troops of the American labor movement."

When the first miner pension and health plans were created in 1946, the UMWA represented virtually the entire coal industry.

A national coal strike — the largest in American history, at 400,000 workers — had forced President Truman to step in and nationalize the country’s coal mines to preserve the post-war economic boom.

The resulting National Bituminous Coal Wage Agreement not only created miner retiree benefit programs, but the UMWA says it constituted a "promise" to federally guarantee them — a point disputed by the right-wing Heritage Foundation.

But the so-called Krug-Lewis agreement could not stop mechanization from slicing the country’s coal workforce in half over the coming decades. Production grew, but employment cratered as machines and conveyor belts replaced picks and mules.

Still, most mining jobs stayed union. Union membership tracked with total industry employment until the start of the 21st century.

Between 2000 and 2011, coal production spiked to an all-time high. During that period, the overall workforce grew accordingly, but the percentage of unionized miners shrank by nearly 15%, according to the U.S. Energy Information Administration.

Roberts blames politicians. In 1990, Congress amended the Clean Air Act to fight acid rain, driving power plants to seek out low-sulfur coal found in the West. By 1999, the majority of U.S. coal was mined west of the Mississippi River — in places lacking union tradition and dominated by massive surface mines requiring fewer workers.

Back in Appalachia, coal barons waged a political war on union clout. At the forefront was former Massey Energy Co. CEO Don Blankenship, an avowed union buster who later spent a year in prison for conspiring to violate mine safety laws and is now trying to clear his name as a presidential candidate (Greenwire, Nov. 12, 2019).

"The laws in this country are not very favorable to workers who want to have representation in their workplace," Roberts said.

After the 2011 apex, coal production collapsed. As a result, nearly half of American miners have lost their jobs.

Unionization, however, held steady, hovering around 20% of the industry from 2011 to 2018, according to EIA. (Nearly 2,800 workers belonged to unions besides the UMWA.)

While it pales in comparison to historic levels, Roberts argued coal unions still represent more workers than other industries.

The UMWA sees a way to bolster its ranks by offering miners an advocate who can help them hold on to their jobs in a besieged industry.

As proof, the union points to the recent epidemic of coal company bankruptcies.

Bankruptcy has resulted in closed mines and layoffs, but when mines stayed open, union members generally held on to their jobs. Then, legislation preserved their pensions and health care.

"That’s the difference between working in a union operation and a non-union," Roberts said.

Either way, former Kentucky Coal Association President Bill Bissett argued coal’s downturn has robbed unions of leverage. With too little demand and too many mines, a strike could just simplify decisions on what to cut.

"Not producing coal right now might be a pretty good idea for some of these companies, if they can hold their breath to do it," said Bissett, who now leads the Huntington Regional Chamber of Commerce in West Virginia.

‘Figure something out quickly’

Trump promised to put the industry back to work, but coal employment has at best stabilized despite rollbacks of various Obama-era regulations.

At the end of 2018, the UMWA had 60,375 members and only a few thousand active coal miners. Most are retirees, but others are cops, prison guards, truck drivers and health care workers.

"There are literally millions of workers in this country, many of them living in Appalachia, who have jobs that don’t … have the benefits they need to sustain their families," Roberts said.

As a selling point, the UWMA can now point to its fight for pensions and health care.

"Even though you might be the most anti-union person in the world, you have to have respect for that," Roberts said.

But new members spark the same old opposition, even in West Virginia, the heart of the UMWA.

"You’ll be handing a portion of your paycheck over to a group that is focused on its own survival and political goals that likely do not match your own," Bissett wrote in a Huntington Herald-Dispatch op-ed when the UMWA started unionizing local first responders.

Politically, the UMWA painted Appalachia blue for the better part of a century, but Democrats’ stranglehold faded alongside the union. Local politicians found themselves isolated as the national party soured on coal. West Virginia has not supported a Democrat for president since 2000.

After sitting out the 2012 and 2016 presidential cycles, the UMWA might endorse a moderate like front-runner Joe Biden, Bissett said.

"But the membership are going to vote for Donald Trump," he said. "Period."

"The unions that depend on fossil fuel industries, from steelmaking to coal to autoworkers — all the things that we’re going to have to transition away from because of climate change — they’re going to defend the interests of fossil fuels, if for no other reason than self-preservation," Keeney said.

Bridging the divide between environmentalists and industrial workers is not impossible, Keeney said. West Virginia Democratic Sen. Joe Manchin won reelection over his Trump-backed Republican opponent, Patrick Morrissey, by focusing on coal workers, not regulations. But Democrats have yet to coalesce, Keeney added, around a message that can win key states like Pennsylvania, Michigan and Wisconsin.

"If Democrats don’t win the Rust Belt back … Trump will be in the White House again," he said. "So they better figure something out quickly."

The olive branch that Democrats offer Appalachia is what activists call a "just transition." On the campaign trail, Biden has repeated the well-worn idea of retraining miners to work with computers.

Decades of that rhetoric and millions of dollars in federal funding, however, have not created a viable alternative to coal.

"Why don’t we just say we’re going to do away with your jobs and you’re going to have to have two jobs for the jobs you have now," he said.

The UMWA never disputed climate change, but Roberts argues that eliminating U.S. coal will not solve the problem of a world consuming more of the black rock than ever (Energywire, Dec. 17, 2019).

"We need to develop technology to remove carbon from the burning of coal, or you’re never — write that word down — never going to resolve climate change," Roberts said.

Others say solar and wind offer a reprieve from the boom-and-bust cycle of extraction and health impacts like black lung disease.

"While your salary may not be as much, you’re also not going to have all the costs," Keeney said.

"They’ve done about as well as they can under the circumstances," he said.

The UMWA can play a vital role in teaching the next generation about the rights a union can offer to workers at Amazon.com Inc. and Walmart Inc. and around the world, said Keeney. The union recently donated to the West Virginia Mine Wars Museum, which Keeney helps run in Matewan.

"If the UMWA is successful in promoting its legacy," he said, "then it can still have an impact."

With retirees now secure, the union plans to pressure the Trump administration to impose emergency restrictions on silica dust linked to the dramatic spike in black lung disease (Greenwire, Nov. 27, 2019).