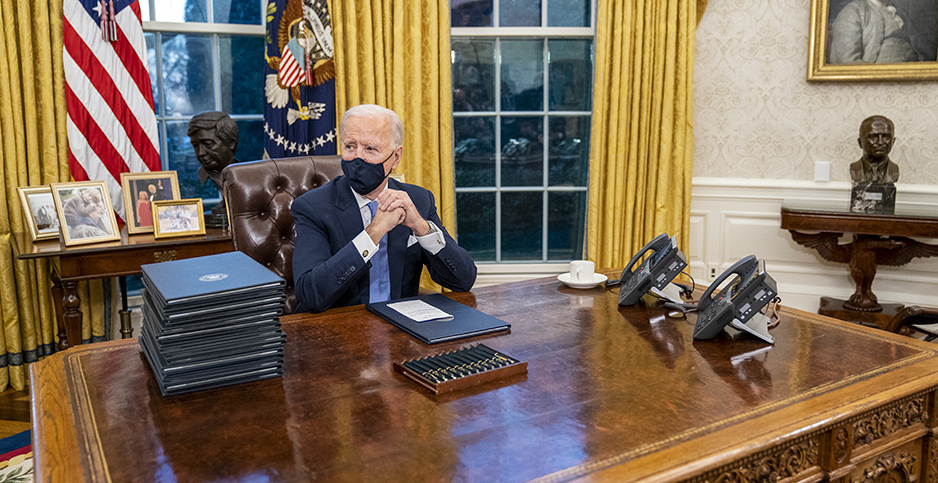 President Biden prepares to sign executive orders on his first day in office. A flood provision within a climate order is considered obsolete. Pool/CNP/InStar/Cover Images/Newscom

On his first day in office, President Biden signed an executive order reinstating a flood protection policy that former President Trump had revoked.

At least that’s what Biden thought his order did.

The White House told climate advocates recently that Biden’s order did not accomplish what the president intended and that Trump’s revocation remains in effect, leaving federal agencies without a mandate to incorporate climate change into new projects they fund.

"We heard from administration officials that the White House general counsel determined that reinstatement had not in fact occurred," Joel Scata, a water and climate attorney at the Natural Resources Defense Council, said in an interview.

It was not clear what made the White House decide the flood policy was not in effect. The White House press office did not respond to questions by E&E News.

The policy — the Federal Flood Risk Management Standard — was established in an executive order that former President Obama signed in 2015 requiring federally funded projects to be elevated 2 to 3 feet above projected flood levels or to have equivalent flood protection.

The order would have protected billions of dollars of federally funded projects such as subsidized housing, EPA-funded water and sewer plants, roads and bridges financed by the Department of Transportation, and infrastructure rebuilt with Federal Emergency Management Agency disaster funds.

It was considered a significant step in protecting taxpayer-financed projects from the increased flooding caused by rising seas, intensifying storms and other effects of climate change.

Trump revoked the order in 2017 before federal agencies could implement it.

Biden’s election made reinstating the flood standard a top priority of climate advocates, who said it would be an easy step to address climate change and signal the administration’s seriousness about the issue.

"We had put a lot of advocacy into that being reinstated," said Scata, who wrote a recent blog post about the White House determination that the policy was not actually in effect. "We had to come out and say we were wrong" about the flood policy having been reinstated, he said.

Confusion arose on Biden’s first day in office when he issued a sweeping, 3,400-word executive order addressing climate change, the environment and public health. One paragraph near the bottom said that Trump’s order revoking the flood standard was itself revoked.

As experts wondered whether the paragraph had reinstated the flood standard, a White House official told E&E News in late January that it had done exactly that.

"The revocation of 13807 reinstates the Jan. 30, 2015 EO," the White House official told E&E News in an email, referring to Trump’s order in 2017 and to Obama’s executive order that established the flood standard.

The official did not respond to an E&E News email sent Friday.

Without an official flood standard, "agencies aren’t moving forward with incorporating it into their regulations and operating procedures so they can decide how to make infrastructure resilient," Scata said.

The absence of a flood standard could be particularly concerning as the administration and Congress push to spend hundreds of billions of federal dollars on new infrastructure projects.

Scata said the White House is looking at ways to impose or renew the flood standard.

"I do know the White House is committed to ensuring future federal spending on infrastructure is resilient to climate change," Scata said. "I fully expect them to do something going forward now that there’s this problem."

Options include having Biden issue an executive order that says explicitly that the Obama-era flood standard is in effect, or writing a new order that incorporates updated information about flooding and climate change.

"This might be an opportunity to clarify and simplify some of the original provisions in FFRMS to strengthen it, especially now that information about sea-level rise is more substantiated," Scata said, using the abbreviation for the flood standard. "They could go further and make it a stronger standard if they can’t just reinstate it."