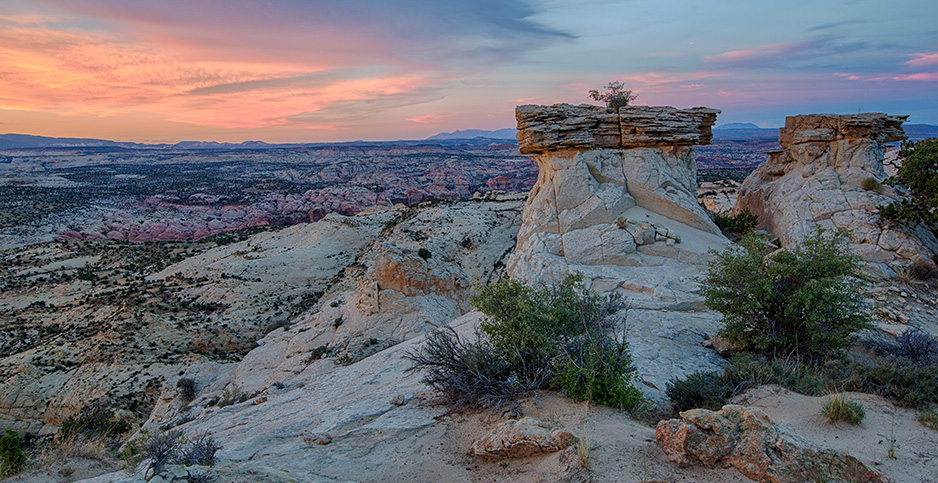 With the stroke of a pen — and maybe a pair of recycled presidential proclamations — more than 2 million acres of public lands in Utah could regain national monument status early next year.

"We are hopeful that will be one of the first actions of the Biden administration," said Scott Berry, who serves as vice president of the board of directors for Grand Staircase-Escalante Partners.

Berry continued: "In our view, the earlier the better because it does seem obviously like President Biden will be faced with a gigantic set of challenges and problems to address, so my hope is this is something fairly elegant he can do quickly to indicate a change of attitude in the White House."

In a pair of proclamations he signed during a ceremony at the Utah State Capitol building in Salt Lake City, Trump cut the Bears Ears monument to about 85% of its original 1.35 million acres and trimmed Grand Staircase-Escalante in half from its previous 1.9 million-acre footprint.

The action drew swift condemnation from Native American tribes and environmentalists, as well as multiple legal challenges still pending in the U.S. District Court for the District of Columbia.

But now opponents of the cuts say most, if not all, of the disputed federal lands could soon return to protected status.

The pledge is included in a "Biden-Harris Plan for Tribal Nations," outlining how the former vice president and his running mate, California Sen. Kamala Harris, will work with tribal governments.

But proponents of restoring the monuments acknowledged there are significant questions over how Biden could go about rescinding Trump’s cuts to the sites.

"I’m confident that he’s prepared to reverse these decisions, but I think it’s really important how this is done," said University of Colorado Law School professor Mark Squillace.

Squillace said Biden could, for example, use the original proclamation President Obama issued when he established the Bears Ears site in late 2016 and simply reset the site’s boundaries.

That action would allow Biden to act swiftly. But Squillace warned it could also suggest that Trump’s decision to shrink the site was equally valid.

"I think it would be a mistake to simply issue new proclamations," Squillace said.

That’s because opponents of the monument reductions — including Squillace, who filed an amicus brief in the federal lawsuit challenging Trump’s action on the Grand Staircase-Escalante monument — argue that the president exceeded his authority under the Antiquities Act of 1906 when he shrank the sites in late 2017.

While the law allows the president to establish national monuments to protect areas of cultural, scientific or historic interest, Squillace asserts only Congress can amend a monument’s boundaries.

The Trump administration has argued, however, that the law can also be used to reduce monuments if a president deems his predecessors exceeded a requirement to confine the monument to the "smallest area" possible (Greenwire, April 13).

Instead, Squillace said he would expect the Biden administration to first seek a formal opinion from either the solicitor general or the Office of Legal Counsel at the Justice Department about the legality of Trump’s reductions.

"We do need to resolve this question at some point to whether Trump had the authority to change the boundaries the way he did," Squillace said, noting that without an opinion, monuments could be subject to seeing their boundaries expand and contract whenever party control of the White House switches.

At the same time, the next Interior secretary could temporarily withdraw any of the disputed monument lands while that decision is prepared by DOJ.

"We are eager to have the protections restored," said Steve Bloch, legal director for the Southern Utah Wilderness Alliance.

"At the end of the day, what’s our expectation in Utah? As my Republican friends like to say, ‘Elections have consequences,’ and we absolutely expect that President Biden will restore these national monuments," he added.

But the dispute over the monuments could still potentially be resolved before Inauguration Day occurs Jan. 20, 2021 — regardless of who is standing at the podium.

Federal Judge Tanya Chutkan, an Obama appointee, is weighing arguments in consolidated cases targeting each of the two Utah sites.

Arguments and responses in both cases were completed as of early June, with the exception of a supplemental brief filed by Native American tribes in the Bears Ears monument lawsuit in late July (Greenwire, July 29).

That filing asked the court to consider the Supreme Court decision in McGirt v. Oklahoma, which found that millions of acres in Oklahoma remain part of Native American reservations for criminal law purposes.

Squillace noted that a court ruling against the Trump administration would nullify the need for any actions from a Biden-led DOJ.

"If the court were to strike down the Trump proclamation, then the boundaries would revert," he said. "That would be clean, you wouldn’t need a legal opinion, and you could just move on."

A favorable ruling would also negate any new mining claims or grazing contracts executed in either monument since the Trump proclamations took effect in late 2017.

Earlier this year, the Trump administration approved management plans for both monuments to expand drilling, mining and grazing on the previously protected acreages (Greenwire, Feb. 6).

While much of the dispute over previously protected lands has focused on whether coal could be mined in the former monument, to date boundary changes in Grand Staircase-Escalante have instead prompted a resurgence of alabaster mines. The gypsum stone is primarily used for artistic purposes.

Berry, of Grand Staircase-Escalante Partners, noted, however, that those alabaster mines are unlikely to overly complicate the monuments’ restoration.

"The good thing about those is they’re quite few and they’re quite small," Berry said, noting such mines may produce 10 tons of material each year. "I wish they weren’t there, but they’re not like a giant new coal mine."

Still, management plans for both monuments would also need to be reformed if the sites were restored to their previous footprints, said Bloch.

"At the end of the day, we expect a President Biden to restore these monuments, and part and parcel with that will be to manage them according to Biden [administration] proclamations — which means that lands would be closed to hardrock mining, new mineral leasing," Bloch said.

He suggested the Grand Staircase-Escalante monument, which was established by President Clinton in 1996, would revert to its previous 2000-era management plan. The Bears Ears site, reduced less than a year after its creation by President Obama, would have to start anew.

"It is my hope that the restoration of the original boundaries will bring some certainty back to how these places are meant to be managed and protected," Bloch said.

But monument advocates also argued for a need to prevent future cycles of expansion and contraction of the monuments.

"There are a number of paths that Congress could take," said Bloch, who represents SUWA in both federal lawsuits challenging the monument reductions. "They’re the ones that have the undisputed plenary power over the dispositions of the public lands."

That could include approving resolutions ratifying the boundaries of national monuments established since 1996, like S. 367, sponsored by New Mexico Sen. Tom Udall (D).

"Clearly, Congress intended to make the Antiquities Act a one-way ratchet: The president is only authorized to establish national monuments and not to destroy them," he said.

But a spokesman for House Natural Resource Chairman Raúl Grijalva said the Arizona Democrat is confident in the existing law and does not plan to seek changes to it.

Bishop, the panel’s top Republican lawmaker, has long advocated for overhauling the law, including limitations on the size of monuments and requirements for approvals from state and local officials (Greenwire, March 12, 2019).

"He has the ability to do it, the power to do it," Bishop acknowledged of the potential Biden administration, noting that he disagreed with the idea of reverting the monuments. "It’s unfortunate that Congress has written such a lousy piece of legislation."

Bishop argued that any restoration of the Bears Ears site would need to address grazing, a key economic activity in the area, as well as access to private roads and new rangers to protect important cultural and historic sites in the sprawling monument.

"The way it should be done is without using the Antiquities designation, which is severely flawed," Bishop said.

He added that Congress should handle new monument designations, pointing to a handful of sites the legislative branch has anointed in recent years like the Mills Springs Battlefield National Monument in Kentucky (Greenwire, Sept. 23).

"Congress needs to step up and take back the responsibility and do it the proper way," Bishop added.

While many advocates would be pleased if Biden restored the Bears Ears site to its original size, the Utah Diné Bikéyah’s board recently endorsed a resolution to expand the monument to 1.9 million acres.

Proponents say the expansion would add cultural sites and objects that failed to gain protections in the original proclamation.

Lee said the proposal is expected to be raised at an upcoming session of the Bears Ears Inter-Tribal Coalition, which represents the Hopi, Navajo, Ute, Ute Mountain Ute and Zuni tribes and was instrumental in pressing for the creation of the monument.

"We have a road map going forward for bringing these documents to the new president," said Lee, who is a registered Republican.