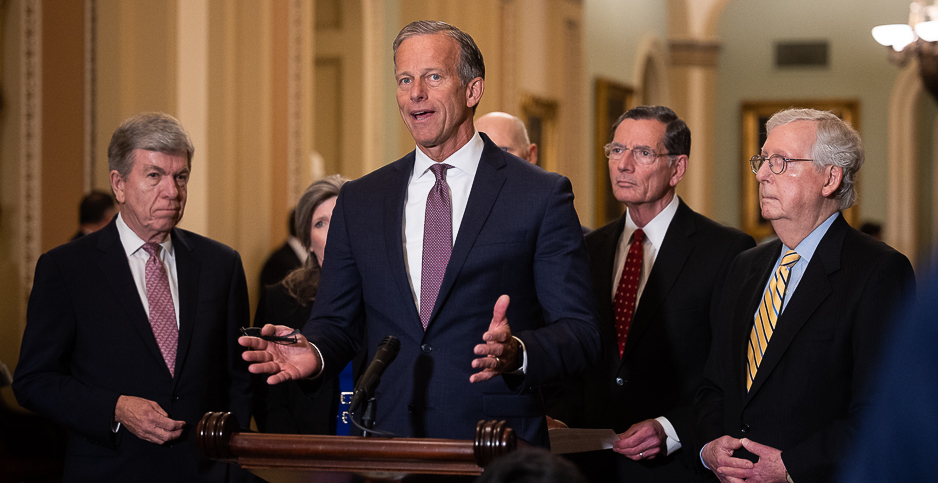 A bipartisan group of senators is struggling to find pay-fors to cover about $575 billion in new infrastructure spending acceptable to the White House, raising new doubts for the prospects of a breakthrough deal before the Senate departs at the end of the week for the July 4 recess.

Senators from both parties huddled yesterday with White House officials in the Capitol on the framework that was backed by 20 senators last week (E&E Daily, June 17).

Participants were tight-lipped about the discussion, but the White House has reportedly rejected a plan to index the federal gas tax for inflation, create new user fees for electric vehicles and repurpose COVID-19 relief funds.

"It’s gotten more complicated with the pay-fors," Senate Minority Whip John Thune (R-S.D.) told reporters. "There are a number of things that they had already kind of ditched previously. I think there is even a bigger hole now."

White House press secretary Jen Psaki reiterated Monday that indexing the gas tax and a vehicle-mile-traveled scheme are nonstarters given that they violate President Biden’s campaign pledge not to raise taxes on individuals making less than $400,000 a year.

She signaled some support for one pay-for put forward by the bipartisan group — boosting IRS enforcement of tax evasion, which she noted would generate "a great deal more by multiples of what the gas tax would raise."

"That is an area where we feel there should be an opportunity to move forward," Psaki said.

While the bipartisan group is expected to meet with White House negotiators again today, the amount that would be raised by boosting IRS enforcement is in dispute. The Congressional Budget Office says the actual revenues would be far less than what was hoped.

Furthermore, Thune said recent leaks of taxpayer data from the IRS has Republicans suspicious of empowering the agency with more resources to crack down on tax cheats.

"They’re not doing a good job of convincing people that they could do that," he told reporters yesterday.

In a statement yesterday, Psaki described the meeting as "productive" and indicated the group may meet again today.

But with the Senate set to leave town Friday for two weeks, patience is wearing thin among Democrats on both side of the Capitol for the bipartisan talks.

Senate Budget Chairman Bernie Sanders (I-Vt.), who is reportedly prepping a $6 trillion budget reconciliation package encompassing both Biden’s American Jobs Plan and American Families Plan, suggested yesterday that Congress should only pay for the proposed "social infrastructure" and simply add the "one-time" cost of physical infrastructure to the deficit.

"Interest rates now are at a historically low level, and I think we should take advantage of that and use those low-interest rates," Sanders told reporters, while also noting that pay-for decisions are up to the Finance Committee.

"We need to wrap those up," Hoyer told reporters. "We need to decide what in fact we’re going to do."

Meanwhile, momentum is building for including billions of dollars for abandoned mine and oil well cleanup in whatever infrastructure plan emerges.

An energy infrastructure plan introduced by Senate Energy and Natural Resources Chairman Joe Manchin (D-W.Va.) this week includes bipartisan legislation from Sens. Kevin Cramer (R-N.D.) and Ben Ray Luján (D-N.M.), S. 1076, that would spend about $4.6 billion on mine and oil well cleanup. It would do so mostly via state grants managed by the Interior Department (E&E Daily, April 13).

"It’s exactly our language," said Cramer, referring to the bill he introduced in April with Luján.

Their proposal would cover the cost of plugging the estimated 56,600 abandoned wells in the United States and create an estimated 13,500 jobs (see related story).

The emerging bipartisan infrastructure package proposes $16 billion for orphaned mine and well cleanup, according to the summary.

Cramer said it goes even further than his plan with Luján by proposing bonding reforms associated with well and mine cleanup.

"When you start adding things like bonding reform, it gets more complicated," said Cramer, who said he had yet to sign onto the bipartisan infrastructure plan mainly because of the bonding provisions.

Luján, though, said bonding provisions — which can hold well and mine operators accountable for cleanup — makes a lot of sense. He has also not signed onto broader bipartisan infrastructure legislation.