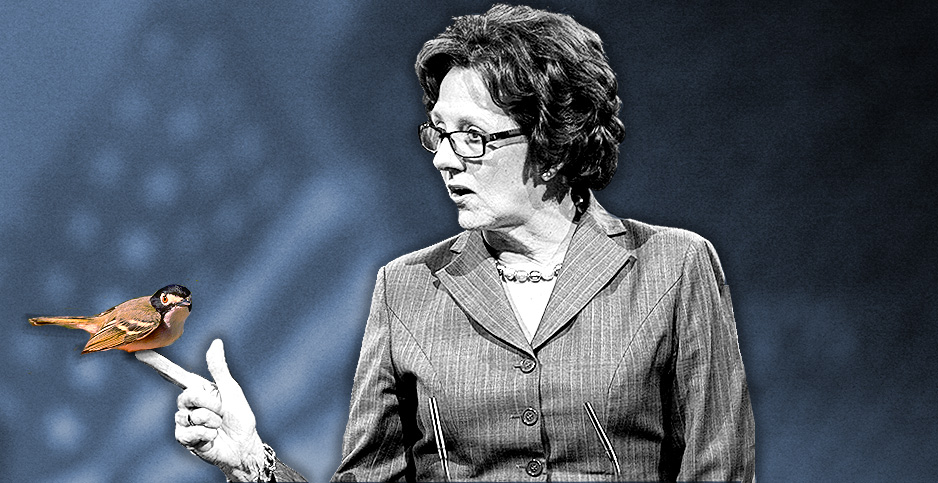 Interior Department official Susan Combs’ history with the black-capped vireo is about to thicken.

As a Texas state official, Combs once cited the bird as an example of how negotiated agreements rather than "additional regulations" can best protect vulnerable species.

A public comment period that ends tomorrow, while focused on a proposed post-delisting monitoring plan, has illuminated the more fundamental questions about the bird’s proper ESA status. Proponents of delisting say the bird no longer needs formal regulatory armor.

"The Service estimates that vireo localities with suitable breeding habitat to support 30 or more adult male vireos can be maintained through vegetation and brown-headed cowbird management," the 50-page FWS plan states.

In its earlier 2016 delisting proposal, the Fish and Wildlife Service reported that the bird’s estimated population has increased more than tenfold since the 1980s. Once found in four Oklahoma counties and 21 Texas counties, it now inhabits five counties in Oklahoma and 40 in Texas.

"The known populations of black-capped vireos are geographically spread widely across the species’ historical range and habitat types, ensuring that the global population is not singular and isolated," the FWS declared at the time.

But others fear prematurely removing the bird from its designation as an endangered species, a status it has held since 1987.

"The draft [plan] openly acknowledges the lack of funding and resources needed for implementation, which should be in place prior to a change in the species’ status," Austin, Texas’ Wildland Conservation Division warned.

Combs’ potential role in resolving this debate stems from her appointment last month as acting assistant Interior secretary for fish, wildlife and parks (Greenwire, March 30). She had been serving as a special adviser to Interior Secretary Ryan Zinke while awaiting Senate action on her nomination to be assistant secretary for policy, management and budget.

"Combs is highly qualified, and we are more than confident that she will be an effective manager at Fish and Wildlife and Parks while she patiently awaits her Senate confirmation," Interior spokeswoman Heather Swift said.

A former state comptroller and agriculture commissioner, Combs was favorably reported out by the Senate Energy and Natural Resources Committee last August, but then saw her nomination for the policy and budget position stall.

President Trump renominated her Jan. 8, and the Senate committee again reported her out favorably Jan. 30.

During what appeared to be her straightforward confirmation hearing last July, Combs recalled how she worked as a state official with counterparts from the Army and other agencies to protect the golden-cheeked warbler and the black-capped vireo found at Fort Hood.

"This project made it clear that a cooperative approach to a common goal could indeed produce good results for all participants, and it is the approach that continually I strive for," Combs testified.

As a visiting senior fellow at the conservative Texas Public Policy Foundation, Combs similarly claimed the black-capped vireo agreement as a success, albeit in a commentary piece highly critical of the ESA.

"Left unchecked, the White House will keep turning the regulatory thumbscrews across a whole array of sectors, including one I know all too well — the Endangered Species Act," Combs wrote in 2015, adding that the law was "expanded to encroach on the private property rights of millions of Americans through additional regulations, rules and opaque interpretations."

That same year, Combs and the Texas Public Policy Foundation joined in a petition to remove the golden-cheeked warbler from ESA protections. The Fish and Wildlife Service rejected the petition in 2016, prompting a lawsuit that’s still ongoing.