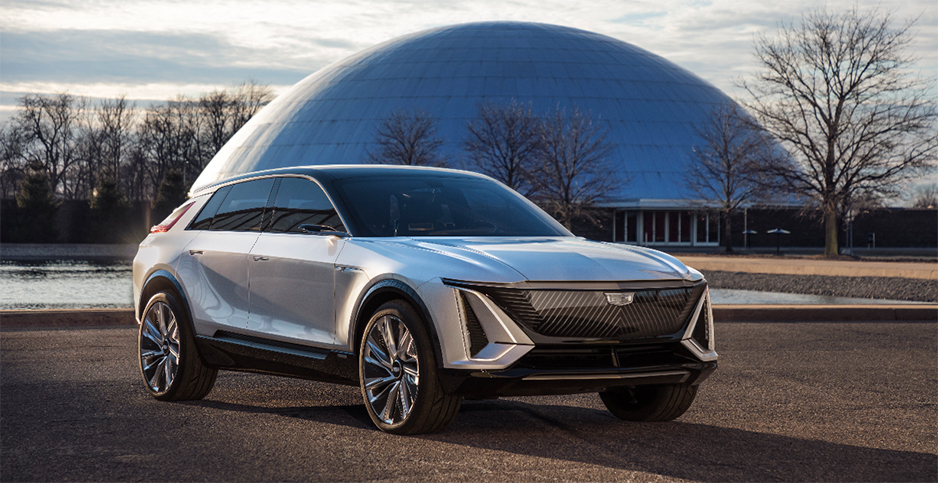 Last night, the slipcover came off the Cadillac Lyriq, the first electric luxury car to be introduced by a traditional American automaker. It is targeted straight at the taillights of Tesla Inc.

While enthusiasts debate the merits of the Lyriq’s 300-plus-mile driving range, its slide-away charging portal, its abundant video screens and the smiley face front grille, a larger question looms: Can General Motors Co., or any traditional automaker, compete against the leader in EVs?

Tesla was never mentioned in the presentation from GM’s Design Dome in Warren, Mich. The star was the Lyriq, an SUV with a long hood and tapered tail that is a cornerstone of GM’s electric ambitions.

"Led by Lyriq, Cadillac will redefine American luxury over the next decade with a new portfolio of transformative EVs," said Steve Carlisle, the president of GM North America.

But GM’s electric rival was clearly on executives’ minds. How GM and other major carmakers compete with Tesla on range and price is a matter of high, even existential, stakes in the auto industry, depending on how regulators, automakers and drivers shape the auto market in the next decade.

Some experts think that traditional automakers can use their deep pockets, expertise and hustle to put Tesla in its place and create a profitable business making EVs.

Others think they are doomed.

One one side are auto experts like Alexandre Marian, of consultancy AlixPartners, who says the fact that global automakers didn’t step back from spending billions of dollars on their EV plans amid the coronavirus crisis is a sign that they are taking EVs very seriously.

"They have been really thinking through their approaches on powertrain and on the battery," he said.

On the other are die-hard Tesla converts like Matt Joyce, a part-time auto analyst who thinks that Tesla’s years of lead time on perfecting EVs — along with its exclusive charging network, its self-driving capabilities and more efficient factories — position Tesla as an insurmountable force as the globe turns toward EVs.

"You look at the difference in value proposition here, and you realize it doesn’t have a shot at competing," he said. "Who in their right mind is going to choose the Lyriq?"

Last night was the Lyriq’s turn to shine, and it’s one of the most concrete signs of the year that traditional automakers are getting closer to turning their expensive electrification blueprints into actual vehicles.

The new Cadillac’s other innovations are also playing Tesla catch-up. They include over-the-air updates to the vehicle software as well as Super Cruise, GM’s new self-driving suite that makes possible hands-free lane changes.

The price of the vehicle, due to start production in late 2022, was not revealed.

Since 2016, GM has had only one pure-electric car, the Chevrolet Bolt.

That will change with its new electric Hummer truck and SUV, due in late 2021, and the Lyriq, which is the start of converting the storied Cadillac brand to all-electric luxury cars. The Lyriq will compete in an increasingly crowded segment against not just Tesla, but other models like the Audi e-tron and the Jaguar I-PACE.

The vehicles are only one endpoint of the $20 billion GM plans to spend on EVs between now and 2025. Its new battery factory, co-created with Korean battery supplier LG Chem, is going up in Michigan, and last week, it announced that it would build 2,700 charging stations nationwide with charging provider EVgo (Greenwire, July 31).

Ford Motor Co., Volkswagen AG and a panoply of other automakers will collectively introduce at least 75 new electric models this year, Marian said.

Because the Lyriq’s price and driving range aren’t clear and its release date is so far in the future, it’s an inexact science to compare it with Tesla’s offerings.

The Lyriq’s arrival in showrooms is still at least two years away, which highlights another problem for other automakers. It is taking them significant time to design their EVs and convert factories to EV production. In the meantime, Tesla is selling EVs by the hundreds of thousands.

The Lyriq will be one of the first vehicles to use GM’s new Ultium battery. By the time it is ready, Tesla could be producing thousands of additional electric vehicles each month from new factories in Berlin and in Austin, Texas, along with the ones it is already operating in Fremont, Calif., and Shanghai.

Adding to the uncertainty is that traditional automakers’ promise of EVs is so often a promise deferred.

"I think back to five years ago, when I would say the other OEMs [original equipment manufacturers] will catch up and Tesla will face stiff competition," said Nick Nigro, the founder of Atlas Public Policy, which watches EV developments closely. "Here it is in 2020, and we’re still waiting for the OEMs to catch up."

The question is whether Tesla’s current, overwhelming lead in market share for EVs will continue to hold as other automakers introduce their models.

In the first half of this year, Tesla globally sold 28% of all EVs around the globe. Those 179,000 cars are a larger percentage than the other top three combined, which comprised Nissan Motor Co., Volkswagen AG and BYD Co., according to data from the website EV Sales.

In the United States, where fewer EV models are available because government auto emissions regulations and incentives are more lax, Tesla’s lead is even more pronounced. Last year, Tesla sold 60% of all EVs, according to Bloomberg New Energy Finance.

Even if Tesla maintains an overwhelming lead, it’s possible that other automakers will do just fine as they roll out and scale up competing EVs.

"It’s likely a growing market," Nigro said. "It’s possible that Tesla will continue its market dominance, but the pie will be getting bigger."

But it is also possible that the efficiencies that Tesla has wrung from its 17 years of making EVs, and only EVs, will make competing with it extraordinarily difficult and painful.

That is the thinking of Joyce, who, like many Tesla aficionados, is still wedging himself into work as an auto analyst. It is something he does in his spare time when he’s not engaged in the family business selling a line of Lebanese garlic dips.

Tesla’s key EV advantage, in Joyce’s view, is that it is able to move the car farther, with less weight and kilowattage of battery, than the competitors.

Because Tesla’s battery use is more efficient, it can offer higher range than its competitors. In fact, Tesla’s cars can go several dozen miles farther than other EVs these days. Since Tesla makes more batteries, it can make them more cheaply.

To compete on range, other automakers need to use more battery — adding weight and raising the car’s sticker price — or they need to absorb far more of the cost themselves, which means they lose money on every EV they sell.

"That has a huge negative impact, and it compounds," Joyce said. The legacy automakers, he added, "are between a rock and a hard place."

Audi may have landed in just such a hard place this week, when it announced it would add 18 miles of driving range to the 2021 e-tron — while lowering its price by $9,000.

Other observers, like Marian, the AlixPartners analyst, believe that costs for batteries are dropping across the board and that shiny new entrants like the Cadillac Lyriq might end up closer to parity with Tesla than it might first seem.

"Is Tesla difficult to catch? Yes," he said. "Is it impossible? I would not necessarily say it’s a done deal."