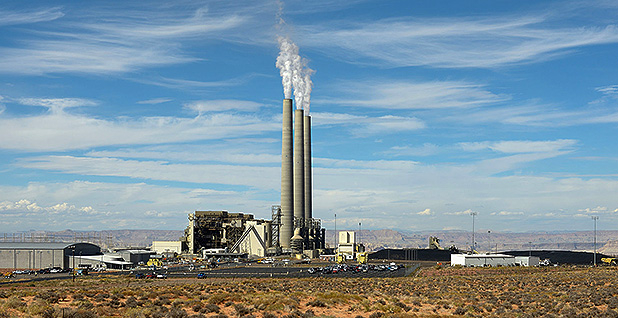 A major coal company had plans to save one of the West’s largest coal plants from closing. It just needed help from the Trump administration.

So in September 2017, Peabody Energy Corp. sent the Interior Department a game plan for keeping the 2,100-megawatt coal-burning behemoth in Arizona rumbling. The company’s mine supplies coal to the plant.

Included on the coal company’s wish list was eliminating environmental requirements for reducing haze. Peabody also asked the government to push the plant’s largest customer to continue buying its electricity instead of renewable energy. Together, that could help prevent the plant from shuttering years ahead of schedule, the company told administration officials.

"I think these are reasonable requests that don’t put us at risk," Scott J. Cameron, Interior’s principal deputy assistant secretary for policy, management and budget, wrote in a September email to his boss, Assistant Deputy Secretary James Cason.

The power plant, which sits on a high desert plateau on Navajo lands near the mouth of the Grand Canyon in northern Arizona, has emerged as a symbol of the Trump administration’s promise to revive the coal industry.

The plant’s fate might have been sealed if not for the federal government. The Bureau of Reclamation owns a 24 percent share in the plant, and Interior Secretary Ryan Zinke has made personal appeals to keep it open (Climatewire, April 13, 2017).

Federal officials soon threw their weight behind Peabody’s requests. The email from Cameron to Cason, on Sept. 11, 2017, included a 12-item list under the heading "NGS-Related asks of DOI from Peabody and Lazard," the coal company’s consulting firm.

Two items concerned the Central Arizona Water Conservation District (CAWCD), the power plant’s single largest customer. The water district was readying a plan to reduce its reliance on NGS and buy more renewable energy. Peabody asked Interior to press the water district to continue buying the plant’s power instead of ramping up its renewable energy use.

The argument closely mirrored Peabody’s request. The administration and Peabody contend that Congress intended the water district to buy NGS electricity when it signed off in 1968 on the creation of the aqueduct system, which delivers water from the Colorado River to Phoenix and Tucson. NGS has long powered the pumps that move the water across the desert.

When an Interior spokeswoman was asked whether Petty wrote the letter at Peabody’s behest, she responded "no" and did not elaborate.

She did offer comment about Interior’s general involvement in the dispute.

The water district, which says it can get cheaper power from other sources, ignored Interior’s warning and signed the renewable contract (Climatewire, June 8).

Former EPA Administrator Scott Pruitt weighed in a month later in a letter to George Bilicic, a Lazard Frères & Co. LLC consultant working on behalf of Peabody. A new owner would not be subject to the environmental controls called for by the plant’s existing air quality permit, Pruitt wrote, provided that the facility did not violate its NOx emissions cap.

"One thing is for sure, we need an extraordinarily high level of alignment and collaboration between Navajo Nation, the U.S. Government, Peabody and the state of Arizona," he said. "If these parties can’t come together in a spirit of cooperation, determination and fairness, NGS will not operate beyond 2019."

The St. Louis-based company has a lot to lose if the generating station closes. The coal company operates the Kayenta mine on Navajo and Hopi lands. The power plant is the mine’s only customer. Kayenta accounted for almost 4 percent of Peabody’s U.S. coal production in 2017, according to company documents.

Peabody has criticized the utilities’ decision to close the plant, saying its retirement would leave Arizona overly reliant on natural gas and jeopardize the future of the CAWCD. It also says that shuttering the plant could destroy the Navajo and Hopi economies, which are heavily intertwined with coal mining.

A Peabody spokeswoman said the emails showed the attempts of its consultants to gather information about the plant’s operations as they prepared to market the facility to perspective buyers.

The outcomes of other Peabody requests were more difficult to discern. Company executive Shepherd wrote in his email to Cameron, the Interior official, that closing NGS would be "premature." He seemed to reference the Energy Department’s effort to implement a plan to subsidize coal plants that store fuel on-site.

DOE’s subsidy plan was rejected by the Federal Energy Regulatory Commission earlier this year. The agency has since embarked on a new rescue plan for struggling coal plants, arguing that their retirement poses a national security threat.

Many of Peabody’s requests focus on the Salt River Project (SRP), the Arizona plant’s operator and majority owner. Peabody urged Interior officials to ask the utility not to transfer employees away from NGS, to continue maintenance and to avoid saying discouraging things about the facility to prospective buyers.

"On the cooperation point, however, importantly, we just don’t see SRP as being enthusiastic about working on a successful transfer here and we otherwise think there needs to be a discipline and sense of urgency applied to the process," Bilicic, the Lazard consultant, wrote to Cameron in September.

It remains unclear whether the plant will be sold. Peabody’s efforts have helped draw the interest of Middle River Power. The Illinois-based private equity company has said it’s exploring plans to purchase the plant and recently announced that it was negotiating with the Navajo Nation over a potential lease.

While Navajo leadership is supportive of efforts to keep the plant open, potential sticking points abound. Much of Peabody’s game plan for keeping the plant open focuses on reducing costs. But it is unclear whether the Navajo would agree to lower lease payments that might be needed to reduce its operating costs.

"Any deal where we get a lower lease payment, it’s probably not going to work," said Jackson Brossy, who leads the Navajo Nation’s Washington office. "The Navajo president is looking out for the Navajo people now and for 50 years."