A creek, some limos and Trump’s love of eminent domain 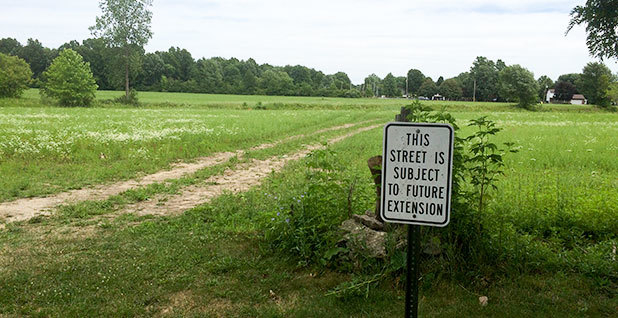 This field in Avon, Ohio, was acquired through eminent domain. Neighbors say floodwaters were 4 feet deep during a storm in 2014. Photo by Evan Lehmann.

As eminent domain was finding a surprising advocate in Trump during the primary battles last spring, local officials here were finalizing an unusual case that relied on the legal tool to take 57 acres from a real estate developer who was planning to build 49 houses in a large, weed-filled field that’s prone to flooding.

Town leaders described it as a victory that could prevent worsening inundation in the neighborhoods surrounding the open field, which is crosscut by muddy French Creek. Water poured from the field onto nearby roads and into basements after an intense rainfall in 2014, worrying neighbors that flooding could get worse if the proposed development deprived the area of a natural basin.

"You actually saw fish swimming across the street," said Angela Dunlap, whose home looks over the field.

Her partner, Kenny Urig, stood shirtless in their front yard Sunday and swung his arm in a circular arc to show how the floodwater had ringed their home like a moat.

Then he pointed to an overgrown construction site over the road.

"That field was full of water," he said. "You take that area and build it all up, and where’s all that water gonna go?"

The case ended in March when city officials agreed to pay the developer, Matt Garland, $2.35 million for the parcel of land. He originally purchased it for $1.5 million. It came as Trump was surprising conservatives with his strong defense of eminent domain for commercial projects, a position that seemed to run counter to GOP principles around limited government.

That angered some conservative groups. The Club for Growth, which pressures politicians to abide by free-market values, launched a television ad last October in Iowa attacking Trump for supporting policies that take land from citizens in order to "give it to corporations."

"Trump supports eminent domain — using government power to take ordinary people’s property so people like him can make more money," said the video, which was released just before the New York primary contest in April.

To some Republicans, Trump’s views represented what could be a damaging blow to his candidacy. News reports surfaced that he had sought to force an elderly widow, Vera Coking, from her longtime home next to Trump Plaza in Atlantic City, N.J., to build a parking lot for limousines serving the hotel’s guests. When she refused to sell, Trump turned to the New Jersey Casino Reinvestment Development Authority to pursue eminent domain.

"I still think if you put an ad out in Iowa and say he used the government to take away a widow’s house so he could build a parking lot for limousines, that could be effective," David Boaz, executive vice president of the libertarian Cato Institute, told The Washington Post in a story whose headline questioned whether Trump’s use of the process could "haunt him" with voters.

It didn’t hurt him in the primaries, even though eminent domain is widely unpopular.

Many here not ‘sold on’ climate change

Its reputation suffered even more after the Supreme Court reaffirmed in 2005 that the process could be used to advance urban redevelopment as long as it’s in the public’s interest. It has historically been used for obtaining myriad properties while constructing highways, railroads and pipelines. The court ruling emphasized that developers like Trump could ask public entities to help them find land for profitable projects.

The public’s dislike of eminent domain has crept into the discussion around climate adaptation. After Superstorm Sandy, some voices within New York Gov. Andrew Cuomo’s (D) administration suggested using the process to help vacate areas that are vulnerable to the impacts of sea-level rise, like storm surge, said John Echeverria, an expert on land use and climate change at Vermont Law School.

The idea was rejected. But Echeverria says it could be a useful tool to complement voluntary buyout programs that seek to clear floodplains of repeatedly damaged homes. Buyouts often fail to remove all residents, meaning that municipalities have to maintain emergency services to protect vulnerable populations.

"If retreat is inevitable, and if retreat should be organized, then the next logical step [of] eminent domain is probably going to play a role in effectuating retreat," Echeverria said. "But I think policymakers are just loath to embrace that possibility."

That wasn’t the case in this city. Avon is about 15 miles west of Cleveland, ground zero for Republican politics this week, and is seeing a rise in flooding as green space is developed in and around town, says Avon Mayor Bryan Jensen.

The seized area will be made into a park with basins that can store stormwater until water levels in nearby creeks, rivers and storm systems are more apt to handle the runoff.

The 49-home project was initially approved by city officials. Soon afterward, the 2014 storm flooded the site, sending up to 4 feet of water onto nearby streets. Jensen said there was widespread support in the city to stop the project, even if there were concerns about the costs. Eminent domain requires that landowners receive "fair value" for their property.

"That was the third time that area flooded in five years," Jensen said. "So it was getting harder and harder to say, ‘Well, once that development’s in, it won’t flood anymore.’ You know, those hundred-year floods that everybody talks about, which are supposed to be few and far between, are happening on a regular basis."

Garland, the developer, said he was satisfied with the outcome, though he wishes it wouldn’t have taken two years or more to complete. He also lamented what he says are increasingly strict wetland regulations, which he says reduce property values by making them less attractive for development.

He’s also not convinced that scientists are right about the effects of climate change. The most recent National Climate Assessment says average rainfall has increased 5 percent nationwide since 1900. It’s higher in the Midwest, where average precipitation since 1991 has climbed 9 percent compared with the period between 1901 and 1960.

"Do I buy into the green stuff? No. I’m not a fan of climate change," Garland said. "I’m just not sold on it. Not there yet."

That’s not uncommon in this largely Republican city.

Jason Scott, whose basement was flooded in 2013 and 2014, requiring two remodeling jobs, remembers using waders to walk cross the street during the latest flood. The water was waist-high, he said.

Asked whether rising temperatures could be contributing to the prevalence of floods, he said, "That’s a good question. I’m not a real big believer in climate change to be honest with you."