‘A cry for survival comes from the planet itself’ 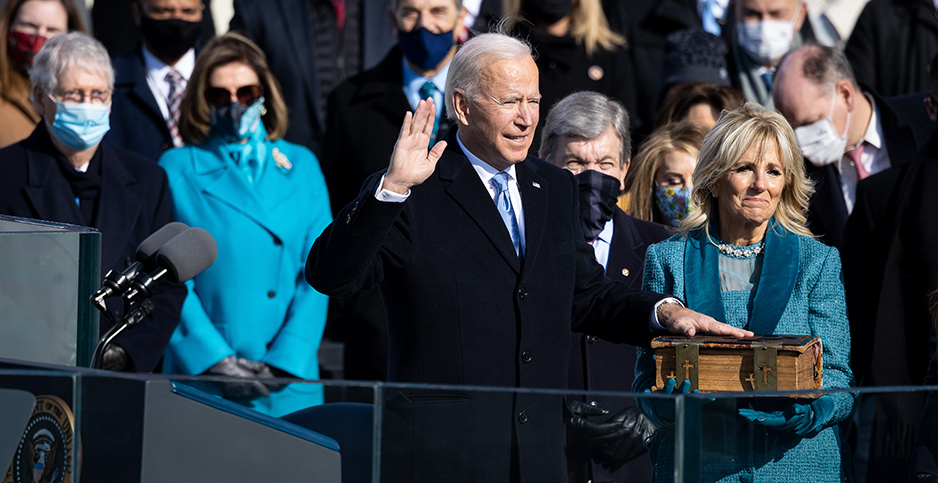 President Biden declared the United States to be in a "time of testing" with intersecting troubles, including a "climate in crisis," but called for unity to confront them in his presidential inaugural address today.

Just after being sworn in as the 46th president by Chief Justice John Roberts outside the Capitol, Biden gave a somber address that sought to convey the direness of the combination of climate change, the COVID-19 pandemic, the economic crisis and racial justice, but also hope in coming out of the problems as a united country.

Meanwhile, the attack on the Capitol just two weeks ago, in which a mob sought to stop certification of Biden’s electoral victory over President Trump, loomed large over the ceremony.

"We face an attack on our democracy and on truth. A raging virus. Growing inequity. The sting of systemic racism. A climate in crisis. America’s role in the world," Biden told a crowd that was limited to members of Congress, their guests and other dignitaries — all wearing masks, spaced apart and accompanied by thousands of National Guard troops.

"Any one of these would be enough to challenge us in profound ways," he said. "But the fact is, we face them all at once, presenting this nation with one of the gravest responsibilities we’ve had."

Earlier, Biden declared that "a cry for survival comes from the planet itself, a cry that can’t be any more desperate or any more clear now."

While Biden’s speech was accompanied by light snow flurries and blustery weather, the sun nonetheless shone brightly over the ceremony to inaugurate him and Vice President Kamala Harris, the first woman, first Black person and first Asian American person to hold the office.

The president’s speech was largely a reflection of the "four crises" narrative that has dominated Biden’s messaging since Election Day, reflecting the prioritization he plans to put on fighting climate change, COVID-19, racism and the economic depression.

But even in its gloomiest parts, the speech was far more positive than Trump’s dark 2017 inaugural speech on "American carnage." Biden had no shortage of hope and desire to rally the nation to help accomplish his goals together, and he pledged to fight just as hard for his opponents as his supporters.

"With unity, we can do great things, important things," he said. "We can right wrongs. We can put people to work in good jobs. We can teach our children in safe schools. We can overcome the deadly virus. We can reward work and rebuild the middle class, and make health care secure for all," he continued. "We can deliver racial justice, and we can make America once again the leading force for good in the world.

"Together," Biden went on, "we will write an American story of hope, not fear. Of unity, not division. Of light, not darkness. A story of decency and dignity, love and healing. Greatness and goodness."

But later today, he plans to carry out numerous executive actions to start reversing Trump’s policies, including reentering the Paris Agreement and targeting more than a dozen other environmental and climate change rollbacks (Climatewire, Jan. 20).