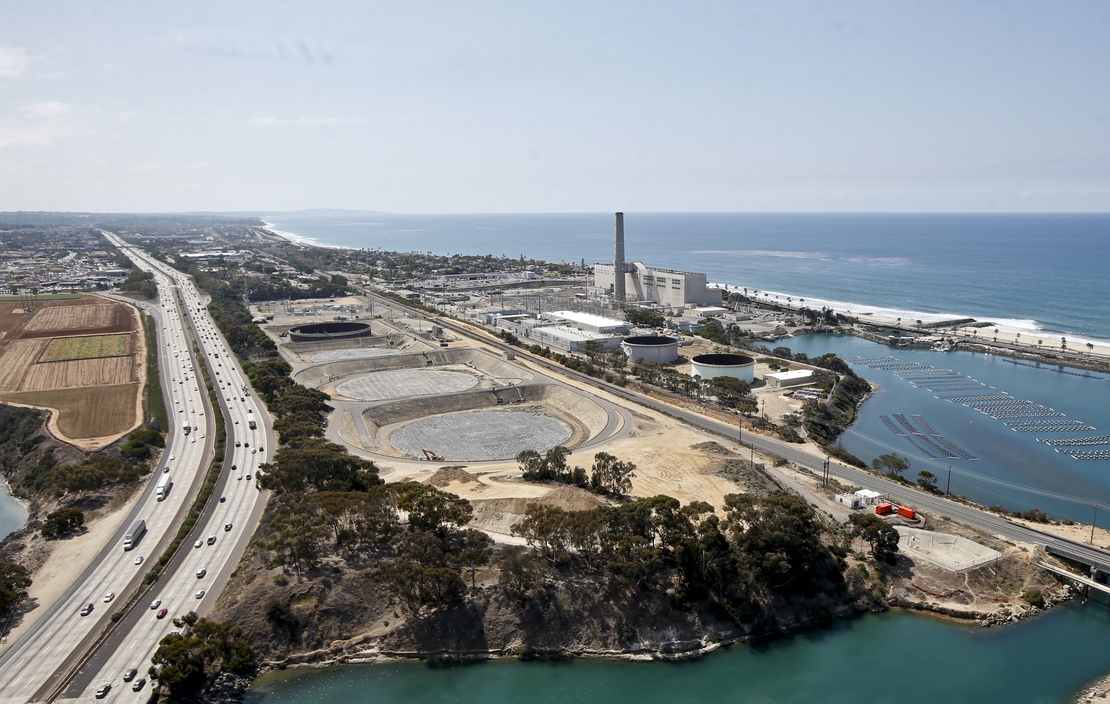 The Carlsbad, Calif., desalination plant, seen in a Sept. 4, 2015, photo, borders Interstate 5 on one side and the Pacific Ocean on the other. Lenny Ignelzi/AP Photo

Despite the decades of drought that could soon force California policymakers to make tough choices about water use, it’s unclear if the state will — or should — turn aggressively to the Pacific Ocean for new supplies.

While the option to tap into the waters off the state’s 840-mile coastline might seem like an obvious choice given shrinking sources of fresh water inland, scientists, environmental advocates and local officials warn that turning seawater into drinking water is a complex decision.

“California is experiencing a climate change-fueled water crisis that will only worsen with time,” said Kate Huckelbridge, deputy director of the California Coastal Commission, last month. “It is critical that we tackle this crisis in ways that protect our coastal and ocean resources and provide safe and equitable drinking water for all Californians.”

That commission is the state agency charged with overseeing development along the coastline, including the permits to build desalination facilities.

In recent months, the agency has issued a series of decisions that at first glance appear to send a mixed message on the idea of tapping the salty ocean water and making it potable through desalination.

In the spring, the commission rejected a $1.4 billion proposed plant in Huntington Beach that had been debated for 20 years and won the backing of Democratic Gov. Gavin Newsom. Then last month, the commission approved a much smaller project — generating 5 million gallons of water daily instead of 50 million — in a different Southern California community about 20 miles away.

“The project before you today, although not perfect, provides a solid example that we can use in planning for future desalination,” Huckelbridge explained before the commission voted in favor of the project in Dana Point, a small city in Orange County.

Could it be that California, which expects to lose as much as 10 percent of its water supply in the coming decades, is at a turning point on desalination? The commission’s recent actions could point to a future road map. Smaller-scale water production aimed at local communities, rather than a wholesale replacement for the state or a region, might end up being the way forward.

The state has announced plans to embrace its use, while the federal infrastructure law earmarked $250 million for desalination projects. But there’s a reason desalination is often contentious: It is expensive, produces an environmentally hazardous salty discharge that must be dealt with, and uses up a lot of energy to move and clarify the water.

“As soon as you start looking at the details — looking at the economics, the environmental impacts, the environmental justice impacts — desalination really does not make much sense at all in most scenarios,” argued Mandy Sackett, Surfrider Foundation’s California policy coordinator. Her group has protested large-scale projects on the state’s coast.

Sackett said while her organization did not oppose the recent Dana Point project, it isn’t about to embrace a wave of new desalination plans.

“We see desalination as a method of last resort,” she said.

After decades of drought, California is now looking at a water crisis that will affect both farmers and residents. Out of the seven Western Colorado River Basin states, California claims the largest share of Colorado River water, with dibs on 4.4 million acre-feet of water annually. The river supplies about a third of the state’s annual needs, according to the nonpartisan Public Policy Institute of California.

To date, California has been shielded from reductions thanks to the fact that it holds senior water rights on the river. In other words, because it has been using the river the longest, it is still the first in line for water even when levels drop.

The other Lower Basin states — Nevada and Arizona — have already faced significant cuts under a multistate Drought Response Operations Agreement signed in 2019. As water levels in the river’s Lake Mead continue to drop, California, too, will face cutbacks, losing 4.5 percent of its annual allocation in 2024 (Greenwire, Oct. 31).

In August, Newsom outlined a plan to “create more water” for the state, with increases in recycled water, stormwater capture and conservation adding nearly 3 million acre-feet of water to the state’s annual supply by 2040 (E&E News PM, Aug. 11).

“As California becomes hotter and drier, we must become more resourceful with the strategic opportunity that 840 miles of ocean coastline offer to build water resilience,” the report states.

When state officials rejected the Huntington Beach project in May, theypointed to concerns over the project’s potential to harm marine life and water quality by discharging about 57 million gallons of “high-salinity brine” per day, as well as seismic and flooding risks.

But Latham & Watkins LLP attorney D.J. Moore, who represented Poseidon Water LLC before the California Coastal Commission in May, argued those concerns had been addressed during the nearly 20 years of project planning.

“The need for this project is critical and without question. California is at an inflection point on water,” Moore said.

He asserted that Poseidon’s project would have been built to the most stringent construction standards and would have complied with the state’s ocean plan for intake and discharge.

“It’s certainly the most extensively studied desal facility in the state, if not the world,” Moore said.

Last month, commissioners who raised objections to that project praised the proposal for the Doheny Ocean Desalination Project in Dana Point. The plant won people over with its sustainable design, including efforts to curb impacts on marine life by utilizing intake wells that are buried beneath the ocean floor.

California adopted new mandates in 2016 that require ocean desalination plants to “minimize intake and mortality of all forms of marine life.”

The California Coastal Commission will consider its next desalination proposal Nov. 17, when it reviews a plan from the California American Water Co. to draw water from Seaside, Calif., to supply a private plant in Monterey County.

According to EPA statistics, the average American uses about 88 gallons per day, or 32,000 gallons of water annually.

The California Department of Water Resources reported in 2021 that the median indoor water use in the state is 48 gallons per day per person, while another quarter of California households use even less at 42 gallons per day.

Before the approval of the Dana Point facility, California already claimed 12 seawater-based desalination plants. According to Newsom’s plan, those plants produce a combined 89,000 acre-feet of usable water per year.

In his proposal to produce more water for a drying California, Newsom actually proposes increasing the use of desalination not for ocean water, but for brackish — or slightly salty — groundwater across the state.

The state is already home to 23 groundwater desalination plants that clean nearly 140,000 acre-feet of water annually. Newsom’s report proposes increasing that production by 60 percent, an additional 84,000 acre-feet per year by 2040.

In September, the state Department of Water Resources announced $6 million in grants for pilot projects to desalinate ocean and brackish water in California, funded by a 2014 bond program to address water resources in the state.

New Mexico Desalination Association Vice President John “Grizz” Deal, a proponent of utilizing “unconventional waters” to address demand, suggests that desalination, whether from groundwater or other resources like oil and gas wastewater, is on the cusp of major expansion.

“You know you’re not supposed to be able to see tipping points until you’re looking in the rearview mirror. But this feels like one,” Deal said.

Among the major challenges to turning ocean water is that it produces two outcomes: potable water and an incredibly salty sludge.

“The typical recovery is about 50 percent,” explained Mark Holtzapple, a chemical engineering professor at Texas A&M University whose work focuses on sustainable and renewable technologies. “For every gallon of seawater you process, a half-gallon of clean water is produced. Then you have to do something with the other half-gallon that’s left over, and that’s where the problem is.”

The standard desalination process is known as reverse osmosis, which utilizes a membrane and pressure to separate salt from the liquid. The result on one side is potable water, and on the other a brine with about 7 percent salinity, or double the standard 3.5 percent found in ocean water, Holtzapple explained.

“There are legitimate reasons to object,” he added. “The first one is that it is saltier than the seawater and the microorganisms, and the fish and crab and all the critters are designed to tolerate 3.5 percent salt. … You can mess up the ecosystem.”

There is also the issue of replacing the membranes themselves, Holtzapple said, noting the delicate materials — as thin 1/500th of a human hair — typically last about five years.

“Another problem with the technology is its very expensive capital-wise, and it requires quite a bit of energy” to move water, he said. “When you put all these things together, it’s not an optimal solution.”

But Holtzapple’s research suggests that technological changes could improve desalination, including the use of vapor compression.

“That’s the beauty of technology. You can change the paradigm,” he said.

Unlike the reverse osmosis process, vapor compression can recover 100 percent of water and leaves behind salts from the ocean, including minerals like potassium chloride, lithium, uranium and gold.

“Our view is that rather than throwing away these valuable minerals, we mine them,” added Holtzapple, whose research has been tested in a 50,000-gallon-per-day facility in Laredo, Texas.

“If half the California population got its water from the ocean, there’s about $6 million worth of gold we could recover from the salt,” Holtzapple estimates. “There’s literally billions of dollars of value in the other minerals.”

While desalinating brackish groundwater is also a viable option to address water shortfalls — the less salt in the water, the less energy is required to separate it from the liquid — Holtzapple warned it is a limited resource.

“Is it something that is sustainable? Or is it something you can only do for 50 or 100 years until that aquifer is drained?” he said.

But New Mexico Desalination Association’s Deal, who also serves as CEO of IX Power Clean Water Inc., asserts new plants could be based on “unconventional” sources of water, including wastewater from oil and gas production.

“It comes up with every barrel of oil, so why aren’t we treating all our oil and gas wastewater?” Deal said, noting that in New Mexico, one barrel of oil typically produces about seven barrels of wastewater.

“You’ve got to take the hydrocarbons out, you’ve got to do something with the salt because the salt is high. But all that’s understood and known,” he added.

Deal emphasized, however, that his organization does not support treating wastewater from hydraulic fracturing, or fracking.

“Nobody is proposing treating fracking water because we don’t know what’s in it,” he said, noting most formulas equate to trade secrets.

Deal also acknowledged that reclaimed water from oil and gas operations would not likely be for direct human consumption, explaining that it could be used for agricultural needs or growing turf.