A fight about climate change — but not emissions 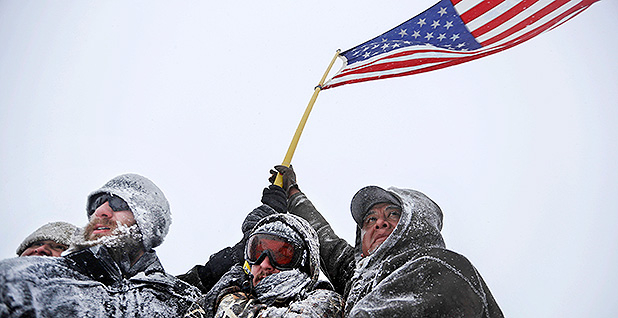 Military veterans huddle together to hold a U.S. flag against strong winds during a march to a closed bridge outside the Oceti Sakowin Camp, where people gathered in early December to protest the Dakota Access oil pipeline in Cannon Ball, N.D. Photo courtesy of AP Images.

The Standing Rock Sioux Tribe and its supporters captivated a nation this year with their protests against the Dakota Access oil pipeline.

Their victorious faces beamed from the front pages of newspapers around the country the day after the Obama administration halted construction of the project. In headline after headline posted outside the Newseum in Washington, they were standing up to big business and big government, protecting their way of life and a sacred water source.

Behind the scenes, climate activists were also championing the temporary Dec. 4 win as the start of a grass-roots revolution against fossil fuels. But as environmental groups aim to make protests against infrastructure the new face of the climate movement, there’s no proof their efforts are hindering production or reducing the greenhouse gas emissions that cause global warming.

Industry analysts say companies will keep extracting oil at near the same levels and spending more money to move it by rail if they don’t have pipelines. They say international prices have a bigger impact on production than do marginal additional transportation costs.

"Economics tells you when you receive a lower price for a good, you produce less of that good," said Mark Sadeghian, a natural resources analyst for Fitch Ratings. Sadeghian said that while protests may limit some oil production in landlocked regions where transportation costs eat into revenues, global markets are what determine production.

Nonetheless, climate campaigners see Dakota Access as a focusing point in their battle to stop pipelines in the hope of stalling fossil fuel development. They plan to make protests a key part of their strategy under President-elect Donald Trump, who has suggested he would approve both the Dakota Access pipeline and the controversial Keystone XL project when he takes office.

"I will tell you when I get to office, if it’s not solved, I’ll have it solved very quickly," Trump told Fox News in a recent interview. "I think it’s very unfair. So it’ll start one way or the other."

Activists who acknowledge that prices have the biggest impact on production say they are playing the long game. Lena Moffitt, director of the Beyond Dirty Fuels project for the Sierra Club, said her group worries that if prices rebound, companies will use the growing network of pipelines to get their products to the Gulf of Mexico to export to other countries.

"When you build a pipeline, you’re signaling to the market that drilling and fracking is open for business," said Nebraska anti-Keystone activist Jane Kleeb.

Constructed by Energy Transfer Partners LP, the nearly finished 1,170-mile Dakota Access pipeline would move oil from North Dakota’s Bakken Shale to refineries and pipelines in Illinois that connect to export hubs. Oil Change International, a climate advocacy group, estimates that using the oil in the pipeline would contribute 101.4 million metric tons of carbon dioxide equivalent per year, equal to the emissions of about 30 coal plants.

Without Dakota Access, however, much or all of the oil will probably keep moving by rail, argues John Stoody, the Association of Oil Pipe Lines’ vice president of government and public relations. Oil by rail is more expensive, and spending more on transporting oil could make it harder for companies in the Bakken to compete with operations closer to the Gulf of Mexico and other access points. So it’s possible they might slow down how much they’re producing.

"Could it have an impact on the margin? Yeah, it could," said Sadeghian, the Fitch analyst. "But broad brush, I think at this point the global factors, including OPEC decisions … and global inventory balances and demand are probably having a bigger impact moving the needle than the protests are."

Oil prices right now are low, so every dollar companies spend shipping their product makes a bigger difference to their bottom line, Sadeghian explained. That’s why the impact of stalled infrastructure could vary from region to region.

Environmental groups emboldened by the Obama administration’s rejection of the Keystone XL oil pipeline have taken their protests across the country. They take credit for helping to cancel or delay many of the nearly two dozen fossil fuel infrastructure projects that have stalled since the Keystone decision a year ago.

Kleeb counts more than 20 pipeline projects for which plans have changed because of unfavorable economic conditions and resistance from environmentalists.

Fossil fuel companies have paid close attention to the trend, fearing that future activism could make it hard to permit new projects (Energywire, Dec. 6). But projections show that oil production will grow in the United States if and when low prices rebound.

Stoody noted that "pipelines are only built after there are signed contracts to move that amount of crude oil or petroleum product." Stoody said the oil that would move in the Dakota Access pipeline will end up on railways. He also argued that transporting oil by rail can lead to dangerous explosions, and produces more carbon emissions than pipelines.

Moffitt acknowledges that some of the oil destined for the pipeline will likely move by rail, which might not be as safe or environmentally friendly.

"I think that our job as environmental advocates is to fight for the world that we want to see, and that’s a world where you don’t have to make that choice," she said.

Sara Shor, the Keep It in the Ground Campaign manager for 350.org, calls stopping all new fossil fuel infrastructure the "rallying cry" of the climate movement.

"If we can interrupt and disrupt as many pipelines and fossil fuel projects as possible, we can have an impact on the industry and an impact on production," Shor said. She believes that eventually, companies will run out of space to move oil on existing railways and pipelines.

Plus, Dakota Access may be just a fraction of the country’s infrastructure, but "we’ve always known that this fight is bigger than one pipeline," Shor said.

"Millions of people, hopefully, will go on to fight local projects," she said.

The groups protesting the Dakota Access pipeline point to the Keystone XL pipeline as the galvanizing event that got activists lining up against infrastructure. The completed Keystone line would have moved 800,000 barrels of oil per day from the oil sands of Canada south to the Nebraska border with Kansas.

President Obama shuttered the project after it became a symbol of the fight against climate change. Several State Department studies, however, found that constructing the pipeline would not have an impact on whether the oil was used because it was already moving to market via rail and other pipelines.

Stoody makes the same argument with the Dakota Access pipeline. In comparison, it would move about 470,000 barrels per day, or 170 million barrels per year, compared to the total 16.2 billion barrels of oil that are transported in pipelines around the country, Stoody said.

"As long as consumers demand energy through their daily lives, their consumer products, their need to work and travel, as long as that demand is present, pipelines are the safest and cheapest way to meet that consumer demand," Stoody said.

Still, she said, "at the end of the day, we’re looking at what increasing scientific consensus says, to leave the vast majority of resources in the ground."