A guide to Biden’s climate summit 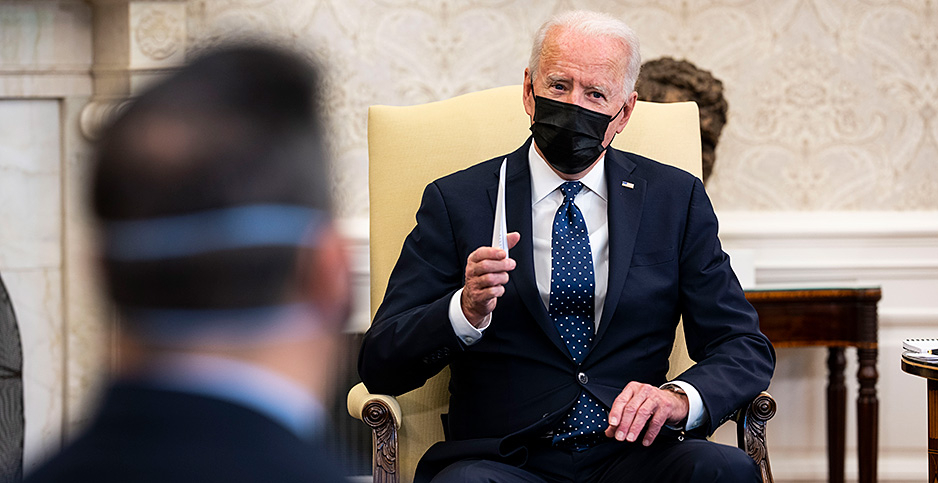 The world’s top emitters will convene tomorrow — and the setting might as well be a virtual chess board.

The United States is not the knight. At least not yet.

Central to the agenda will be whether the United States commits to the type of aggressive emissions cuts that it’s pushing for from other countries — and then whether it can fulfill those promises.

"The world is really looking to the U.S. to show some serious commitment here," said Rachel Cleetus, climate and energy policy director for the Union of Concerned Scientists.

The Biden administration is widely expected to announce a 50% reduction in emissions by 2030, based on carbon levels in 2005. That would almost double previous U.S. commitments of 26% to 28% reductions by 2025.

Whether other countries match, or exceed, that goal is an uncertainty that could help define the early days of Biden’s presidency.

"There’s a lot of balls in the air, and I think we will be getting some significant announcements, but it’s not clear how many," said Alden Meyer, a senior associate working on climate policy at the think tank E3G.

Sue Biniaz, senior adviser to climate envoy John Kerry’s team, said yesterday that she expects a "grab bag" of announcements during tomorrow’s summit. But whether those would take the form of climate goals under the Paris Agreement or some other type of commitment would be up to individual countries.

"I would think of it as the atmosphere cares less about the exact form of an announcement and more about the emission reductions that flow from the announcement," she said.

Nathan Hultman, of the University of Maryland’s Center for Global Sustainability, said he sees the summit as creating a road map to deliver climate action and allowing the United States to resume global climate leadership.

"Summits are moments in time, and they’re really best viewed, in my sense, as waypoints in an evolving strategy to deal with climate change globally, and this is one of those waypoints," he said.

Some countries are already stepping up.

The European Union has announced a goal of reducing greenhouse gas emissions by at least 55% below 1990 levels by 2030, and yesterday, the United Kingdom boosted its target to a 78% reduction by 2035.

Cleetus of the Union of Concerned Scientists said she’ll be looking to see whether Kerry’s recent diplomatic efforts have encouraged action from countries such as Japan, South Korea and Canada, which have yet to announce their revised targets.

Leaders of 40 countries have been invited, including many of the world’s top emitters. Of those countries, 17 produce roughly 80% of all planet-warming emissions and account for the lion’s share of the global gross domestic product.

The leaders of China and India are expected to attend, accounting for, respectively, the highest- and third-highest-emitting countries.

Also included are the Marshall Islands, Antigua and Barbuda, Bangladesh, Vietnam, Kenya, and other developing countries, many of which are highly vulnerable to the impacts of climate change.

Other countries to watch, like Chile and Argentina, have committed to ambitious targets and are on the path to achieving them even though they are not among the largest emitters, said Niklas Höhne at the New Climate Institute.

"That can be inspiring for other countries," he said.

Why are they coming?

China has three key considerations going into the summit, said Li Shuo, a senior climate and energy policy officer for Greenpeace East Asia: "To project a positive green image, not be seen as caving to U.S. diplomatic pressure and to improve the overall U.S.-China bilateral relationship."

"What is clear is that more ambition will be a key ingredient for success," he said.

To be seen as credible, Li said, China would need to commit to reducing the role of coal at home and abroad and set an absolute carbon target. It plans to peak its emissions before 2030 but has not provided a concrete timeline.

The United States also has a credibility gap, Li said. It needs to set an ambitious target, he said, and take steps to achieve it.

"The best diplomacy with China starts at home," he added.

The United States has also pressed South Korea and Japan to reduce their support for coal.

Takeshi Kuramochi, a senior climate policy leader at the New Climate Institute, said that while Japan could announce that it will stop financing coal projects overseas, stopping the use of coal domestically would be harder to do.

Ulka Kelkar, director of the India climate program at the World Resources Institute, said that though India is a large country, it’s responsible for very little historic emissions.

"The challenge is that as a growing economy, we are in a position to choose an unfamiliar new path to development — one that could usher significant environmental and socio-economic benefits, but could also mean very real costs for us," she said in an email. "Climate talks this week and going forward need to discuss partnerships that can accelerate the technological innovations needed to bring down the cost of climate solutions."

Developing countries would like to the see the United States fulfill the pledge it made to the Green Climate Fund, to which former President Obama promised $3 billion. Just $1 billion was given to the fund before the Trump administration canceled the rest.

Patricia Espinosa, executive secretary of the U.N. Framework Convention on Climate Change, highlighted the important role that financing would play in helping countries mitigate and respond to the impacts of climate change.

"If the finance commitment is not fulfilled, the credibility of the entire process will be undermined," she told the U.S. House Foreign Affairs Committee yesterday.

In order to achieve the temperature goals of the Paris Agreement, global emissions would need to be halved in the next 10 years, said Höhne, who helps produce the New Climate Institute’s Climate Action Tracker, which monitors countries’ progress toward their Paris targets.

Those goals are nowhere close to being achieved.

A U.N. report released in February showed that current climate commitments would only reduce global emissions 1% by 2030 from 2010 levels.

Many countries have already put forth commitments to achieving carbon neutrality by 2050. China has said it can’t be expected to move more quickly toward net-zero emissions before 2060.

In a meeting with reporters Sunday, Kerry indicated that the focus needs to be on this decade to curtail the worst impacts of climate change.

As for Biden’s summit, the biggest risk is that the U.S. target will be seen as too weak, experts said.

What it means for Biden

Administration officials have sought to dispel that idea.

On Monday, Vice President Kamala Harris said that a big part of achieving U.S. climate targets is about building out industries and creating jobs in the low-carbon economy. Secretary of State Antony Blinken also highlighted how that transition could help boost U.S. competitiveness.

Kerry, meanwhile, has sought to bolster U.S. credibility and emphasize the value of cooperation with other countries, such as working with India to help it achieve its goal of 450 gigawatts of renewable energy by 2030.

"We know from the past that engagement matters, and with the right political conditions, it will work," said Li from Greenpeace. "In light of the challenges above, including the U.S. credibility deficit and the further ambition we need from Beijing, engagement matters now more than anytime in the past."