A look at the climate science sent to Trump 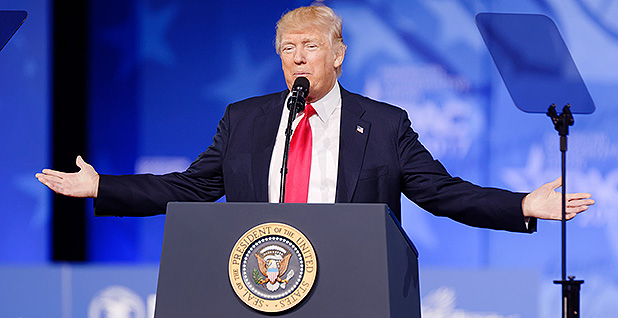 President Trump says there are "scientists on both sides of the picture" when it comes to climate change. Michael Vadon/Flickr

The White House requested a PowerPoint presentation for President Trump from a group devoted to attacking climate science.

During the transition period after Trump’s electoral victory, senior White House aides reached out to the Heartland Institute, a think tank that works to cloud the findings of scientists, to request a presentation on climate change, said James Taylor, the organization’s senior fellow for environment and energy policy.

"He’s an open-minded and intelligent man, so of course he wanted the best information arguments that both sides had to offer," Taylor said. "We were invited to send in the PowerPoint for the president’s viewing, which we did. We were expecting to get a call to do so in person, but we received a call that it was unnecessary, that we won the day."

Taylor refused to provide the PowerPoint to E&E News unless the news outlet organized a public debate between Taylor and Gore. Taylor said he would "kick Gore’s butt" in a science debate, "the way Mike Tyson beat Michael Spinks." He was referring to the 1988 bout between two undefeated boxing champions.

Taylor said the PowerPoint was similar to the group’s publication, "Climate Change Reconsidered." The publication, which drew insights from 117 scientists, economists and others, including many funded by the energy industry, concluded that the world needs more fossil fuels and that climate change isn’t a problem.

The Heartland publication states that climate scientists don’t understand environmental economics, that the unprecedented spike in warming in recent decades may be natural, and that fossil fuels lift people out of poverty and help them live longer.

It highlights areas of uncertainty from the Intergovernmental Panel on Climate Change, which won the Nobel Peace Prize in 2007, while downplaying its overarching message that humans are warming the planet at an accelerating rate. The Heartland publication cites the work of many researchers funded by the energy industry, including some that have been nominated to the Trump administration’s scientific advisory boards at EPA and whose work is used to fight climate regulations.

"Fossil fuels have benefited humanity by making possible the prosperity that occurred since the first Industrial Revolution, which made possible investments in goods and services that are essential to protecting human health and prolonging human life," the publication says. "Fossil fuels powered the technologies that reduced the environmental impact of a growing human population, saving space for wildlife."

Taylor could not say whether Trump had personally seen the PowerPoint, and the White House did not respond to a request for comment. It’s not clear what, if any, climate research has been considered directly by the president.

The world’s major science academies determined long ago that there is no legitimate academic debate about whether humans are driving climate change. Countless studies have traced how humans are warming the planet at an unprecedented pace through the burning of fossil fuels. Also, global warming is permanently changing parts of the planet, and it won’t "go back," as Trump claimed last week.

Trump has recently been pressed about climate change by reporters because the IPCC report released earlier this month contained a series of dire warnings that time is running out to craft a global climate policy that could curb some of the worst effects of climate change.

Though Trump’s comments on climate change are mostly dismissive, they reflect a slight shift in rhetoric, observers say. It might provide clues into the types of research that have reached the president’s attention, whether through a presentation or, more likely, from friends, family or advisers, according to George David Banks, a former White House adviser under Trump.

In the past, Trump has dismissed climate science as a "hoax." On a cold day in April 2016, he said, "We need some global warming!"

His newest assertions suggest that the president has picked up some new talking points, said Pat Michaels, director of the Center for the Study of Science at the conservative Cato Institute. He said Trump appears to have been briefed on the contents of his 2016 book, "Lukewarming." He’s glad that Trump no longer calls climate change a "hoax" and doesn’t explicitly reject the role of humans on warming, even if the extent of people’s contribution is unknown, as Michaels sees it.

Michaels thinks the president has absorbed the lukewarm argument, which is a line of thinking among skeptical conservatives that claims humans have some effect on climate but are not the primary cause of rising temperatures.

"Somewhere it’s getting through or maybe it was just fortuitous," said Michaels. "He said it’s not a hoax and he really gave what I think is the basis of the lukewarm argument, which is there is some effect, it doesn’t appear to be as large as it is forecast to be, which isn’t much difference than he said."

Researchers who question climate science recognized a kindred spirit when Trump said that "scientists also have a political agenda."

"I have a natural instinct for science, and I will say that you have scientists on both sides of the picture," Trump told the Associated Press when asked about the IPCC report last week.

Trump’s rhetoric has shifted recently, and it could be because he was influenced by those within the administration who accept climate science, said Banks, the former White House energy and climate adviser.

"It appears the president’s message around climate has moderated away from openly calling it a hoax to suggesting that humanity has a role but is unsure of the size of the role," he said. "I think that is likely due to his many conversations with Ivanka [Trump] and people within that circle, including foreign officials and climate activists."

The false notion that there is a debate in climate science has been pushed by conservative think tanks and politicians for years. Just 15 percent of the public understands that 97 percent of the scientists publishing in peer-reviewed literature agree on climate change, according to Yale University polling.

Former EPA Administrator Scott Pruitt, who resigned amid a series of ethics investigations, tried to create a "red team, blue team" climate debate that would have portrayed science as a partisan battle, rather than a field of science that trended in the same direction for years.

EPA officials brought in Will Happer, an emeritus physics professor at Princeton University, to discuss the debate. It was later canceled by White House officials. Happer, who does not have a degree in climate science, met with Trump during the transition and told him that climate science had "become sort of a cult movement in the last five or 10 years," he said in an interview with The Scientist magazine.

Happer told the magazine that Trump agreed with him. Last month, Trump appointed Happer to serve on the National Security Council as the senior director for emerging technologies. Happer also heads the CO2 Coalition, which advocates for a rejection of climate science, and he has said the world is in a "CO2 drought" and that rising levels of greenhouse gases are harmless.

The CO2 Coalition, Cato Institute and Heartland Institute have all received funding from the Mercer family. The family is one of Trump’s top donors and spent about $4 million in 2016 on groups that fight against climate science, according to tax records.

One place where Trump won’t be receiving a personalized climate briefing is at NASA, one of the world’s top researcher agencies on global warming.

The federal government employs hundreds of climate scientists who could articulate climate science to the president, but there is no indication that he has ever sought a briefing. NASA Administrator Jim Bridenstine, who previously rejected mainstream climate science as an Oklahoma congressman but said his views "evolved" after he took over the space agency, recently said he had no plans to brief Republicans about climate science.

"Look, if I start engaging in what to do about the science that we receive, then it politicizes what NASA is all about, and we don’t want to do that," Bridenstine told The Atlantic magazine in an interview last week. "All we’re going to do is study the planet and make sure that all of that data and all of that science is made available to the public."