A man, his bulldozed neighborhood — and NEPA 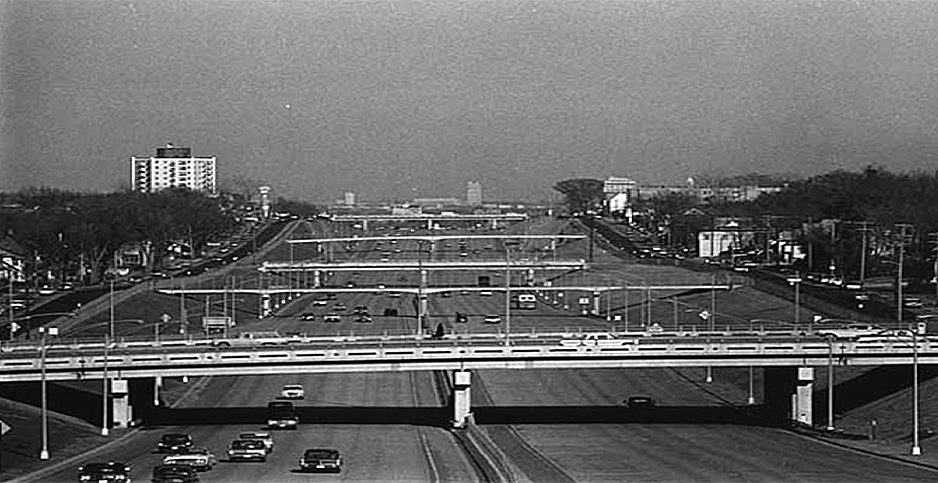 The construction of Interstate 94 paved over the community of Rondo in St. Paul, Minn., in the 1950s. St. Paul Pioneer Press

The year was 1956. The federal government wasn’t required to ask Anderson or his neighbors in the Rondo neighborhood for input or consider environmental consequences before cementing the town.

"They found our little area, and they wiped it out," Anderson recalled in a telephone interview this week.

Anderson, 80, wants to make sure that doesn’t happen again. The former attorney and Minnesota state librarian is among 175,000 or so people who have filed comments on the Trump administration’s plan to change the implementation of the 1970 National Environmental Policy Act with an eye toward speeding up federal reviews of pipelines, highways and other major projects. The comment period closed Tuesday.

Foes of the White House’s NEPA proposal say it would limit public input, hasten the destruction of natural resources and exacerbate climate change.

For Anderson, the NEPA changes are personal. As a teenager, he felt firsthand the pain of losing a community built by African Americans, many of whom had been forced out of white neighborhoods by racial discrimination. In the Rondo neighborhood, he said, jet pilots lived next door to janitors who lived next door to chefs.

In the stroll between his car and house, Anderson said, he could hear a range of music coming out of open doors — from "symphony to Miles Davis to the blues."

When he and his neighbors learned about the I-94 project, it was too late, and they lacked the political power to fight back. They lost houses and businesses and also the culture.

"It felt like an amputation," said Anderson, whose story is being shared by the Center for American Progress.

The NEPA proposals, he said, are largely bureaucratic jargon.

"The real story is much more personal, much more gutting, and paints a much starker picture of what’s at stake," he said.

More than 23,000 comments on the NEPA regulations used the word "racism," arguing that people of color and with lower incomes tend to live near higher levels of pollution — findings reported in a 2018 EPA study, "Disparities in Distribution of Particulate Matter Emission Sources by Race and Poverty Status."

"We know that vulnerable communities struggling with poverty and racism often bear the brunt of health problems caused or contributed to by poorly-planned federal projects," the Unitarian Universalists for Social Justice wrote in its comments to the White House. "NEPA is a critical tool for ensuring that the voices of these communities are not drowned out by powerful economic interests."

Christy Goldfuss, who chaired the White House Council on Environmental Quality under President Obama and is now at the Center for American Progress, wrote that the proposed changes could silence the public and create "loopholes" that allow federal agencies to "selectively ignore public comment by only a summary of comments and tailoring the comment process to fit an agency or project developer over the American public."

"CEQ believes a more coordinated, predictable, and inclusive environmental review and permitting process will facilitate the development of modern, resilient infrastructure to meet the needs of all communities," he wrote.

The proposals, he said, call for "meaningful public participation earlier in the process by requiring that in the notice of intent Federal agencies provide more information to the public."

‘You know you are going to lose’

Public comment has become a point of contention in the Trump era as some agencies have opted for online-only sessions.

Congressional Democrats charged that the 60-day comment period for the NEPA proposal was inadequate and that 1977 CEQ regulations set a baseline of three hearings. CEQ held two hearings on its current proposal — one in Denver and one in Washington, D.C.

Another NEPA change addresses whose comments matter and whose don’t.

The draft states that "comments not timely raised and information not provided shall be deemed unexhausted and forfeited."

Goldfuss maintains that this means commenters must provide an exhaustive list of impacts if they want to challenge a project.

That, she wrote, would place an "impossible burden on ordinary citizens" at the outset.

But Chad Whiteman, an attorney with the U.S. Chamber of Commerce, said the White House is trying to deal with potential problems earlier in the process of writing an environmental impact statement (EIS) that’s required by NEPA.

"There are times when comments are submitted after the initial comment period," he said in an interview. "If the agency has to go back and revise the EIS and resubmit, you get in this potential U loop of redrafting EIS and continuing to address issues. I think it’s trying to have all of these issues addressed early on."

In some ways, he said, the proposal could improve public participation. The requirement of setting presumptive page limits would allow ordinary people to read the statements, he said.

"The average page count is 700, and the appendixes are over 1,700 pages. It’s really hard to understand how that’s accessible to the public," he said. "So I think the provisions that are clarifying things and simplifying definitions will hopefully make the EIS more concise."

The proposal would also require agencies to provide rule summaries that opponents said could be helpful but also could "close out" future commenters.

Critics of the NEPA proposal further argued that the revisions would give federal agencies too much power, which Goldfuss called alarming, given the number of former industry executives occupying top Trump administration posts.

She claimed the new rules would give "undue deference to agencies that could result in self-dealing that puts polluters before the public."

For his part, Anderson said he wants his voice to be heard, even as he doubts the proposal will change.

"You know you are going to lose," he said, "but if you don’t fight, you still raise a question in the mind maybe they are right."