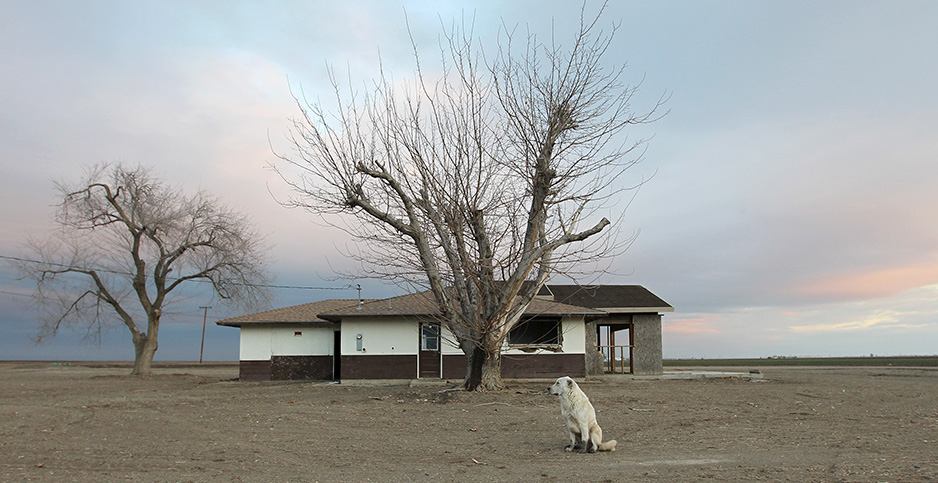 A dog hangs around an abandoned farmhouse in California's drought-stricken Central Valley. A growing chorus of experts are calling on the federal government to create a national climate service. David McNew/Getty Images

As the George W. Bush administration was drawing to a close, Scott Rayder faced a tough choice. Should he push to fund a new national climate service? Or should he direct those funds instead toward a set of sensitive scientific instruments for the government’s new polar-orbiting satellite system?

At the time, Rayder was chief of staff at NOAA, where the concept of a national climate service had gained traction under NOAA Administrator Conrad Lautenbacher. The idea was to establish a central home for federal climate data — which is often scattered across the federal science agencies — with the potential ability to provide long-range climate forecasts and information for climate decisionmaking.

But with the outgoing administration preparing to make its final request to Congress, Rayder was mired in budget negotiations with the White House.

Either choice would have clear benefits for climate science. But a climate service first needs climate data, Rayder thought to himself. He went with the instruments, hoping that the next administration — still to be determined by the 2008 presidential election — would establish the climate service as a logical next step.

"I really thought that would happen," he said.

It wasn’t for lack of trying — NOAA did propose a national climate service under the Obama administration, a request that would have required a reshuffling of the agency’s resources but no extra funding. But the request died on the Hill after a Republican-led House declined to approve it, despite the concept’s origins under a Republican administration, The Washington Post reported at the time.

"I always kick myself," said Rayder, now executive director of the Alabama Water Institute. "That was a really hard lesson to learn — which was, you know what, we should have bought the climate service, established it and then handed it on to the next administration."

Still, the idea isn’t dead. In fact, it may be poised for a comeback.

The idea of a federal climate service — an agency akin to the National Weather Service, but focused on climate — recently has begun to crop back up in conversations among both lawmakers and scientists. It was the subject of a hearing held in April by the House Science, Space and Technology Subcommittee on the Environment (E&E Daily, April 22). And just last month, it was the focus at a meeting of the Board on Atmospheric Sciences and Climate (BASC), part of the National Academies of Sciences, Engineering and Medicine.

BASC member Marshall Shepherd, director of the atmospheric sciences program at the University of Georgia, recently wrote on the subject in a recent Forbes column, noting that "it is certainly time to revisit the conversation about climate services and what they mean for the society."

The concept of a national climate service has evolved somewhat over the years. Under Lautenbacher, the idea originally spun out of a need for "an authoritative source for our climate data," Rayder said — a way to organize all the government’s trusted climate information in one place and prevent confusion about how to use it.

Later, the concept expanded to include the possibility of long-range climate forecasts, looking at seasonal predictions and beyond. It was an idea that continued to take root under Jane Lubchenco, who served as NOAA administrator during the Obama administration.

Today, there’s a growing interest in climate services that could be tailored to help individual communities make decisions — everything from where and when to plant certain crops to how to protect themselves from extreme weather events. A climate services framework today may combine socioeconomic information with climate data to produce "customized products or services for various end users," Shepherd wrote.

Shepherd himself doesn’t necessarily advocate for or against a federal climate service, he said in an interview with E&E News. He simply wanted to bring the conversation to a broader audience.

It’s a relevant time for it, he added.

"I think people maybe sense the timing is right in terms of some of the changes in the administration, a lot of the money that’s being allocated in various bills, like the infrastructure bill and so forth," he told E&E News. "So perhaps there’s just sort of renewed interest, given the change in temperature in Washington, if you will."

The Regional Integrated Sciences and Assessments program supports research projects aimed at informing local climate adaptation plans. The Regional Climate Centers provide climate data on everything from drought to heat to precipitation, tailored to six regions across the country.

And federal science agencies, including NOAA, NASA and EPA, independently collect all kinds of climate data.

Advocates of a national climate service say these kinds of services could be better organized and distributed if they were housed under one umbrella.

"Those two things aren’t mutually exclusive," said Richard Moss, a senior scientist at the Joint Global Change Research Institute and a fellow at Princeton University, who testified at the House Science subcommittee hearing in April. "In other words, you can maintain the distributed system and still have the national climate information system or service."

The added value of having a national service, he added, "is that it helps people sort out which information is right for their problem."

As it is now, communities trying to plan for the future have a wide variety of information and data sources at their disposal — but they’re so spread out that it may be difficult to pull all the relevant information together.

For instance, a coastal town may want to come up with a plan to deal with future flood risks. It can look at satellite data on sea-level rise from NASA. It can look at tide gauge data from NOAA. It can look at hurricane stats and rainfall patterns from the National Weather Service. It can consult the U.S. Geological Survey for information about the landscape and the rate of shoreline erosion. And it can work with local environmental groups and climate adaptation organizations for information about how to build sea walls, levees or natural coastal protections.

A national climate service could house all these different forms of information in one place, Moss said. Such an agency "would be designed to give [communities] time-dependent information on complex risks that would also be related to the ability of their institutions to plan for those risks."

This kind of tailored service is already offered by a small but growing array of private risk analytics companies — for those who can pay for it. Jupiter Intelligence, for instance, is a rising star in the climate risk startup sphere, founded in 2016. Its clients have included industry giants such as BP and Consolidated Edison Inc., as well as major cities like New York and Miami.

But these services come at a premium not everyone can afford. Adding to the inequity is the fact that many lower-income communities are far more vulnerable to the impacts of climate change — from extreme heat to sea-level rise — than their wealthier neighbors.

A federal climate service could address the question of "the access of underserved communities who won’t have the money to pay" for private climate risk assessments, Moss said.

‘It could be a better moment’

While President Biden hasn’t publicly commented on the idea of a federal climate service, there’s reason to believe it would have support within the administration.

Former NOAA chief Lubchenco was instrumental in the previous push to establish a national climate service. She’s now serving as deputy director for climate and the environment at the White House.

And Richard Spinrad, who just last month was sworn in as NOAA administrator, was also an early supporter of a national climate service under both the George W. Bush and Obama administrations, when he served as head of NOAA’s Office of Oceanic and Atmospheric Research.

That said, the concept still could come up against some of the same hurdles it faced in the past.

To be effective, experts say, a national climate service would need to be robustly funded. As far back as 2009, Spinrad told Science that such a service would need a budget at least as large as the National Weather Service — at the time, about $900 million annually. Today, the budget is around $1.2 billion.

A federal climate service doesn’t necessarily have to be folded into NOAA, but that’s a likely landing place given that the agency already houses NWS. In that case, "it would need to have that budget without it coming at the expense of the National Weather Service, and other parts of NOAA and other parts of agencies that might house it," Shepherd said. Many scientists believe NWS is underfunded as it is.

There’s also the question of congressional support. Republicans at a recent House Science subcommittee hearing had reservations about the idea, but they may be more open than in the past.

Should another proposal emerge under the Biden administration, there are opportunities to drum up more interest this time around, advocates say. Industry support could potentially play a bigger role, suggested Rayder, the former NOAA chief of staff. There’s likely to be interest from both climate analytics firms, who draw on federal data sources, and from other companies that stand to benefit from better access to climate information.

In past pushes for a national climate service, he added, "I just don’t think we appreciated at that time how much industry could use climate data to make better business decisions."

At the same time, there "seems to be some level of bipartisan interest on the Hill" in issues of national resilience, Moss suggested. It’s a trend he says gives him hope about the expansion of federal climate services in the future.

"I think there’s a lot that’s aligning," he said.