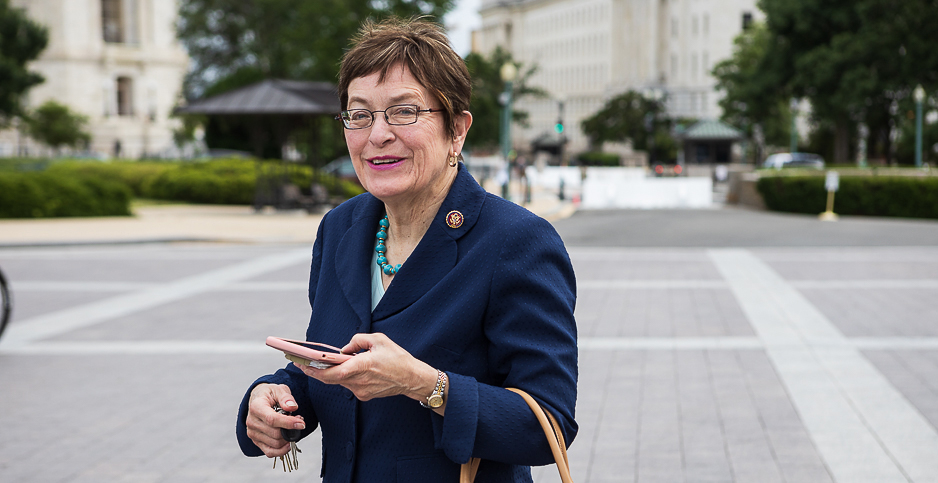 And if she’s successful in her bid for the top Democratic slot on the House Appropriations Committee in 2021, she will have more political sway to make it all happen.

"In the West, we wanted to develop an undeveloped part of America. We created the Bureau of Reclamation at the Department of Interior, which covers 17 Western states," Kaptur said during an interview. "Well, the Great Lakes need reclamation, for heaven’s sake!"

Kaptur — co-chair of the congressional Great Lakes Task Force and head of the Energy and Water Development Appropriations Subcommittee — hopes to include language in the next congressional recovery act or infrastructure bill to create a federal entity for the Great Lakes, one on par with models such as the Tennessee Valley Authority, a federally owned corporation, or the Bureau of Reclamation, an agency that oversees water resource management.

Her idea highlights what’s proved to be a politically popular issue — Great Lakes restoration — in a region that’s home to multiple swing states.

Last year, President Trump initially proposed in his fiscal 2020 budget to slash the Great Lakes Restoration Initiative (GLRI) by 90% — from $300 million to about $30 million.

But during a March 2019 campaign rally in Grand Rapids, Mich., he pivoted and said he fully supported the program. Two months later, he formally amended his fiscal 2020 budget request for Great Lakes restoration (E&E Daily, May 14, 2019). The president’s fiscal 2021 budget would also seek full funding for the program.

Kaptur said Trump’s change of heart was partially due to Republicans emphasizing the importance of the Great Lakes to the president before he took the stage.

"He faced being booed," she said.

The longest-serving woman in the House, Kaptur, 73, has represented Ohio’s 9th District since 1983, an area that centers around Toledo and includes northern Ohio bordering Michigan and Ontario, as well as portions of Cuyahoga, Erie, Lorain, Lucas and Ottawa counties.

A native of Toledo, she was first elected to Congress in 1982 and has easily held the seat since then, most recently defeating progressive newcomer Peter Rosewicz in a primary earlier this year.

She talked to E&E News about the political appetite for a new federal entity, the needs of the Great Lakes and her next political move.

What is this Great Lakes entity you’re considering creating?

In terms of the Recovery Act as well as an infrastructure bill, I’m hoping that the Great Lakes will be able to be somewhat creative, because our region — we like to say it has a blue economy, but it’s coming out of a history of heavy industrial use.

What examples are you thinking of?

The St. Lawrence Seaway system is the fourth sea coast, but it gets very little attention compared to the other three coasts. It’s the longest coastline. So I’m looking for ways to advance progress faster, and we’ve done that in our history of the country.

If you look at something like the Tennessee Valley Authority, for example, one of the dimensions of that is it helped to develop a state that was underdeveloped at that time. Even today, it’s gotten so robust that we are losing jobs, for example, from Michigan and Ohio to Alabama because Alabama can guarantee a 30-year power rate because of TVA.

Why do we need such an entity?

Our locks in the St. Lawrence Seaway are extremely old. We have a minor amount of money we use to prevent the walls from falling in. Just because of my committee position I’ve been able to help push forward the Soo Lock. Without the Soo Lock being modernized, America could not make steel and we could not conduct war. It’s that important.

Take Flint. Flint, Mich., can’t get clean water. And we’re dragging our feet as a country. Here we brag we’re the blue economy, and we can’t even get fresh water to people in Flint.

In Toledo a couple years ago, we had a massive water problem. It still exists, the algal bloom because of runoff and increasing rainfall. But the mayor shut the water off for three days because a toxic microcystin got into the water system. So we can’t drag along in terms of clean water. We have to reup much faster.

How would you create such an entity?

I am looking for a means by which to do that. I’ve talked to other members. I’ve asked for their advice. I’m talking to people on Ways and Means. I’m talking to people on the Transportation and Infrastructure Committee about what might be possible in this part of the country. It would cover an area from Buffalo and Massena [in New York] all the way west to Duluth [in Minnesota].

Any idea what you’d call it or where it would be located?

I haven’t figured all that out yet. Under my jurisdiction in Energy and Water, we have the budgets of the Bureau of Reclamation and the TVA and the Appalachian Regional Commission and the Northern Border [Regional] Commission. I’ve been looking at those instrumentalities and saying, "Hmm."

Believe it or not, the Appalachian Regional Commission’s borders go all the way up to northeastern Ohio into [Democratic Rep.] Tim Ryan’s district.

And if you start looking at how to construct a development authority that could encourage long-term financing of critical infrastructure, what would that look like? Right now, our ports are dependent on the Harbor Maintenance Tax.

We have to pass legislation to make sure that we get our fair share and that those dollars are expended and not just held by the Treasury, so that’s an annual fight.

But I keep looking at our ports with their bonding authority, and is there any part of their load that we could lift off of them as a federal government that would give them more money to partner with companies for development to incentivize new products that would help create jobs in this part of the country?

Our communities that are across this region that are older, whether it’s Buffalo, whether it’s Cleveland, Erie, Toledo, Detroit … all the way to Duluth, many of these places need modernized water systems.

Is there more that we can do for the blue economy regionally as a special federal instrument? How would we do that? Other parts of the country have it; why not us?

What’s the reaction on the Hill?

We have the GLRI, which has been a real blessing, but that’s, in a good year, $300 million, $350 million. That should be a multibillion-dollar program based on the readjustment that we have to do here.

What specific actions have you taken?

I sent a couple ideas to the Ways and Means Committee as they debate what a recovery bill might look like, and I’ve talked to some of the members on that, one of them [Democratic Rep.] Dan Kildee from Flint, another, [Democratic Rep.] Mr. Brian Higginsfrom Buffalo. I’ve been looking through the region trying to find allies.

[Republican] Congressman [David] Joyce of Ohio because he and I are — we co-chair the Great Lakes Task Force — along with [Republican Rep.] Mr. [Bill] Huizenga from Michigan and [Democratic] Congresswoman [Debbie] Dingell from Michigan. So we’re kind of batting around ideas right now.

What do you think about President Trump’s pivot on funding for the Great Lakes Restoration Initiative?

The president kicked off his campaign in my hometown of Toledo back in January. And subsequent to that, he promised everything, right? But he provided a budget that would’ve gutted the GLRI. I think they left $25 million in it or something like that.

One of the things that happened was in Michigan, when he went up there to deliver a speech in Grand Rapids, several of my compatriots on the Republican side of the aisle informed him that if he got out of that limo — and the audience in that part of Michigan is very aware of the Great Lakes, right?

It’s hard not to ask about equality right now. I’m very interested in EPA’s Office of Environmental Justice. I’m wondering if you have anything you would want to add about how to bring equality into these issues that you care about, and if you are focused on that office at all?

EPA isn’t really under my jurisdiction, [but] I work in areas that have been underinvested. It’s a particular interest of mine.

And I don’t care what you’re talking about, the number of trees that are not there anymore and the rising asthma rates for children, or the fact that there are food deserts all over this country in urban areas — even in some urban areas because the Department of Agriculture refuses to understand that they can’t only give know-how to the countryside.

They have to bring production into communities where people live. And that has been one of the most difficult fights of my career, the latest being when I called [Agriculture Secretary] Sonny Perdue when the COVID-19 onset and I said, "I think we’re gonna have food shortages, Mr. Secretary. And I know you want to rely on traditional programs, and I support them."

I said, "But I’d like you to work with me on a victory gardens program around the country where we give seed packets and we give know-how and we advanced through additional extension agents know-how in forgotten corners of America."

And he said to me, "What’s a victory garden?"

He never got back to me. He never showed any interest. It was so sad — in a secretary of Agriculture. And I can tell you, seed packets are in short supply because people have been trying, but what they’re not getting is they don’t know how to grow things.

You have said that you’re running to replace retiring Appropriations Chairwoman Nita Lowey [D-N.Y.]. How is that race going?

I am next up on the full committee, and there is opposition at least from two. I don’t know if there’ll be more. But right now, I will run based on my record of service to the country and the experience on the subcommittees.

I’ve served on a majority of them. I’ve served longer than the other candidates, who are good people, and their day will come.

I think this is an opportunity, however, for me to not just serve the country but to be a voice for this region, which is lacking in so many places at the Washington level.