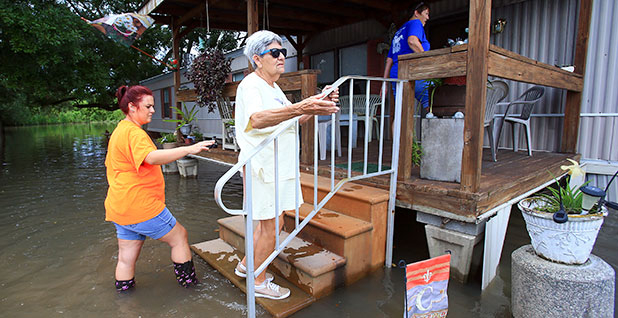 Hayley Hebert (left), Clara Cohorn (center) and Lisa Earnest walk to Cohorn's home after she was evacuated Tuesday due to rising water after recent rain in Abbeville, La. Photo courtesy of AP Images.

Over the past year alone, catastrophic rain events characterized as once-in-500-year or even once-in-1,000-year events have flooded West Virginia, Texas, Oklahoma, South Carolina and now Louisiana, sweeping in billions of dollars of property damage and deaths along with the high waters.

These extreme weather events are forcing many communities to confront what could signal a new climate change normal. Now many are asking themselves: Are they doing enough to plan for and to adapt to large rain events that climate scientists predict will become more frequent and more intense as global temperatures continue to rise?

The answer in many communities is no, it’s not enough.

They could be doing much, much more to adapt — not just people and how they respond to climate change, but homes, buildings, roads, and levees and other infrastructure, said Gavin Smith, director of the Department of Homeland Security’s Coastal Resilience Center of Excellence and a research professor at the University of North Carolina’s Department of City and Regional Planning.

One of the first shifts that must happen, many experts in hazard mitigation say, is to stop using the climate of the past to plan for the future.

"One of the great challenges is to recognize that a lot of communities, a lot of cities, a lot of human settlements in general were designed to reflect the climate of the past," said Smith, who also served as the director of the Mississippi Office of Recovery and Renewal after Hurricane Katrina.

"These issues, they are happening and they’re going to become worse, and the changes are occurring within a context where we’ve designed cities to reflect a previous climate," he said.

The 39-hour rain event in Louisiana, which killed at least nine people and flooded upward of 40,000 homes, was a radical weather system that would have done plenty of damage, global warming or no. The same was true for a July 30 flash flood in Ellicott City, Md., which killed two people and swept a wave of destruction through the historic downtown when 6 inches of rain fell over several hours.

Yet climate change also likely played a role, if mostly to intensify the amount of rainfall because of an increased amount of water vapor in the atmosphere caused by higher temperatures. It’s an emerging field of study, but climate scientists are working on models that could determine whether specific extreme weather events are caused by climate change (ClimateWire, June 14).

More frequent events could defy traditional methods of planning for floods, like using 100- and 500-year floodplain maps to plan communities and develop flood insurance rates and who has to have it. It could also radically shift how engineers and architects design buildings. Coupled with sea-level rise in some places, such rain events could also affect how emergency response teams issue storm warnings or prepare people for weather events.

They’re all factors that communities must consider as climate change creates uncertain weather patterns, said Susan Cutter, a geography professor and director of the Hazards and Vulnerability Research Institute at the University of South Carolina.

"How many of those people have built infrastructures to withstand flooding? Are they building homes in the 100- and 500-year floodplains?" said Cutter, who has helped create a federal framework for measuring community resilience to climate change and other hazards.

Some communities in Louisiana have already begun such adaptation, including requiring higher minimum elevation of new structures and requiring older ones to be raised higher to qualify for lower flood insurance rates. In some communities where Superstorm Sandy flooded homes and businesses, building codes now require construction of what’s known as freeboard, the space between where 100-year flood levels are projected to rise to in major storms or floods and the start of the building.

Cities and counties thinking about development patterns could go even further, she said. By mitigating short-term hazards like the floods they know they’ll have, they can develop the adaptive capacity for longer-term changes.

This will require a major shift in thinking, said Richard Wright, who heads the American Society of Civil Engineers’ climate adaptation committee. The society releases a report card every four years identifying old, outdated and deteriorated infrastructure across the United States. Engineers now must also think about change climate models.

"We do have our standards on minimum design loads for buildings and other structures, and our standards on flood resistance, which does look at providing adequate margins of safety," he said. "But the difficulty is that these are based on the historical records. And the thing that the climate and weather science community tells us is we can’t expect the climate weather extremes of the future to be defined by those of the past.

"We say to them, ‘That’s a problem for us. Our design criteria are based on the historical records. What will the climate and weather extremes of the future be?’ And the answer we get is: ‘We don’t know,’" he said. "This gives us a very challenging situation."

He calls for an adaptive risk management approach to make buildings and infrastructure strong enough for what science knows about climate change, and adaptable to what is unknown. Adaptive risk management, which he and other engineers once called "low-regret decisionmaking," gives local, state and federal governments more wiggle room to change things if they need to make additional adaptations to a changing climate.

"We need to work with the climate weather science community to get forecasts of what these extreme events will be over the 50- and 100-year service lives of our infrastructure," he said. "Because our design criteria, our load and resistance factors, are carefully calibrated to provide the intended level of safety. So what we need to do is understand: What will the 50- and 100-year flood be 50 and 100 years from now, not just today?"

Communities do have several tools at their disposal to protect infrastructure and plan for more extreme weather, said UNC’s Smith. One tool is what are known as hazard mitigation plans. States are required to submit the plans to the Federal Emergency Management Agency in order to qualify for federal money when disasters occur. The plans require communities to document areas of weakness and, when done well, help states figure out how to minimize damage from natural disasters.

The plans often address how to respond to flooding, whether it’s by changing development patterns, making homes and businesses less vulnerable to floodwaters, or by moving people and homes out of harm’s way with buyouts. Flooding is the most common and costly natural disaster in the United States, according to the Insurance Information Institute, and it is the most frequent reason for declaring a federal disaster.

Smith has studied the effectiveness of state hazard mitigation plans. He and his research partner found that even if communities identified their risks, there’s not often action on policies and projects to reduce their risks.

Few addressed land-use planning as a tool, for example, he said.

"These plans could be and can be a powerful tool to think about where and how to build within relations to hazards and, also within reason, to try to limit development in areas that we know are flood-prone," he said. "These plans should be proactive, not reactive."

When history is no longer a guide to the future

Last year, the Natural Resources Defense Council was among the organizations that successfully petitioned FEMA to require states to consider the effects of climate change when they update their hazard mitigation plans.

"And as we know, climate change is rendering that assumption completely void," she said. "So looking backward is not a good way to develop these plans anymore, because when you take future risk into account, the strategies that you’re going to use are going to be different than if you were just planning for your past disasters."

The first state to submit a hazard mitigation plan with climate change factored into its response was Maryland. The recently submitted plan has not yet been made public — a weakness in the process, the NRDC says, since the public doesn’t have a chance to weigh in.

Hazard mitigation plans could be effective tools for adapting communities to climate change, especially flooding that could be prevented. Congress often makes money available after a natural disaster, Hammer said, but it’s "often less politically palatable in a lot of places nowadays to invest in pre-emptive resilience action."

"We know it’s more cost-effective to take these actions up front instead of just waiting for a disaster to strike," she said. "It’s just a matter of political will and funding. That’s why we don’t see as much of this happening as we need to."

It’s never easy for communities to tackle such issues, though, especially when people are still trying to stay safe from floodwaters, mourn the loss of loved ones, and to repair their homes and businesses so they can return to work or school.

"Addressing these really complex, sometimes contentious policy issues can take years to try to think through," Smith said. "Thinking through how to make these big policy choices when people are suffering is really difficult to achieve."

But it can be vital for communities to consider such questions if they want to thrive as they adapt to climate change, he said. As they confront a new normal, asking themselves the tough questions can lead to lasting societal change in the form of lower flood insurance rates and safer, more equitable and even greener communities.

"Oftentimes the metric of success in recovery is speed. How quickly can we get back to what we knew?" Smith said. "Well, getting back to what you knew, maybe it was high risk, inequitable, a degraded environment and a poor economy. Is that what you want to return to? Changing the status quo and changing it in the aftermath of a disaster is extremely difficult."

Resilient communities will have to look beyond the next election cycle and even the inertia of human nature to adapt to climate change, Cutter said.

"At the one level it’s a political problem, it’s a resource and economic problem, but it’s also a cultural problem," she said. "We’re not thinking about protecting these assets down the line. We don’t think in the future, we think in the present."