A night of ups and downs in oil patch states 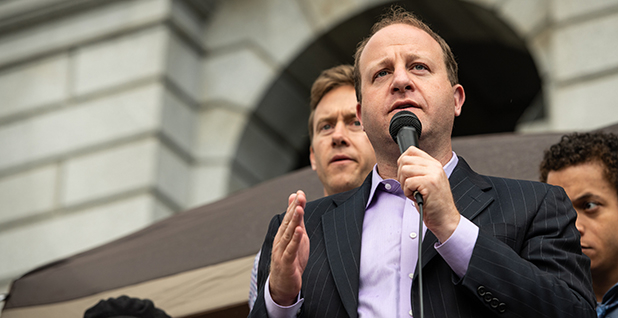 "Tonight we celebrate, and tomorrow we roll up our sleeves and get ready to work with Republicans, independents, Democrats and all Coloradans of goodwill because at the end of the day, we all believe in our children’s future, we all believe in protecting our amazing parks and open space, we all believe in saving people money on health care," Polis said during remarks that were broadcast on Facebook.

Energy development has been one of the defining issues of Colorado politics during Hickenlooper’s tenure.

The state’s oil production has more than doubled in five years as the fracking boom breathed new life into old fields north of Denver. But there have been a string of clashes and lawsuits as local governments and green groups tried to prevent drilling in the state’s rapidly growing communities.

This year, though, Polis opposed Proposition 112 as too extreme. Although he’s said he wants the state to transition to renewable electricity by 2040, he’s also called for initiatives such as full-day kindergarten and funding for statewide water projects, which could get a boost from oil and gas taxes (Greenwire, Oct. 8).

The state’s oil and gas regulators said Proposition 112 would have prevented new drilling on 85 percent of nonfederal land in Colorado. Supporters said it was necessary after an oil field explosion last year leveled a home in a Denver suburb, killing two people (Greenwire, Aug. 30).

"We’re grateful that Coloradans stood with the energy sector to oppose this measure," Dan Haley, president of the Colorado Oil and Gas Association, said in a statement. "I want every Coloradan to know that we are committed to developing our resources in a responsible manner that protects the environment and keeps our employees and communities healthy and safe."

The Florida ballot initiative, Amendment 9, amended the state constitution to prohibit oil drilling in state-controlled waters. Under a quirk in Florida’s legislative process, it was packaged with a constitutional amendment to extend the state’s smoking ban to electronic cigarettes.

There’s very little oil development in Florida, and the state already has a law against offshore drilling. Supporters said the amendment was intended to send a message to the Trump administration about the possibility of opening federal waters near Florida to drilling (Energywire, Oct. 18).

"Voters have made it loud and clear," Susan Glickman of the Southern Alliance for Clean Energy said in a statement. "We do not want offshore drilling anywhere near our coasts. It’s just not worth the risk to our environment, our economy and our way of life here in Florida."