A plea for caution as Trump’s orbit grows 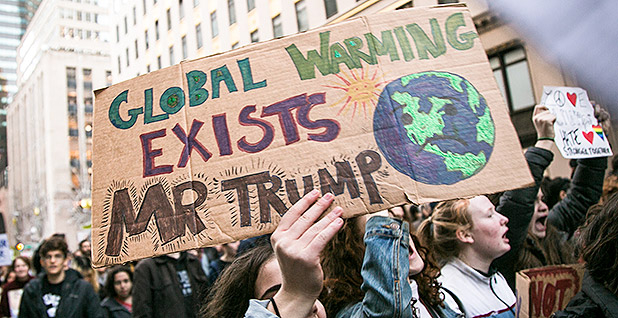 How to engage, or not engage, with President-elect Donald Trump and his advisers is shaping up to be one of the thornier questions facing the energy industry. Photo by Karla Ann Cote, courtesy of Flickr.

As energy groups of all stripes line up to oppose Donald Trump’s policies or to see what they can get from the president-elect, Ted Nordhaus wants everyone to step back and think about what’s really going on here.

"The risk for all of us," he wrote in an essay, "is that in our haste to get back to normal politics and advocacy, we normalize a dangerous turn toward authoritarianism."

Nordhaus is the co-founder and executive director of the Breakthrough Institute, an Oakland, Calif., think tank that focuses on energy, climate and technology issues. He said in an interview that he had written the post to get at what was bothering him about the response he’s seen to Trump’s rise among colleagues in the energy world: people simply going back to work, plugging away at their same old causes, as if this were a normal transition and Trump were a normal president-elect.

How to engage, or not engage, with Trump is shaping up to be one of the thornier questions facing the energy industry. Trump, Congress and his agency heads could put big-ticket items on the table for consideration or on the chopping block in his first 100 days: wind and solar tax credits, support for nuclear power, federal research dollars for emerging technology, and a new role for health and environmental regulation in a Trump administration.

In 2017, infrastructure investment could be a post-Thanksgiving Black Friday moment for the energy sector. It’s the talk of the town in Washington, and New York stock exchanges are going wild.

Yet in the two weeks Trump has had the title president-elect, he’s raised eyebrows. He moved quickly to appoint top advisers from the far-right fringe, assigned people with sharp ideological viewpoints and limited experience to reorganize federal agencies, including Energy, Interior and U.S. EPA, and he blasted The New York Times on Twitter as he argued with editors about whether the newspaper can report what he says. Meanwhile, hundreds of hate crimes and incidents of minority harassment have occurred since he won the election.

The former reality TV star’s brash and unapologetic style is the source of admiration from some and repulsion from others. Some in the repulsed column worry that Trump’s unbounded ego and vicious streak, combined with a president’s extraordinary political and cultural power, could "normalize" darker impulses of governance that warp the very fabric of America’s constitutional democracy.

For Nordhaus, the energy work he’s dedicated his career to suddenly seems secondary.

"When and if it becomes clear that democratic norms will prevail in the new Administration," he wrote, "that Trump does not intend to prosecute his political opponents, squelch dissent, and harass the free press, I will happily praise the Administration when it takes actions that I believe to be consistent with health, prosperity, equity, and environmental protection, and criticize it when it does not."

Nordhaus and his think-tank co-founder, Michael Shellenberger, made a name for themselves with their 2004 essay, "The Death of Environmentalism," which declared that the environmental movement had allowed itself to be pigeonholed as just another interest group. The Breakthrough Institute calls itself "ecomodernist." It advocates for both renewable energy and nuclear power as means to combat climate change.

Back away or double down?

Some questioned the value of such soul-searching when so much work is to be done.

"I agree we don’t want authoritarian governments, but what are we saying we’re going to do then?" asked Matt Roberts, the executive director of the Energy Storage Association, who sees opportunities to work with the Trump administration.

The issues Nordhaus raised, he said, "are quite beyond the scope of the energy industry. The solution is to double down; the solution is not to change tack."

Others were relieved to have Nordhaus voice a concern that many have felt since Trump’s stunning presidential win but hadn’t seen articulated.

"This is such a unique moment in time," said Josh Freed, a vice president for clean energy at Third Way, a think tank that explores policy with a focus on the moderate left. "If there’s an existential threat around human rights, civil rights, it’s something that was unfathomable before last week."

"This is not simply about policy differences," he went on. "This is not about how the Clean Air Act can be implemented and how carbon can be regulated. It’s not an assumption that the administration will fall one way or the other, but if it falls to the darker sides of the administration, bigger questions need to be raised about what civil society should be doing."

Nordhaus admits that he might be getting ahead of himself, since, like everyone else, he has no idea how Donald Trump will conduct himself as president. He doesn’t know what sort of priorities will emerge from the fiery and often contradictory bluster of Trump’s campaign. He doesn’t know how some of Trump’s persistent traits — a fixation on blaming the media, a vengeful attitude toward anyone who opposes him — will translate into the much more collaborative and complex job of actually being president.

Policymakers and politicians of all sorts are wrestling with how to welcome or resist the incoming Trump administration.

Vermont independent Sen. Bernie Sanders, the progressive former Democratic presidential candidate who now has a larger leadership role in the Democratic Party, says he wants to find common ground with Trump. It’s a complex calculation, since the party has declared itself a bulwark in support of civil rights, while also seeing that an accommodation with Trump could advance its interests and drive a wedge between wings of the Republican Party.

Meanwhile, Trump has continued to act in ways that defy, and perhaps redefine, what it means to be a president. From his perch high in Trump Tower in Manhattan, he has made Steve Bannon, who has been accused of ties to white supremacist causes, his chief adviser. He has signaled more enthusiasm for a relationship with Russia and its autocratic president, Vladimir Putin, than he has for the partnership with Western European democracies that has formed the basis of U.S. security for generations.

When it comes to the energy world, nowhere are the push and pull more evident than in Trump’s desire to build infrastructure.

The president-elect has declared that climate change is a "hoax" and that he wants to dismantle President Obama’s actions to limit the effects of climate change. But he has also made clear his willingness to spend heavily on infrastructure, which creates a nearly irresistible opportunity for the entire energy industry.

But, Nordhaus wrote, if Trump pursues other parts of his agenda involving illegal immigration or deportation of Muslims, and if those actions spark massive civil disobedience, then energy advocates could unwittingly find themselves swept up in currents beyond their control.

"Should the new administration take a hard turn toward authoritarianism, there will be important consequences for those who align themselves with or in opposition to it," he wrote.

"There’s not enough critical reflection on either side," he said.

He added in the essay that this question of how to engage with Trump won’t end with his inauguration.

"In the end, each of us will need to make these assessments for ourselves. Are we taking pragmatic actions to encourage the best impulses of the new administration or are we legitimizing something much darker?" he wrote. "The choice is not one that will be presented to us all at once or that we will make only once. Rather, we will be presented with it over and over again."