A rare climate Republican’s fight to keep his seat 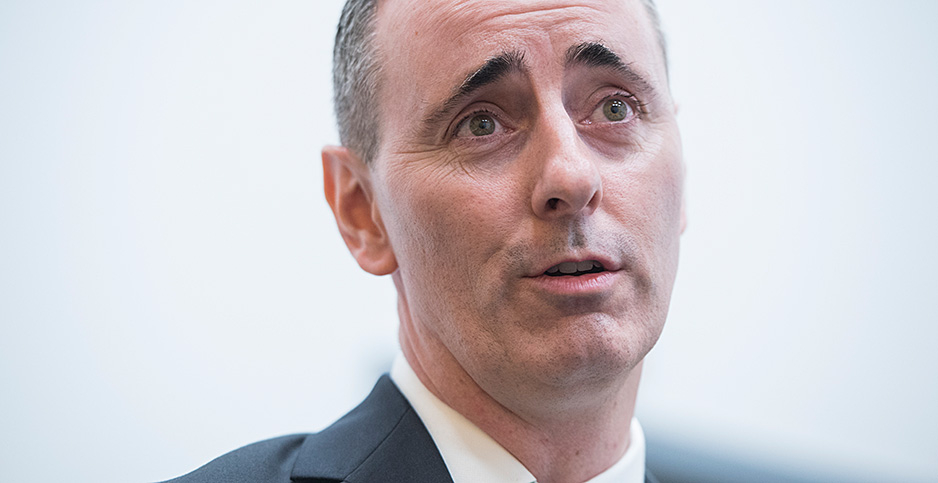 Rep. Brian Fitzpatrick (R-Pa.) is among the most environmentally minded lawmakers in the House Republican caucus. Tom Williams/CQ Roll Call/Newscom

Rep. Brian Fitzpatrick is one of the only congressional carbon tax Republicans, and he’s hoping that independent streak will be enough to fend off President Trump’s name at the top of the ticket next month.

Fitzpatrick is fighting to keep his seat in a prototypical suburban swing district — Pennsylvania’s 1st — that Democrats see as a prime opportunity to expand their House majority.

His moderate image on environmental issues and health care, a rarity in the modern GOP, has made for an unusual race against Democratic challenger Christina Finello.

And it’s drawn national attention from environmental groups, which are boosting Fitzpatrick in hopes that he can lend a bipartisan label to legislation to address everything from climate change to per- and polyfluoroalkyl substances, or PFAS.

"It’s not just that he votes pro-environment or has an overall pro-environment record," said Tiernan Sittenfeld, senior vice president of government affairs at the League of Conservation Voters, which has endorsed Fitzpatrick.

"It’s that I think he personally really cares about these issues — whether it’s the climate crisis or protecting public lands — and wants to lead on them."

COVID-19 and health care are the top issues in the contest, but LCV’s support is significant. The group has endorsed moderates like Sen. Susan Collins (R-Maine) in the past, but for the 2020 cycle, Fitzpatrick is LCV’s only endorsed Republican, a distinction he’s not shy to bring up on the campaign trail.

His rating on the group’s annual scorecard — 86% for 2019 — is also far and away the highest among Republicans.

And while LCV’s super political action committee has not spent money on Fitzpatrick’s race, EDF Action Votes has already poured in more than $100,000 to support him, according to campaign filings.

Perhaps more importantly for environmental groups, Fitzpatrick would be the last congressional Republican who supports a carbon tax — or any significant regulatory or pricing policy to reduce greenhouse gas emissions. The other, Rep. Francis Rooney (R-Fla.), is retiring.

Despite all of that, and his support for the Affordable Care Act, Democrats are betting they can tie Fitzpatrick to Trump and ride the wave, as suburban voters around the country increasingly turn away from the president.

But to Fitzpatrick, a Levittown, Pa., native whose older brother held his seat before him, the "R" next to his name is part of what makes him valuable to constituents and green groups.

"I am so much more valuable to the environmental movement being right where I am, and I think they would agree with that," Fitzpatrick said in an interview. "I’m the one that makes it a bipartisan push, and that’s a huge deal on Capitol Hill."

That dynamic has played out consistently since Democrats took the House — and Fitzpatrick managed to keep his seat — in 2018.

Fitzpatrick is also a co-chairman of the bipartisan Congressional PFAS Task Force alongside Rep. Dan Kildee (D-Mich.) and was a prominent supporter of the Great American Outdoors Act, the landmark conservation bill signed into law this year.

He’s one of a few Republican co-sponsors on two bills to tackle PFAS contamination. The "Protect Drinking Water From PFAS Act," H.R. 2377, would require EPA to set maximum contaminant levels for PFAS, while the "PFAS Right-to-Know Act," H.R. 2577, would require certain manufacturers to report their use of the chemicals to EPA.

Those measures are primarily Democratic efforts, but nonetheless, Fitzpatrick’s involvement means they can be labeled bipartisan, which generally lends credibility and additional media attention to any effort in a polarized Congress.

Bipartisan bills, Fitzpatrick said, "have so much more inherent credibility than party-line messaging bills because it shows that there’s a broader appeal."

But Fitzpatrick, an Eagle Scout and former FBI agent, is not just a name on a bill. He’s known among environmental groups and consultants who have worked with him as highly engaged and knowledgeable about environmental issues.

"He more than any other Republicans in the Congress is setting an example for the kind of environmental leadership we’d like to see," Sittenfeld said.

Plus, PFAS are a major issue for the district, which has several military air facilities that historically used firefighting foam with the chemicals.

"All that firefighting foam and the contaminants just seeped into the groundwater, and the plumes have been traveling," Fitzpatrick said. "It used to be the affected area was right around these bases. Now we’re finding plumes that have traveled through the decades, tens of miles away."

Pennsylvania’s 1st District is one of the few around the country that largely follow county lines.

President Obama and Democratic nominee Hillary Clinton narrowly won Bucks in 2012 and 2016, respectively. But Fitzpatrick or his late older brother Mike, who died earlier this year after retiring in 2016, have represented the area as Republicans for much of the last 15 years.

Bucks is trending Democratic from statewide races down to municipal elections, Ceisler said, but the Fitzpatricks are well-known in the region, and the name has long been synonymous with moderate politics.

"It’s all set up to go Democrat, and Joe Biden is going to do extremely well in Bucks County," Ceisler said. "If anyone is positioned to buck that trend, it’s Brian Fitzpatrick, and that’s because he’s recognized as being an independent voice."

The problem for Fitzpatrick could be national, namely Trump.

"Come November, Congressman Fitzpatrick will find that siding with President Trump on issues like the GOP tax giveaway to the wealthiest few at the expense of hardworking Pennsylvanians and his downplaying the seriousness of coronavirus has cost him his seat in Congress," said Courtney Rice, a spokeswoman for the Democratic Congressional Campaign Committee.

Fitzpatrick’s record on climate and the environment has been difficult for Finello, his Democratic challenger, to attack in debates and campaign materials.

But Trump’s pandemic response and Fitzpatrick’s 2017 vote for the Republican tax cut bill — which eliminated the Affordable Care Act’s individual mandate — have offered plenty of fodder.

"If he has a chance to choose between our district and voting with this party and Trump when it matters most, he always choose his party and Trump," Finello said at a debate earlier this month. "And he’s not the independent that he claims to be."

Finello took a commanding primary victory in June. Her campaign struggled early to keep up with Fitzpatrick’s fundraising, but the most recent quarter helped close part of the gap.

Both candidates raised more than $900,000 in the recent quarter, but Fitzpatrick has still outraised Finello significantly in the 2020 cycle, according to records filed with the Federal Election Commission.

He also holds a significant cash-on-hand advantage heading into the final weeks of the election with nearly $1.4 million compared with Finello’s $555,000.

Finello has her own bona fides that observers and Democratic activists believe make her a good fit for the district in her own right.

She, too, grew up in Bucks County and is a former deputy director of the Bucks County Division of Housing and Human Services.

She’s a mother of two daughters with endorsements from major women’s abortion rights advocacy groups, and she holds a law degree and a Ph.D. in clinical psychology.

With her background close at hand, Finello has tailored her message to working-class voters and especially to women in the suburban district, who Democrats are hoping will turn away from Trump in droves this year.

"The reason I’m running is I want to give our neighbors a voice in Congress," Finello said during an event with Jill Biden earlier this week. "I want to fight for issues that moms and families care about."

And at one point during a debate this month, Finello noted that she lives "in a place where the water has been bad for most of my life."

"Voters in the Philadelphia suburbs are ready for a representative who has lived through the issues they care about, and that’s Christina," Rice of DCCC said.

DCCC and other tendrils of the party are willing to make that bet. DCCC put Finello on its list of top flip opportunities and has invested in a coordinated TV ad buy with her campaign.

National election watchers are giving Fitzpatrick the edge for now, but the race is likely to come down to the wire, even with Joe Biden likely to clean up in Bucks County.

A survey earlier this month from the Democratic firm Public Policy Polling found Fitzpatrick trailing Finello 47% to 46%, within the margin of error. That’s despite Biden holding a double-digit lead in the same poll.

Green groups will be watching closely, and Fitzpatrick said his "ultimate goal" is to take politics out of climate change and water policy — to make them nonpartisan issues with long-term solutions.

That could be quixotic thinking in a time when Trump causes visceral reactions on both sides of the aisle and when Democrats are considering getting rid of the filibuster to pass partisan legislation if they win the Senate.

But despite signs around the country that suburban voters are shifting overwhelmingly to Democrats in rebellion against Trump’s harsh rhetoric, Fitzpatrick might just keep enough distance to earn another term.

"I don’t think you want only one party advocating for an idea that should be universal."